Captain America: Civil War is as purely enjoyable and satisfying in basic cinematic terms as it is an admirably efficient component in the greater Marvel machinery.

Captain America: Civil War is as purely enjoyable and satisfying in basic cinematic terms as it is an admirably efficient component in the greater Marvel machinery.

At this point, I honestly don’t know how you measure the success of the Marvel Cinematic Universe. It’s getting ridiculous. Thirteen movies across almost a decade, not a single one of them legitimately bad, and many of them genuinely excellent. Ten billion dollars – the GDP of Malta – at the box office; an endless river of merchandise and DVD dinero weaving tributaries across the globe. Enough cultural cache to cleave a great divide between film critics – the high-minded purists of yesteryear on one front, lamenting the death of originality, and the coffee-soaked Millennial know-it-all’s on the other, asking who needs it. And then there’s me, somewhere in the middle, wondering how everyone is getting so worked up over an argument between two blokes called Tony and Steve.

Not to diminish it all, obviously. Calling the ruckus between Iron Man and Captain America a “civil war” might be a bit grandiose, but I’m with you. I’m invested. I enjoy the overwhelming silliness underpinning the whole enterprise. This is a franchise which unashamedly answers most narrative questions with the phrase, “because of a magic stone”. And there’s nothing wrong with that. It’s just that my personal metric for the success of these movies is in how capably they make me forget it.

By that metric, Captain America: Civil War might well be the finest Marvel release to date, in large part because it’s an argument between Tony and Steve and not, say, between Tony, Steve and some world-eating cosmic deity. There’s an intimacy to the stakes that’s atypical of a superhero blockbuster, and an emotional density that only sustains itself because it can come up for air in the cracks between twelve prior movies. The hard work is already done. We know these characters, we like them, we understand them, and so it’s okay if the movie doesn’t devote an hour to painstakingly reiterating their backgrounds and motivations.

As a result, Civil War feels less like the previous two Captain America movies (The First Avenger in 2011; The Winter Soldier in 2014) and more like 2012’s The Avengers, which similarly assembled characters we already knew and built the dramatic conflict atop their existing attitudes and relationships. In fact, Civil War is a much better thematic continuation of that movie than its own sequel was, mostly because the central plot is so comparatively narrow. Age of Ultron was the first MCU feature to feel truly overburdened by its obligations to the broader continuity, whereas Civil War is richer and more self-assured thanks entirely to its specific place within it. One is a condemnation of Marvel’s shared-universe methodology, and the other is by far the greatest justification for its existence. Which is odd, when you think about it. 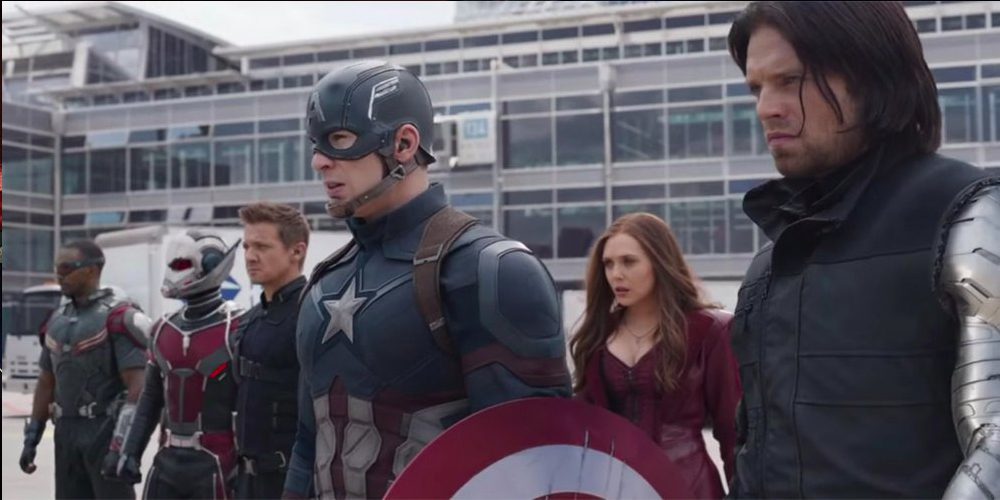 It also begs an obvious question: Is this a Captain America movie, or an Avengers movie? The answer is both, to varying degrees, but given that Civil War directly continues the Winter Soldier storyline and is both kick-started and propelled along by Steve Rogers’ questionable decisions, it’s very much Captain America 3 above all else. And it’s better for it. Yes, because the movie largely deals with themes of moral accountability and personal sacrifice for the greater good, which Cap more or less embodies, but also because it allows existing characters to be fleshed out, and a couple of new ones to be introduced, in a way that actually complements the main plot rather than weighing it down.

That plot, as you probably deduced from the trailers, revolves around an ideological schism that divides the Avengers essentially in two; one side led by Iron Man (Robert Downey Jr.) and the other by Captain America (Chris Evans). After a mission in Lagos results in the death of several innocent humanitarian workers, the United Nations step in to pass the Sokovia Accords, which will strip the Avengers of their autonomy and assure that any subsequent avenging will be approved and controlled by an oversight committee. Tony for, Steve against. But then the conference held to ratify the accords is interrupted by a terrorist attack – one which is swiftly blamed on Steve’s brainwashed bestie Bucky Barnes (Sebastian Stan), and which results in the death of a signatory whose son, T’Challa (Chadwick Boseman), dons the family’s ceremonial Black Panther battle armour and sets out to find and kill the assassin himself.

The whole movie works like this, with Steve (now rogue) and Black Panther pursuing Bucky, and Tony pursuing Steve, and another minor villain pursuing some other people, and the UN pursuing everyone. It isn’t a structure that should work, and in most other genre movies it wouldn’t, but it does here because all the explicatory downtime that’s missing wasn’t needed to begin with. The movie devotes just enough time to each adjacent character that the audience can figure out their post-Ultron headspace: Vision (Paul Bettany) is grappling with the nature of his being; Scarlet Witch (Elizabeth Olsen) is trying to fathom the immensity of her powers; Hawkeye (Jeremy Renner) is looking for any excuse to escape a life of quiet domesticity with his boring wife and kids; and Black Widow (Scarlett Johansson) is weighing her agreement with Tony’s stance against her loyalty to Steve. It’s exactly as complex as it needs to be for each of these characters to fall organically on one side of the dividing line or the other, without hampering the pacing or cluttering up the central conflict.

That underlying conflict is, in many ways, quite a childish disagreement. Iron Man’s condemnation of Bucky is built on extremely flimsy circumstantial evidence, while Cap is convinced of his friend’s innocence without really considering the fact that he absolutely is an ex-HYDRA cyborg assassin. It’s all a bit muddled in macho melodrama. But the reason it works so well is that the basic assassination plot, while well-done, is intentionally superfluous. It doesn’t really matter. The universe isn’t hanging in the balance. But the capital-U Universe, or at least its status quo, absolutely is, and the emotion-driven character work that has always been the beating heart of Marvel’s stories here coalesces into a long-form storytelling masterclass of a kind you rarely (if ever) see at the movies. Iron Man and Captain America aren’t fighting because they disagree over Bucky’s innocence, but because they’re each individually trying to deal with deep-seated character flaws and personal grievances that have developed over the last eight years’ worth of movies. And that stuff doesn’t necessarily go away just because the catalysing mysteries have been solved. 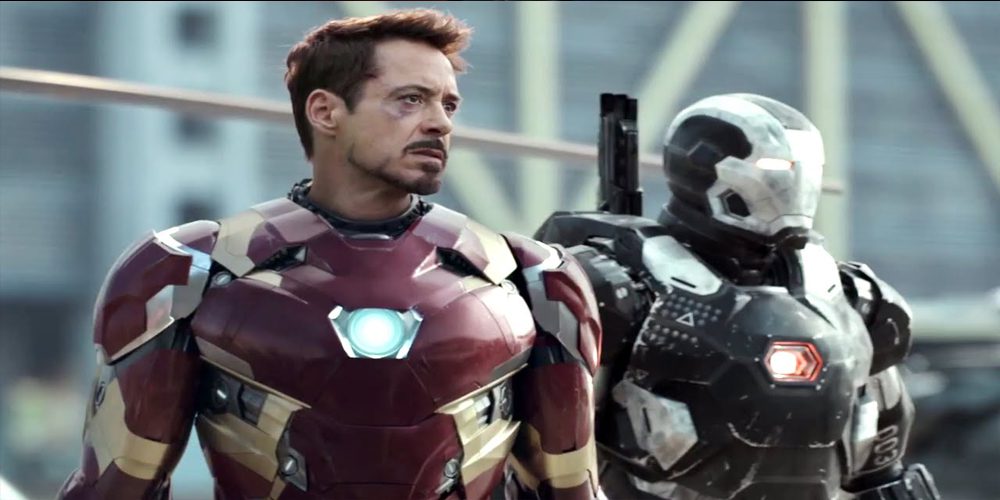 If you think that sounds like an oddly downbeat dramatic throughline for a movie about colourful superheroes then you’d be right, but that kind of risky, offbeat storytelling is a large part of why the MCU is so fascinating to so many people. And even considering the fact that Marvel ushered in the continuity-driven franchise-filmmaking zeitgeist in the first place, and are naturally best-suited to working within it, it’s still surprising to see such an emotionally-complex narrative be this compelling and this much fun.

That’s the most important thing. Civil War is as purely enjoyable and satisfying in basic cinematic terms as it is an admirably efficient component in the greater Marvel machinery. For all its gloss and enjoyable patter, Joss Whedon’s Age of Ultron never quite established itself as anything more than an unwieldy two-hour advertisement. But Civil War, directed by Joe and Anthony Russo from a screenplay by Christopher Markus and Stephen McFeely, ensures that all its calls backwards and looks forward are in service of the here and now. So Black Panther’s introductory character arc intersects organically with those of Tony, Bucky and Steve. Spider-Man’s debut adds needed warmth and complexity to Tony’s character. Ant-Man can show up simply because he’s excited about the prospect of fighting alongside Captain America. And they can all take part in the ludicrous sequence at the end of the second act, which is undoubtedly the best piece of action cinematography the genre has ever managed to deliver.

It was during this sequence, which is every bit as ridiculous and ridiculously-satisfying as you’ve heard, that it started to dawn on me how much I really do enjoy these characters; how invested I am in their personal struggles, and how excited it makes me that Disney and Marvel have scheduled more of them all the way into the next decade. This was surprising to me. I didn’t grow up reading comic books. The movie versions of these characters are the only ones I know. That I feel like I know them at all is a storytelling feat in itself. And I suppose that brings me all the way back to the question I posited way up at the top. How do you measure the success of the Marvel Cinematic Universe? The answer: By how much you care about two blokes called Tony and Steve.