Exodus: Gods and Kings, Ridley Scott’s epic bible-blockbuster, cost $140 million to make. It stars Christian Bale and his horse, which he rides across the desert a lot, and Joel Edgerton in a flamboyant gold headdress and makeup. Somehow nobody but me thought a better title would have been Gods and Queens.

Perhaps I’m asking for a little more self-awareness than you could reasonably expect from a creative team that cast Bale as Moses, Edgerton as an Egyptian pharaoh and Aaron Paul as – brace yourselves – an oppressed Jew. Not that the so-called “whitewashing” of Hollywood is anything new, or that accusations of it aren’t occasionally short-sighted or overblown, but on a scale where 1 is the Milky Bar Kid and 10 is, let’s say, Yelawolf, Christian Bale is a solid 2. He’s Welsh, for f**k’s sake. And it’s noticeable when a Welshman is gallivanting around Ancient Egypt and the Middle East, particularly when gallivanting is basically all he’s doing for an entire movie. The cast aren’t so much playing roles as wearing costumes and props that dictate their acting for them. And Scott has employed that hilariously tone-deaf cliché of a character’s evilness being directly proportionate to how much bronzer and eye-liner they’re wearing. Although based on some of my previous relationships he might have a point about that.

I don’t think Exodus: Gods and Kings is racist. But I do think it’s stupid, and sometimes that’s the same thing. Worse, it’s boring. I fell asleep about halfway through. When I woke up I couldn’t work out how much I’d missed. The same characters seemed to be doing the same things in the same places. The camera’s attention was still mostly occupied with big, sweeping shots of large groups of slaves, sometimes building monuments, other times moving from one place to another. I asked a friend I was with what had happened during my nap: “Nothing”, he replied.

You can expect a degree of laziness in a retelling of the Book of Exodus, given that most people are already familiar with it. (Less familiar, it seems, with Ancient Egypt probably being multi-racial throughout much of its history, but details.) If you’ve somehow avoided the Moses story until now, here’s the setup: Moses (Bale) and Ramses (Edgerton) are Egyptian royals who have been raised as brothers their entire lives. As it turns out, they’re not actually blood relatives; Moses is really Jewish, which is bad and against the rules, so Ramses banishes him to the desert where he can be all Jewish in peace and isolation. This is the first prolonged period of contemplative horse riding, which Ridley Scott seems to be very fond of. Moses and his horse encounter a tribe of Midianites, who take him in, and as far as I can tell he falls in love with the very first female he meets. She takes him to bed on their wedding night and asks him a lot of probing questions (she probably should have asked him those when they first met, but, again, details) and then literally instructs him to “proceed”. I know very little about Midianite tribal culture, but it honestly seems alright. 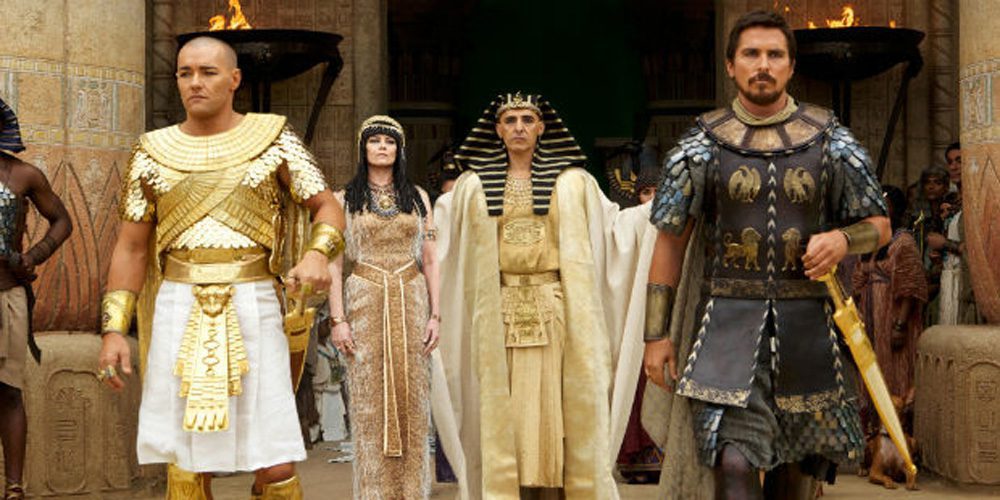 Anyway. Moses gets whacked on the head during a rock slide, and while he’s floating through delirium God appears to him (in the form of a petulant little British boy – a touch I rather liked) and explains that not only is Moses a Jew, he’s also the prophesised deliverer of the kingdom’s population of Hebrew slaves. He might also be some other things I didn’t quite catch, but I was still a little bleary-eyed from dozing and I wasn’t entirely sure if Moses was dreaming or I was. Oh, he’s also a fearsome military general in this version of the story, so, with the help of God, he sets out to build a Hebrew army. Ramses, meanwhile, has adopted the mantle of pharaoh, and has discovered he’s even worse at dynastic rule than he is at fighting. Not to undermine Moses or anything, but given his range of expertise, the quality of his opposition and the fact he’s being coached and cornered by God himself, this seems like a pretty easy gig.

And it does turn out to be pretty easy. Sure, there’re some logistical problems along the way, but it’s mostly smooth sailing from one major visual beat to the next. Ridley Scott is so enamoured by the Ten Plagues passages that any scene which doesn’t involve locusts, crocodiles, flies and boils is so nakedly uninteresting to him as a filmmaker that they’re tortuous to us as an audience. Over the past few years, Scott has been popularly – and rightly – criticised for handpicking projects based almost entirely on which iconic scenes he can film, largely disregarding things like narrative engagement and character development. That’s Exodus in a nutshell. The FX budget is flexed proudly and often, and I’m sure you won’t be surprised to hear that a visually-competent filmmaker has produced a fair few visually-impressive scenes of suffering and destruction. There’s just nothing interesting or inventive about them. Some of the reinterpretations are also even dopier than they were originally, which is an incredible achievement. Perhaps, if the connective tissue was a little thicker, these scenes could be taken for what they are – glossy, insubstantial showboating. But these scenes are all Exodus: Gods and Kings has to offer. All that exists between them is the impatient tapping of sandaled feet. The gloss is everything. And the gloss isn’t enough.

You’d think such a star-studded line-up could potentially salvage the weak material. You can rely on someone like Christian Bale to overcommit to a role. But the performance he phones in is lifeless, and stifled by a checklist of traditionally masculine traits that hem his Moses into an idea of heroism. Warrior? Check. Military tactician? Check. Deliverer of the innocent? Check. Chummy with God? Check and mate. It’s not engaging, and especially not when everyone else is mincing around playing dress-up. Then again, that’s annoying in itself. Scott wields camp like a bludgeon. Ramses plays with giant snakes. The useless palace soothsayers make prognostications by fondling entrails. Sigourney Weaver occasionally turns up as Ramses’s mother, Tuya, and she turns a handful of nothing scenes into the most enjoyable part in the movie. She knows how to sell the flamboyance. Everyone else is pushing it at a discount.

It’s a shame, because if Exodus: Gods and Kings wasn’t so self-serious and dreary it could potentially be fabulous. The constituent parts are there. But I haven’t spoken to a single person who liked any of those parts on their own or together, which is odd considering how much room there is in a two-and-a-half-hour running time for something – anything, I suppose – even remotely appealing. It’s all thoughtless visual excess and the odd consolatory scene, like a speeding-chariots sequence thrown in solely so the horses and the chariots and the drivers can all stupidly tumble off a cliff. That happens in the final 45 minutes; a desperate stretch so determined to drag us through to the denouement that it’s frankly quite embarrassing. All this, to part the Red Sea. What an anti-climax. It’s like emptying a giant bathtub.