Unbroken, the second directorial feature from Angelina Jolie, is the life story of US Olympian Louis Zamperini; who has at various stages of his life been an Italian immigrant, a record-breaking long-distance runner, a bombardier in World War II, a man who spent 47 days stranded on a raft in the Pacific Ocean, a prisoner in a Japanese POW camp, an alcoholic, a born-again Christian and, latterly, an inspirational speaker with a penchant for forgiveness, who managed to meet almost all of his former captors in person and make his peace with them before he died at the ripe age of 97 in 2014.

When you’re dealing with a man like that, the idea of combing through the movie which chronicles his extraordinary life seems akin to blasphemy, especially when it’s played so earnestly. One can’t help but feel some degree of consternation about highlighting what does or doesn’t work. And problematically, most of Unbroken doesn’t work at all.

Thankfully though, none of the problems with Unbroken can be laid at the feet of Jack O’Connell, an actor I’ve been rooting for since his role as James Cook in the E4 series Skins way back in 2009, and someone who I recently lavished with praise after his electrifying performance in David Mackenzie’s prison drama Starred Up. He’s incredible throughout, he’s still a megastar in the making, and he’s just one or two more fortunate casting choices short of becoming a household name. Good for him.

No, my issues with Unbroken don’t have anything to do with O’Connell or, for that matter, any of the other performances, which are impressive pretty much across the board. I’m put off by the gloss. I don’t like the Hollywood sheen, or the programmatic way it cycles through expected “prestige biopic” beats, or the lathered-on sentimentality. It’s hurt by artistic constraint, wounded by formula, diluted by committee. And it’s a shame that a true hero, an inspirational man who we can’t help but root for throughout, is immortalized in a movie which can’t live up to the life it chronicles.

Not that Unbroken isn’t made with a high level of technical skill; Jolie undoubtedly has talent, and one day she’ll probably make a truly excellent film. This isn’t that day, though. The artificiality pervades every scene, and despite an effective opening and an incredibly strong centrepiece, everything else is either at best significantly less effective or, at worst, a genuine slog to sit through. 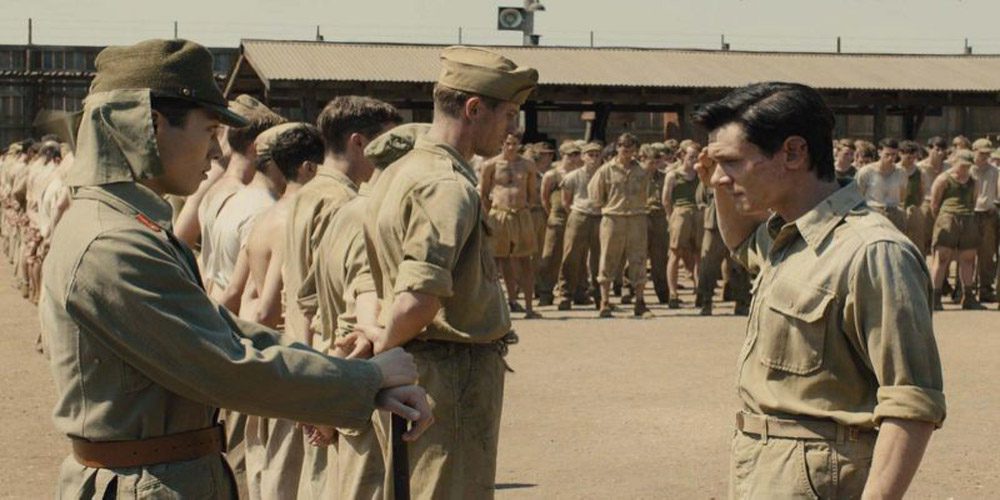 That opening is a well-staged and powerfully shot sequence of aerial combat high above the Pacific. Zamperini’s plane has the fragility of one folded into existence out of paper; enemy gunfire has lethal weight, and the claustrophobic space is appropriately detailed. But when Louis sweats, or bleeds, the liquid rolls atop his carefully-applied foundation. The camera sweeps across the kind of vistas which, if they were framed and hung on a gallery wall, would sell for thousands. We can hear the whirring cogs of the cinematography as clearly as the engines of the aircraft.

Unbroken’s strengths and weaknesses are all present in this opening sequence. The tragedy and suffering – that’s real. The actors all believe in it. But its depiction is too refined, too genteel, and too pretty, to hit with the impact it needs to.

These snapshots of Louis’ military service are woven among those of his childhood and career as a distance runner. As a kid, he was bullied for his Italian ancestry and tended towards hell-raising as a means of rebellion. His older brother, Pete, got him involved in the school track team as a way of counteracting that knack for trouble; running was a conduit through which Louis could achieve success, but also social acceptance. He had a point to prove, a grit and determination which complemented his natural talent. The bullies still led the pack for the most part, but they would give in to exhaustion. Louis wouldn’t. So, he won, and he kept winning, until he eventually qualified to run the 5,000 metres in the 1936 Summer Olympics in Berlin, Germany – to this day the youngest athlete to ever do so.

These early scenes are a little on-the-nose and tend towards melodrama, but there’s nothing overtly wrong with them outside of that. Athletics is a fairly straightforward narrative space. Win or lose. The stakes are pre-packaged. Louis is the kind of runner who hangs out at the back until his opponents have all but given in, then explodes forwards. I don’t know if he really ran like that, or if it’s a metaphor for his against-all-odds character. It doesn’t matter either way.

Unbroken is only concerned with three portions of Louis’ life. His childhood, athletic career and brief military service are the first of them. The second, and by far the most compelling, is that which sees him stranded aboard a life raft in the Pacific, along with crewmates “Phil” Phillips and Francis “Mac” McNamara. These sequences have a focus and a purpose which the rest of the film lacks. The desperation is tangible. As the conditions of hunger, dehydration and exhaustion begin to take their toll, there’s fragility to their predicament, as though they are always only one day away from tragedy. 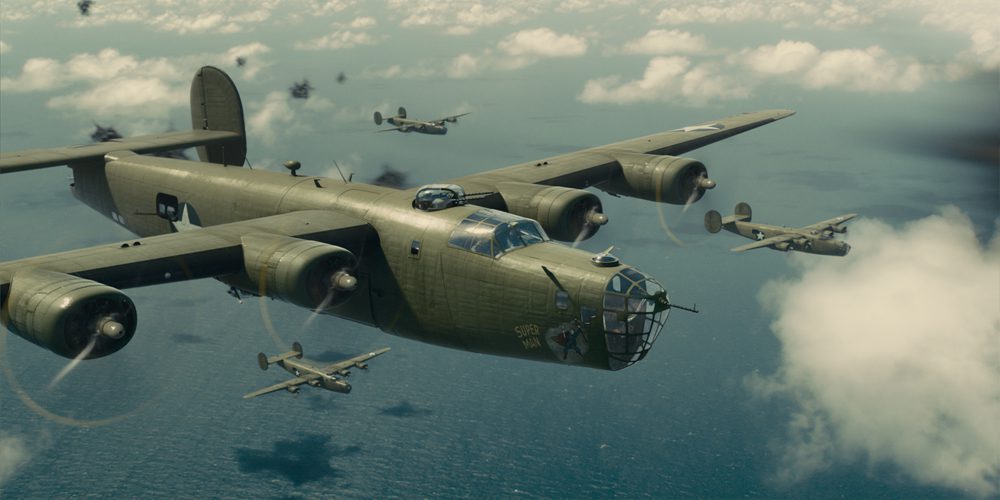 All of this is abandoned, though, when the movie motors into its second half; here, captured after 47 days adrift, Louis is subjected to the horrendous conditions and hard labour of a Japanese Prisoner of War camp, and Jolie, unable to properly convey a true sense of danger, instead begins to cycle through rote genre motions. The pace slows to a crawl. There’s a distinct lack of blood, or edge, or even dirt – far too many of the prisoners have salon haircuts and sparkling white teeth. It’s curious, how an act as inherently barbaric as the enslavement of human beings, can be depicted in such a reserved, anodyne way. Unbroken is hurt immeasurably by how weirdly safe these moments feel; the stick carried around by the distractingly-unassuming Sergeant “Bird” Watanabe is no substitute for the circling shark fins that haunted Louis’ tortuous days aboard the raft.

If I was asked to make a list of movies I’m most disappointed about not having liked, this would land somewhere near the top. I’m a huge fan of O’Connell, an admirer of Jolie (though not necessarily for her directing chops), and Unbroken conveys a true story worth telling from a perspective of admiration, compassion and respect. In a way though, that’s the problem.

Despite the smart casting, often-effective staging and the excellent centrepiece, Zamperini’s story becomes strangely dull. Unbroken is hesitant to visit real horror upon its hero, and O’Connell is such a beacon of stoicism that the long, repetitive stretches wherein he gets beaten or starved never give the slightest hint that they’re going to break him. We know he can take it. And because we can’t feel his plight, we don’t have the emotional response to it that the movie so desperately would like us to. Unbroken is not “bad” by any means, but it is disappointing enough that it simply can’t register as strongly as it should.