Winter is here. With spoilers, obviously.

There’s always some detective work to be done when you return to a complex series, even one that is, pretty inarguably at this point, the most popular and feverishly-discussed in the history of television. You spend some time rifling through the last season’s Wikipedia page, reorganising events in your mind, trying to remember who died, and what whoever lived was last up to. The seventh season of Game of Thrones premiered in the early hours of Monday morning, and its first episode, “Dragonstone”, has you covered. In it, Cersei Lannister, Queen of the Seven Kingdoms and of Plot Exposition, has drawn a map. Well, had a map drawn for her; she’s a queen, after all. The map is of Westeros, painted onto the floor, and as Cersei stands atop it, she points at each place she references, which are all helpfully labelled and illustrated. Her brother, Jamie, narrates. “Invaders to the east, pretenders to the north, here I am, stuck in the middle with you.” I’m paraphrasing. But it wouldn’t be unlike Game of Thrones to break into song at this point. Ed Sheeran does show up for a fireside cameo. Then again, this has always been a show that put snaggle-toothed ginger northerners at something of a premium.

You know what I noticed, in that map scene? This show isn’t half as complex as it used to be. And that’s a great thing. Unlike George RR Martin’s novels, which pile chunks of plot atop each other in a giant, insurmountable storytelling slagheap, the showrunners have decided to diet Game of Thrones. It’s leaner, fitter, sexier. Surer of itself and it’s storytelling than it has been in a long time, and it’s thanks to good old Cersei again. At the end of last season she quite literally detonated a handful of major subplots that had been bubbling away for ages; Queen Margaery’s political plotting, the High Sparrow’s dogmatic oppression, all vaporised in a flash of green. Good riddance, if you ask me. There’re only two seasons left. Winter’s here. It’s time to wrap up warm and chew on the fat of all the juicy stuff that has been maturing over the last seven years.

Here’s one: The Freys. Can’t let those fellas off the hook, can we? Oh, no, says Arya Stark, who ended last season by baking Walder’s sons into a pie and watching him eat them, before slashing his perverted old gullet. “Dragonstone” opens with her wearing his face, addressing his assembled men. A toast, she says, to the Starks you all butchered at the Red Wedding. Their cartoonishly evil cackling might have been a bit on-the-nose, I guess, but it sure was worth it watching them all puke their guts up afterward. Poisoned the wine, hadn’t she? Genius. I’m tempted to ask all sorts of questions. (Just how does this face-swapping thing work? Has anyone explained this?) But I’ve been all in on Arya’s awesomeness for a while, and I won’t complain about offing the f*****g Freys.

Off we pop to the Wall, the practical and existential barrier between Westeros and the encroaching White Walkers, who emerge from a gathering front of clouds in a shot that reminded me immediately of how great this show looks. Also at the Wall: Meera and Bran in his little twig-sled, both of whom are allowed entry by Edd, who’s currently Lord Commander of the Night’s Watch despite never having being elected as far as I recall. Oh, s**t, Jon is here too – in the general vicinity, at least, planning the North’s defences with the other northern lords. There’s a bit of a fracas between him and Sansa, who publicly undermines him (that bitch!) and shares a lot of significant glances with Littlefinger, who seems to get a bit turned on by her being confrontational. Scheming, he is. We all know it.

For what it’s worth, I quite enjoy the dynamic between Sansa’s cynicism and Jon’s idealism. It’s expressed here through a decision about what to do with the lands and castles of Houses Karstark and Umber, who fought for Ramsay last season. The sons and daughters of those houses are brought before Jon to pledge fealty, and the music swells so convincingly that you really do believe this is a moment of real significance, despite the fact we’ve never met the son or daughter before and it doesn’t really mean anything.

Meanwhile, in the south, Euron Greyjoy is back with a thousand ships. No, not the thousand ships that Theon and Yara nicked last season – Daenerys has those. Another thousand ships that he presumably had built in the interim. He offers them to Cersei for her incestuous hand in marriage; an offer that she quite reasonably declines, at least until he can prove his trustworthiness. He promises not to return until he has done so, with a gift that he doesn’t specify. I expect, knowing him, that it’ll involve murder. Possibly drowning, too.

In Oldtown, at the Citadel, Samwell Tarly is attempting to learn about the White Walkers, and failing miserably. He’s too busy emptying bedpans, ladling soup, and weighing the organs of dead alcoholics; menial tasks stapled together into a lovely little montage which treats Sam’s retching like percussion. He’s a new arrival, after all, so he doesn’t have access to the super-secret section of the library reserved for Maesters. By episode’s end he will, of course, and he’ll lift a few books from there which hint at obsidian deposits under Dragonstone. All roads must converge on the way to the episode title.

(Also at the Citadel is Jorah Mormont of House Friendzone. You only see his scaly arm and his shadowed face in profile, but you can always hear the tell-tale pining in his voice.) 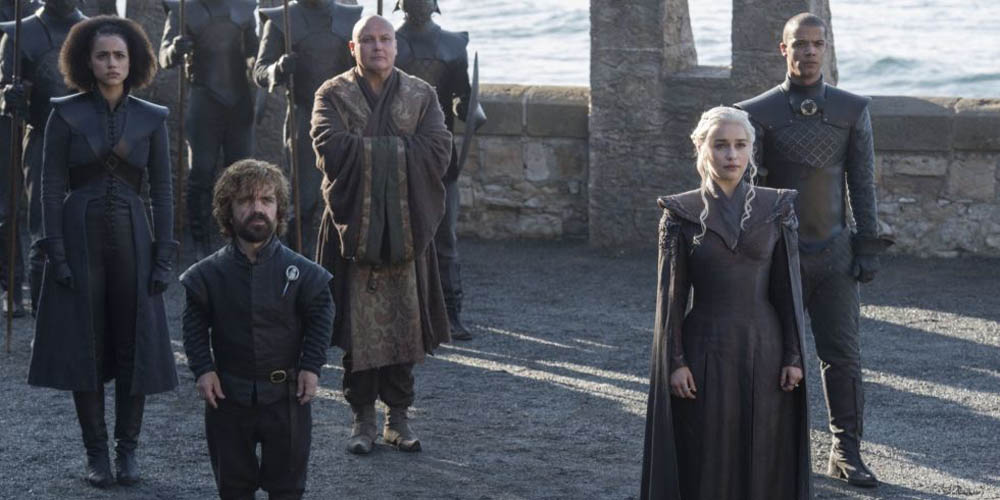 We can spare a moment for the Hound, can’t we? Yes, we can, especially since he’s become the show’s low-key heart. He has an affecting clutch of scenes in which he sees a vision in a fireplace and buries two people whom I’m fairly sure he robbed while travelling with Arya in a previous season. “I’m sorry you’re dead,” he says. Wonderful. The heart of the show, indeed.

I know what you’re waiting for: Dany’s long-awaited arrival on the shores on Westeros. Go team! She arrives at Dragonstone (which is suspiciously deserted for a fortress of such strategic importance) along with her diverse entourage. She’s treated to no less than two scenes of doors slowly opening while momentous music swells. She’s presented with a map; not entirely dissimilar from the one Cersei was trampling over earlier in the episode. This is kind of what “Dragonstone”, as an episode, has been about, really. Setting up the game’s board. Repositioning the pieces. It was a great premiere not in the sense that a lot happened, but because you didn’t care that almost nothing happened at all.

Dany stood before that board says it: A new player has taken up the game of thrones. And, flanked by the newly-sober Tyrion and the masterfully manipulative Varys, she has the best pieces on the board.

She said it better than I could, I guess. “Shall we begin?”

Enjoyed reading this recap? Then you will probably like listening to us too so check out our podcast