Despite my damning statement in week 4 where I flatly declared that this is no longer the show it used to be, you are still here. By episode six you should really be engrossed and hand-picking your dark horse. Instead, we are constantly mulling over why we religiously dedicate every Wednesday at 9pm to worship Lord Sugar. Sometimes it is hard to let go of a series you once adored, but then again The Apprentice is doing little for us to fall back in love with. Week six is titled “Bruges Tour” and as you can guess by the title, the candidates were set a task to create a tour guide in the historic city.

How did the candidates do in “Bruges Tour”?

Absolutely awful but for some reason, I have to concede. Week six was enjoyable to a certain extent. I think it is because tour guides are intensively customer facing, so the reactions of how dreadful the candidates perform are clear on their miserable faces. I also do not like tour guides, so to witness two side by side, extremely unorganised and unplanned, was thoroughly entertaining. The Apprentice should be renamed to The Clowns. In terms of who took the hot seats, Elizabeth McKenna managed Graphene and Sarah Jayne Clarke led Vitality.

Episode six was a tale of the opposites. Whilst Team Graphene decided to go for the “Modern” Bruges Tour (despite protests against Elizabeth’s idea) with Segways and chocolates, team Vitality went for the “Historical” Bruges tour, with horse carts and beer.

Both historical and modern Bruges were not represented at all and as forecasted the candidates managed to make the entire task a circus.

What were the blunders in week six?

Charles not knowing where the hospital is located was the most frustrating moment of “Bruges Tour”. You could almost see the depression sinking into the customers as they walked around the entire building to try to find an entrance. The bumbling buffoon failed to realise the entrance of the hospital was inside the church. He does not even figure it out! If I was one of the customers I would have walked away, as most of the tour was walking aimlessly whilst the supposed tour guides argued over their maps. Charles has one of those faces, coupled with a personality that you would just like to punch. You know what I mean.

Blunder of the week?

Surprisingly, Charles did not conjure the biggest blunder in week six. Quite possibly the most devastating and cringing mistake so far in this series of The Apprentice was by the overcompensating Andrew Brady. Whilst selling the tickets he told the customers there would be plenty of beer. Not beer tasting. Just beer. It was beer tasting.

Imagine pumping yourself up for a Bruges History Beer Tour, and inside your head, you are more excited for the alcohol than the tour, and after hours of walking around not really knowing where you are going or what you are doing, you are provided with drops of beer to taste. The consolation prize? Two bottles to take home with you. Bargain. In reality, this is the result of a stinky salesman. 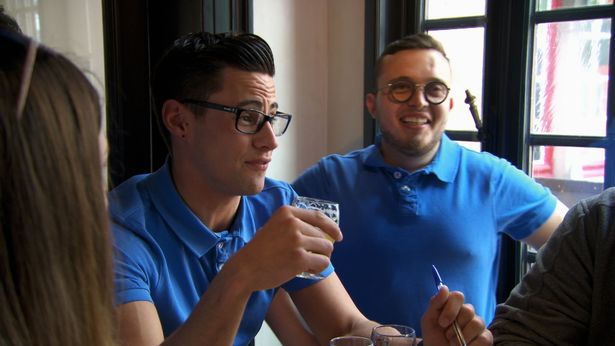 As I fairly enjoyed the calamities of “Bruges Tour” it is only fair to try and whisker down to one candidate of the week. I’m thinking James. He was part of the negotiations to get a percentage of the profits in the chocolate shop. James did take the risk with the merchandise which ultimately was the reason for team Graphene’s win and Elizabeth to smugly think she has actually achieved something.

Did you enjoy the boardroom?

Lord Sugar has clearly stepped up his boardroom game because he needed to spice up the show. Sarah Jayne Clark has felt zero pressure since finding herself in this process. That was ultimately her downfall as Lord Sugar gave her the “you’re fired”. But why not Charles? What on earth has he done to deserve a chance? To make matters worse he sent Charles back to the house before Andrew.

This was the best boardroom so far this series. Sugar changed his style and gave Andrew a dressing down before allowing him to return to the house. Is Andrew the dark horse? I am only joking. No one is.

Is The Apprentice really falling behind?

Yes. If anything episode six was trying to prove to itself that there is still a sliver of life yet. Lord Sugar even reminded the candidates that this is a business process. I chuckled when he said that. He still believes in this show. Sugar also took into account performances from previous weeks before making his decision on who to fire. What performances could he possibly pinpoint in order for him to make a choice?

Week six made you believe the embers were turning into flames. The fact is, if the love for the show is still there, you will continue watching until the fire goes out. I would abandon ship if you feel nothing at all.