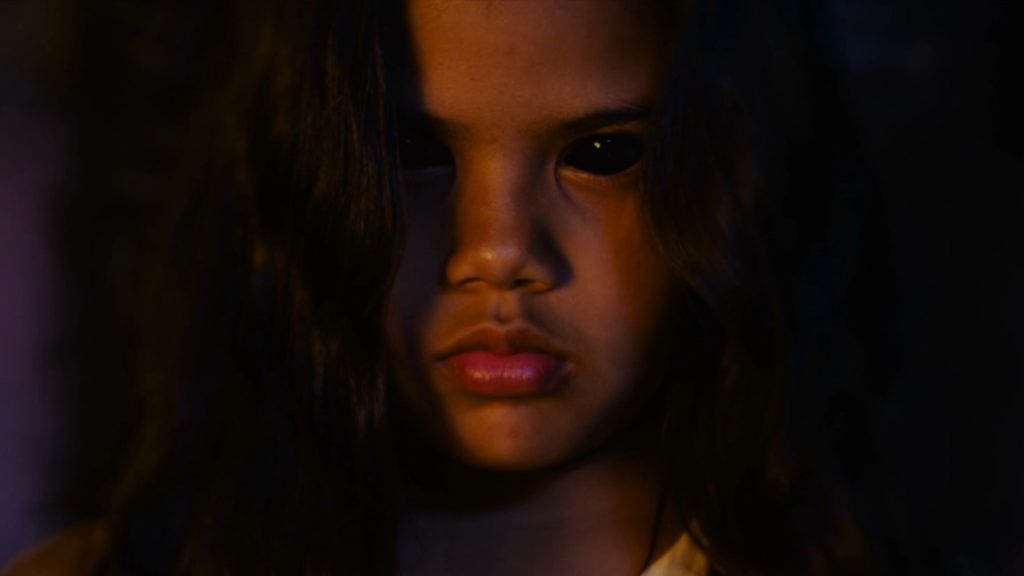 Devil’s Whisper is as much a horror film as it is an advertisement for the demon-vanquishing power of Catholicism. Most possession movies have a religious component, of course. It comes with the territory. But Devil’s Whisper, which involves a devout Latino family battling an ages-old evil spirit. Feels very much like a sales pitch. Sign up, it seems to say, and you’ll be shielded from the horrors of generic filmmaking. Ten “Hail Mary’s”, five “Our Father’s”, one mediocre movie.

Alex (Luca Oriel) is a teenager who aspires to the priesthood. He lives with his mother, Lucia (Tessie Santiago), his father, Marcos (Marcos A. Ferraez), and his precocious younger sister, Alicia (Alison Fernandez). The family is heavily involved with the local church. Headed by Father Cutler (Rick Ravanello), where Alex regularly confesses his sins. Including “unclean” thoughts about his friend, Lia (Jasper Polish) – in a stylishly-lit booth.

The demon is a cheap-looking blend of Slenderman and one of the aliens from M. Night Shyamalan’s Signs. Alex finds it in a sealed box hidden within his recently-deceased grandmother’s antique armoire. It continues to leer at him from the shadows for the rest of the movie. Nothing about this is scary, but such things rarely are.

I must say, though, that I liked Devil’s Whisper a little bit. It’s well acted and has a central family dynamic that is believable and compelling. Which is half the battle, really. Alex – who develops bags under his eyes and gets increasingly irritable as the story progresses – has a breakdown in the back seat of his parents’ car. It’s one of the finest examples of acting I’ve seen from a youngster in a while. I could have done without a lot of the God-bothering subtext and sloppy allusions to childhood abuse. But I’d like to see some more of this kid – maybe in a better movie. 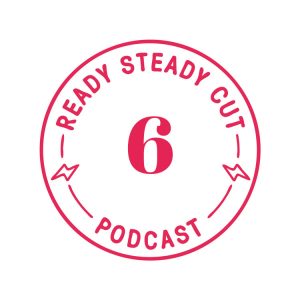 Blade of the Immortal, directed by Takeshi Miike 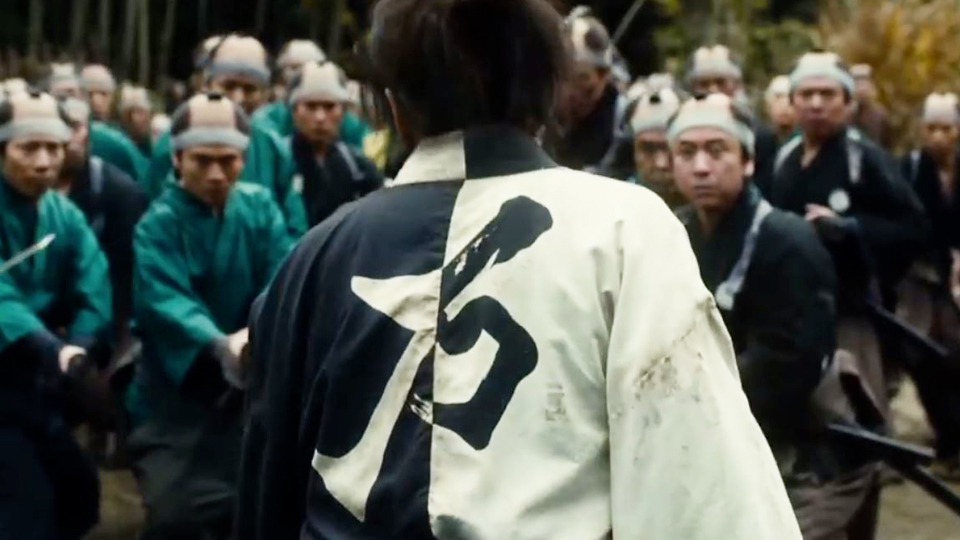 Blade of the Immortal is Takeshi Miike’s 100th credit as a director. Count ‘em. 100 film, video and television projects across 26 years and countless genres. This film, which is adapted from the first arc of the manga by Hiroaki Samura, follows an immortal samurai named Manji (Takuya Kimura). Who is hired by a little girl, Rin (Hana Sugisaki), to hunt down the men who killed her father.

Manji is immortal thanks to a hooded crone who has cursed him with “blood worms”. These are mysterious parasites that knit his wounds back together and prevent him from dying. What’s compelling about the character is that he’d like to. He’s haunted by the death of his mentally-handicapped little sister, which is another kind of curse. Kimura sells this by always acting as though he’s just woken up and is fed up at the prospect of having to fight people again. His existential angst bleeds into the choreography. His fighting style is often kind of lazy and non-specific because, you know, why would he bother being careful?

There’s no justifiable reason for Blade of the Immortal to be two and a half hours long. But if you’re going to see one outlandish samurai film this year, make sure it’s this one. The pleasure is in the details. The cult-like gang of roaming weapon masters whom Manji is hunting are all colourful, unique opponents for him to engage with his strange and elaborate collection of swords. Which he’s always carrying despite seemingly having nowhere to put them.

This might lack the radical changes in tone and the visual flourish of some of Miike’s other work, and it’s inferior to 13 Assassins, but the face of Japanese underground filmmaking didn’t get his reputation for nothing. His mediocre work is better than some people’s best. There are enough small, weird details to reward those who pay attention to make Blade of the Immortal well worth the price of admission. 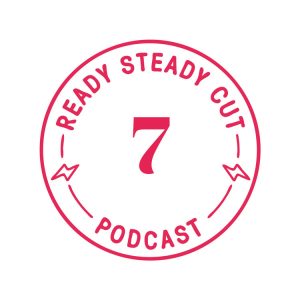 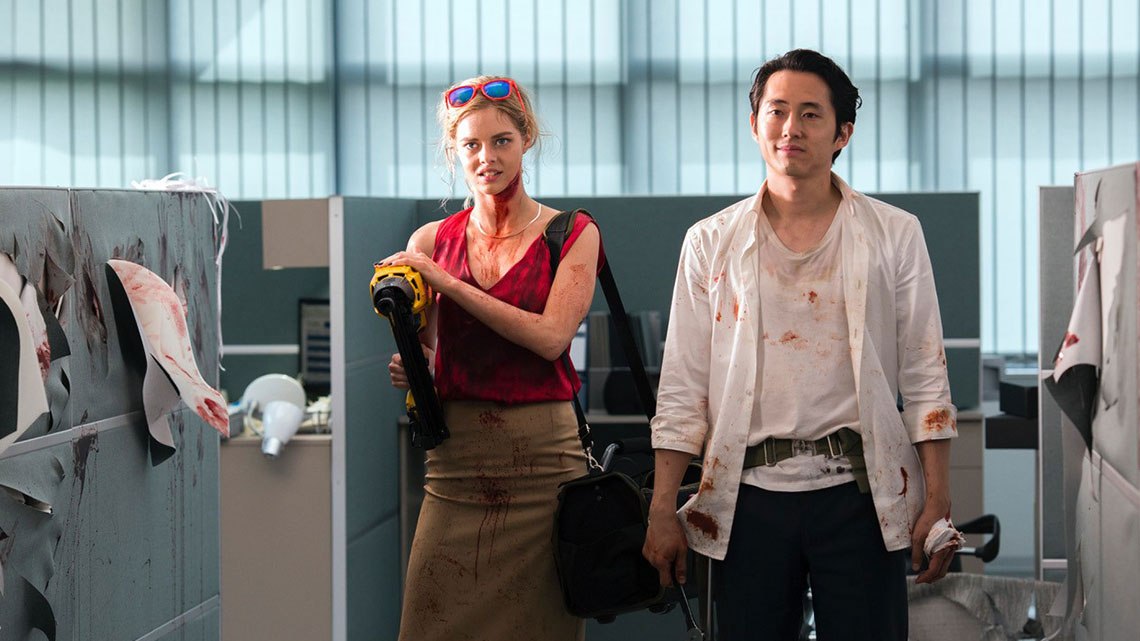 From one bloodbath to another. This one is brought to us by Joe Lynch, who directed Wrong Turn 2, aka The Only Good One, and 2014’s Everly, which I loved and nobody else watched. It arrives at a time when anger and frustration are very much in vogue. Which makes it a surprisingly topical bloodbath that is also stylish, smart and propulsive.

The narrative hook from which all this carnage swings is an airborne disease known as “Red Eye”. Sufferers do get one bloodshot eye, but they lose all their moral and societal sense. What’s clever about the film is that the illness doesn’t turn people into zombies or raving lunatics. It just makes them stop giving a s**t.

Our heroes are a soon-to-be-fired legal shark (Steven Yeun) and a client contesting an immoral foreclosure (Samara Weaving). They find themselves trapped in the offices of the loathsome firm that established the legal precedent for absolving the infected of their crimes (ironic!). And because they’re infected, they have no compunction about picking up nail guns and hammers and fighting their way to the CEO (Steven Brand) and executives (Caroline Chikezie; Kerry Fox; Dallas Roberts) that have harassed and exploited them.

Mayhem is relentless, captivating, funny, and a little scary, sometimes. It’s also undeniably well-directed and kept engaging by two phenomenal leading performances from Yeun and Weaving. It might not be quite as clever as it thinks it is, but it manages to channel national anger into a vision of corporate America that most of us could get used to.

This biopic doesn’t try to chronicle Marshall’s entire life and career. It instead hones in on a case in 1941. During which Marshall, along with a white, Jewish lawyer, Sam Friedman (Josh Gad), defended a black chauffeur and butler who had been accused of raping his wealthy, white employer. The modest scope allows for a focus on a kind of legal-eagle bromance between the two leads that can sometimes be distracting. This is very much Marshall’s movie, but his blossoming relationship with Sam can sometimes overwhelm the recreation of the case. Gad is an excellent comedic foil, but sometimes to the detriment of the film around him.

Still, this is an examination of individual and systemic prejudice that is surprisingly full of humour and warmth. It never becomes glib or superficial, even though it threatens to. Moments like Marshall openly drinking from a “White’s Only” fountain seem brazen and powerful. Not because it’s a momentous act of rebellion, but because most movies concerned with race and racism wouldn’t spare the time to include it. 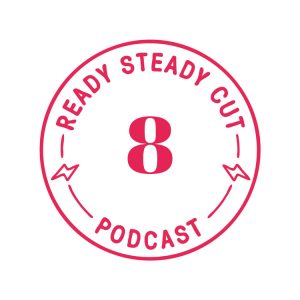 The Snowman, directed by Tomas Alfredson 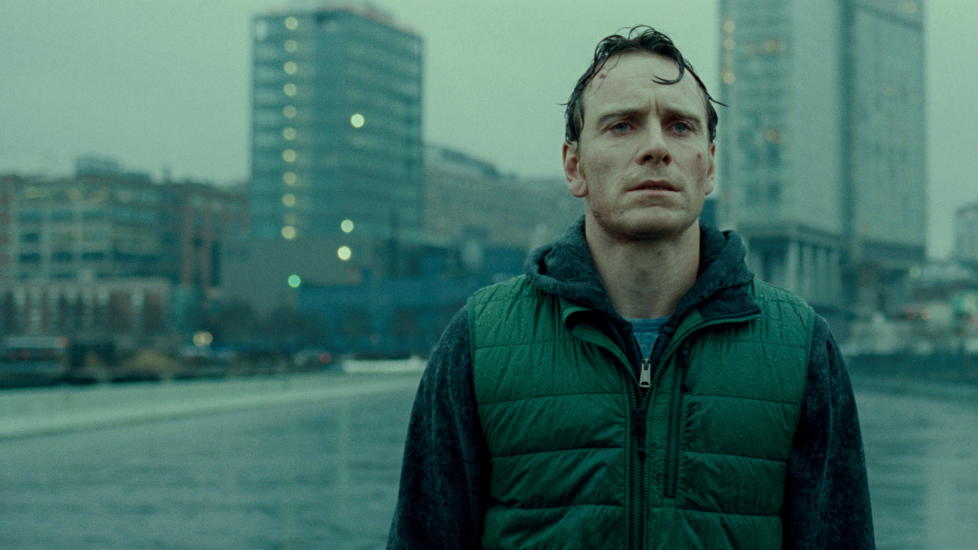 When it comes to The Snowman, you wonder why any part of this bafflingly terrible film was included at all. In it, Michael Fassbender plays Harry Hole, an alcoholic detective and the hero of a series of grim novels by Norwegian author Jo Nesbo. He’s on the trail of a serial killer who targets women and leaves behind arranged body parts and a childlike snowman with coffee bean eyes and twig arms. If there has ever been a film which features more shots of glum characters gawping through windows, I certainly hope I never see it.

How did so many stars stumble their way into this grisly simulacrum of Oslo? Rebecca Ferguson plays Harry’s new partner; Charlotte Gainsbourg his ex. There are parts for Val Kilmer, Toby Jones, Chloe Sevigny and J.K. Simmons. What are they doing here? Nesbo, who is perhaps the best of a generally overrated crop of Scandinavian genre writers, tells stories that have politics, themes and worldviews. This film’s head is as blank and expressionless as its blinding white snowdrifts, its noirish nightscapes, and, indeed, it’s star.

I’ve never seen a film in which so many scenes begin too late and end too early. There isn’t a whiff of any creative cohesion, or a directorial hand that might steer such an odd assemblage of characters, detours, and developments along the byzantine trail that the murderer cleaves through countless acres of slush. The Snowman is truly abominable. 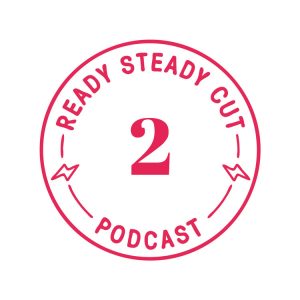 Enjoyed reading this reviews roundup? Then you will probably like listening to us too, so check out our podcast below.