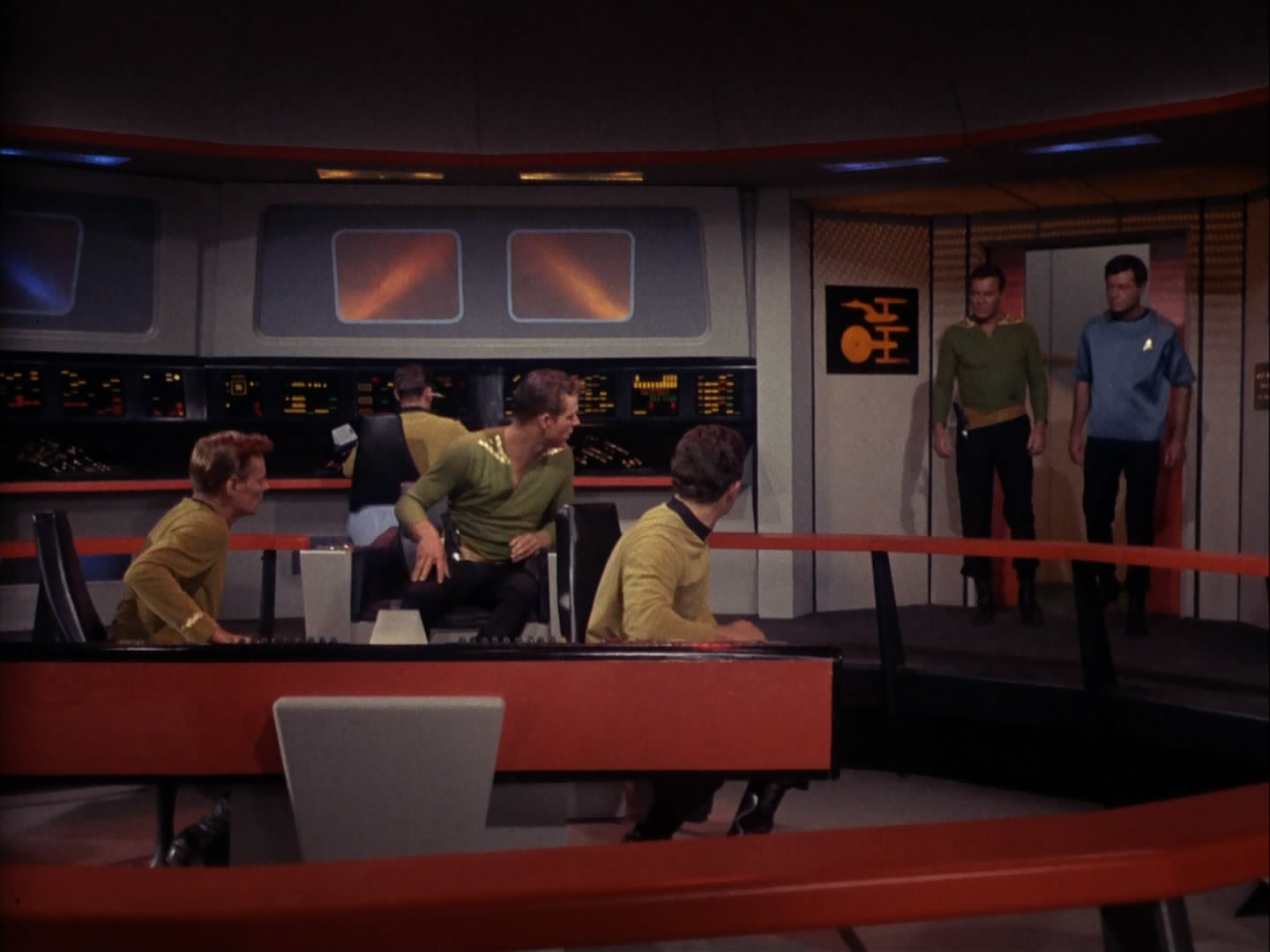 A transporter accident accidentally splits Kirk into two personalities; one is aggressive and the other passive. Spock must find a way to fuse his captain back together and repair the transporter before harsh conditions on the planet’s surface kill an entire away team.

Much like “Charlie X” and “Where No Man Has Gone Before” both explored two sides of the god-like human trope, so does this dig into inhibitions and detailed a character study – this time of Captain James T. Kirk.

Kirk’s two halves are aggressive and passive, one the unfettered id and the other the superego neutered without the ego or the id to balance it out. Id-Kirk struts lecherously throughout the corridors, barging into the Sickbay and demanding brandy, then sneaking into Yeoman Rand’s quarters. This sneaking into her quarters is impressively disturbing:

Then, id-Kirk kisses her roughly, forcing himself on her. Luckily, she fights him off temporarily and gets word to Crewman Fisher, who calls for help before Id Kirk incapacitates him. This is just about as dark as TOS gets. What’s worse, even though superego-Kirk isn’t her actual attacker, Rand is forced to confront the man who looks exactly like him, to go through an interrogation in front of him. She’s willing to go along with a lot, to bypass a significant amount, going so far as to say, “If it hadn’t been…I can understand, I don’t want to get you into trouble. I wouldn’t have even mentioned it!” This speaks volumes about the culture at the time. We’re left to assume what those ellipses omit: “If it hadn’t been for the fact that you actually attacked me, I’d have kept my mouth shut. I can understand, I don’t want to get you into trouble. Wouldn’t have even mentioned it.” Once again, this is not the utopia that Star Trek: The Next Generation imagines – Roddenberry’s vision is clearly in its infancy here. In no way would a member of Picard’s crew have offered to cover up sexual harassment.

All this is telling about the 1960s Hollywood culture; furthermore, that things haven’t changed much, particularly in light of the Weinstein and other celebrities’ harassment fallout of late. Crewman Fisher stands out as the hero of this episode, taking a beating in Yeoman Rand’s defense and never backing down, even in the face of his Captain. Luckily, Spock is unswervingly loyal and impeccable logical: his only deduction is that there’s an imposter. 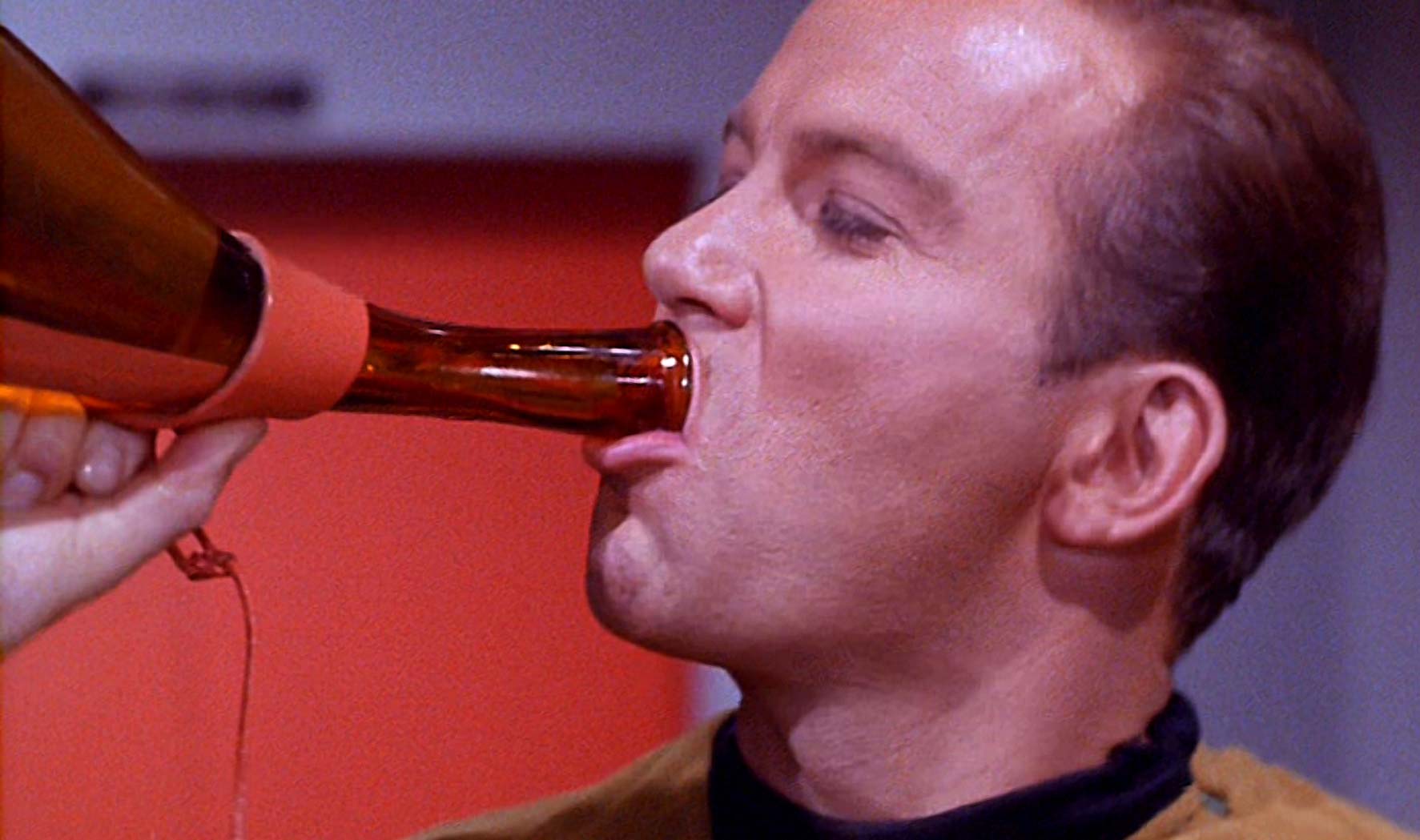 With all this horrid behavior, “The Enemy Within” says something important about human nature – not really a message, exactly, but an important observation:

SPOCK: Judging from my observations, Captain, you’re rapidly losing the power of decision.
MCCOY: You have a point, Spock?
SPOCK: Yes, always, Doctor. We have here an unusual opportunity to appraise the human mind, or to examine, in Earth terms, the roles of good and evil in a man. His negative side, which you call hostility, lust, violence, and his positive side, which Earth people express as compassion, love, tenderness…and what is it that makes one man an exceptional leader? We see indications that it’s his negative side which makes him strong, that his evil side, if you will, properly controlled and disciplined, is vital to his strength. Your negative side removed from you, the power of command begins to elude you.

It is vital to understanding who we are as humans to realize our true natures: we are deeply flawed and, despite all of our civilization, we still need some of this more primal nature.

MCCOY: Jim, you’re no different than anyone else. We all have our darker side. We need it! It’s half of what we are. It’s not really ugly, it’s human.

MCCOY: Yes, human. A lot of what he is makes you the man you are. God forbid I should have to agree with Spock, but he was right. Without the negative side, you wouldn’t be the Captain. You couldn’t be, and you know it. Your strength of command lies mostly in him.

KIRK: What do I have?

MCCOY: You have the goodness.

KIRK: Not enough. I have a ship to command.

MCCOY: The intelligence, the logic. It appears your half has most of that, and perhaps that’s where man’s essential courage comes from. For you see, he was afraid and you weren’t.

Moreover, it’s important to notice that both Spock and McCoy – themselves the logos and pathos, respectively, in the Kirk-Spock-McCoy triumvirate – help superego-Kirk sort out this existential crisis. Despite the need for those primal traits within us, it is ultimately the superego-Kirk that wins out over the passionate id-Kirk.

This is a rougher episode, as far as the acting goes. Look, I’m a huge Shatner fan. Huge. I will forgive just about any of his acting foibles because he’s been thrown so far under the bus that it’s nearly criminal. But this episode is the source of most of that criticism. I see it. I get it. But this episode sort of calls for it. I don’t think Shatner is far off-base for hamming it up so much. That man is letting it all hang out, which is hard to watch! 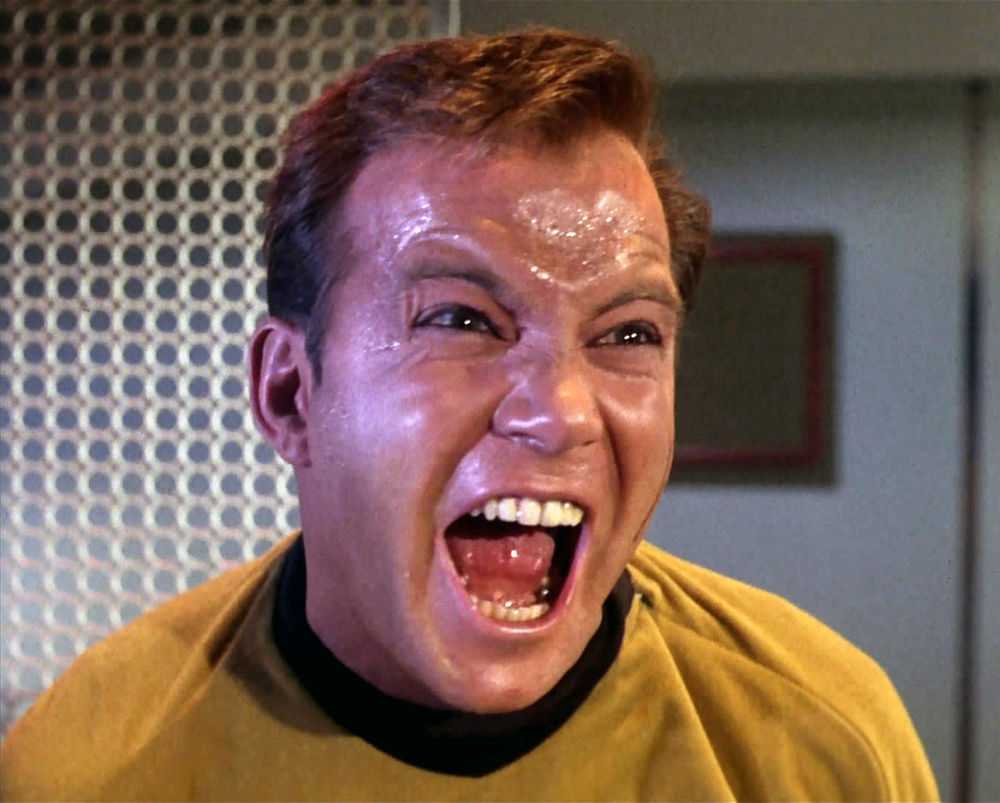 Random Thoughts on The Enemy Within

Richard freaking Matheson wrote this episode? He’s the author of I Am Legend, one of the most important post-apocalyptic novellas ever written. Some of the best science fiction writers of the time (strike that, some of the best writers, period, of the time) contributed to Star Trek.

When Kirk (either Kirk) beams aboard, he doesn’t have a Starfleet insignia on his shirt. In the next scene, both Kirks do have the insignia.

Id-Kirk is wearing a lot of eyeliner and sweating profusely.

This episode’s plot is hampered by the lack of a shuttle. Ironically, Roddenberry conceived of the transporter to save money, so that they wouldn’t need to build and film a shuttle to get the crew down to whatever planet each week. However, Sulu and his team are about to die on the planet because of the transporter malfunction, when as later episodes show (and as continuity reinforces) a shuttle would have solved that particular problem handily. 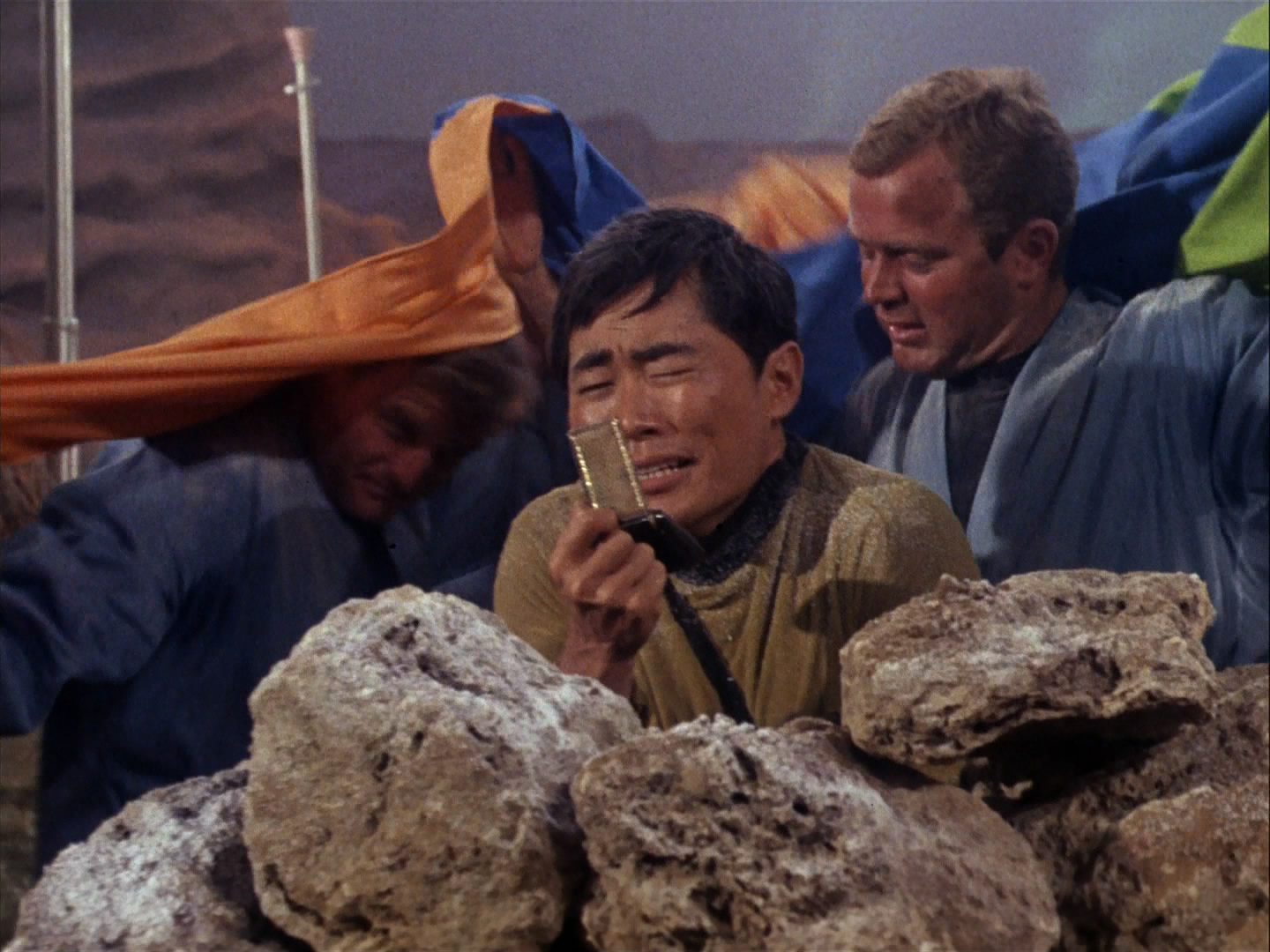 SPOCK: Captain, no disrespect intended, but you must surely realise you can’t announce the full truth to the crew. You’re the Captain of this ship. You haven’t the right to be vulnerable in the eyes of the crew. You can’t afford the luxury of being anything less than perfect. If you do, they lose faith, and you lose command.

KIRK: Yes, I do know that, Mister Spock. What I don’t know is why I forgot that just now. Mister Spock, if you see me slipping again, your orders, your orders are to tell me.

– Kirk and Spock are incredibly close here, and their friendship is exactly what saves Kirk from being shot on sight for being a violent attacker. He admits his frailties, and Spock is ready to support his friend.

KIRK: I’ve seen a part of myself no man should ever see. – Despite our need for those drives and urges, that doesn’t mean we love them.
SPOCK: The, er, impostor had some interesting qualities, wouldn’t you say, Yeoman?

– This is maybe the most problematic line in Star Trek: The Original Series, next to what the random Starfleet officer says about Orion Slave girls in “The Cage.” Here, Spock is rather disgustingly implying to Yeoman Rand that, after suffering a sexual assault at the hands of a man who looked like Captain Kirk (and indeed was him, mostly), she must be attracted to that part of him – almost suggesting she wanted it or would have liked it. Wow.

Yes, though I’m dropping some significant caveats here – there are some important things being said about human nature, about what makes us who we are. However, the handling of a sexual assault of one of the lowest-ranked members of the crew by her captain (even though, yes, it was his unrestrained id that did it, not the whole man himself) just doesn’t work.

They almost could get away with this, if not for Spock’s remark in the closing moments of the episode.