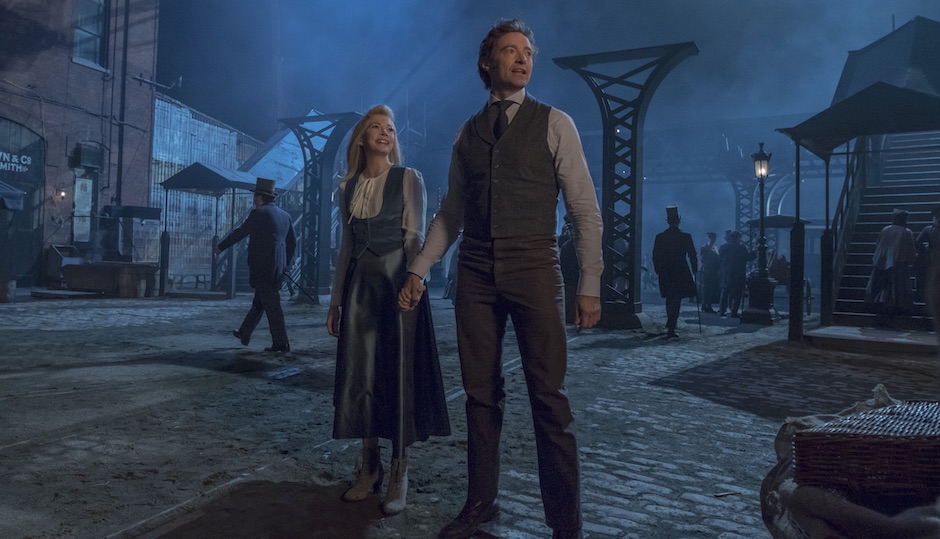 Somewhat fittingly given the subject, The Greatest Showman is a bit of a con. Masquerading as a glittery stroll through the life of Phineas Taylor Barnum (Hugh Jackman), this paper-thin musical isn’t really about P.T. Barnum, or, for that matter, anyone else. Instead, it’s a glammed-up Trojan horse full of appallingly catchy pop songs. All its messages about uniqueness and staying true to oneself are empty bluster. It’s an old-fashioned celebration of the birth of showbusiness that’s slavish devotion to bland homogeneity makes it feel slight and forgettable.

Still, though. The soundtrack’s banging.

P.T. Barnum didn’t coin the phrase he’s most associated with – “There’s a sucker born every minute” – but he might as well have done. We meet the notorious huckster at the height of his circus fame, but quickly wind back to his tough upbringing on the streets. A near-penniless dreamer, he nonetheless manages to sneak his way into the heart of Charity (Michelle Williams), a wealthy socialite. In the hopes of giving them both a better life, he finagles a bank loan and opens a wax museum. When that venture looks like it might be going under, he begins to add “unique individuals” to his menagerie. Among them are a bearded lady (Keala Settle), General Tom Thumb (Sam Humphrey), and a black trapeze artist, Anne Wheeler (Zendaya), who is tellingly considered the greatest “freak” of them all.

Barnum’s “collection” earns him notoriety, but not the kind he’d like. He’s still on the fringes of high-society. People still protest him in the streets. To help he charms an open-minded toff, Phillip Carlyle (Zac Efron), whose various connections allow Barnum to meet the Swedish opera singer Jenny Lind (Rebecca Ferguson), whose Stateside tour he gambles everything on promoting, and whose shapely legs he risks his marriage to get in the middle of. 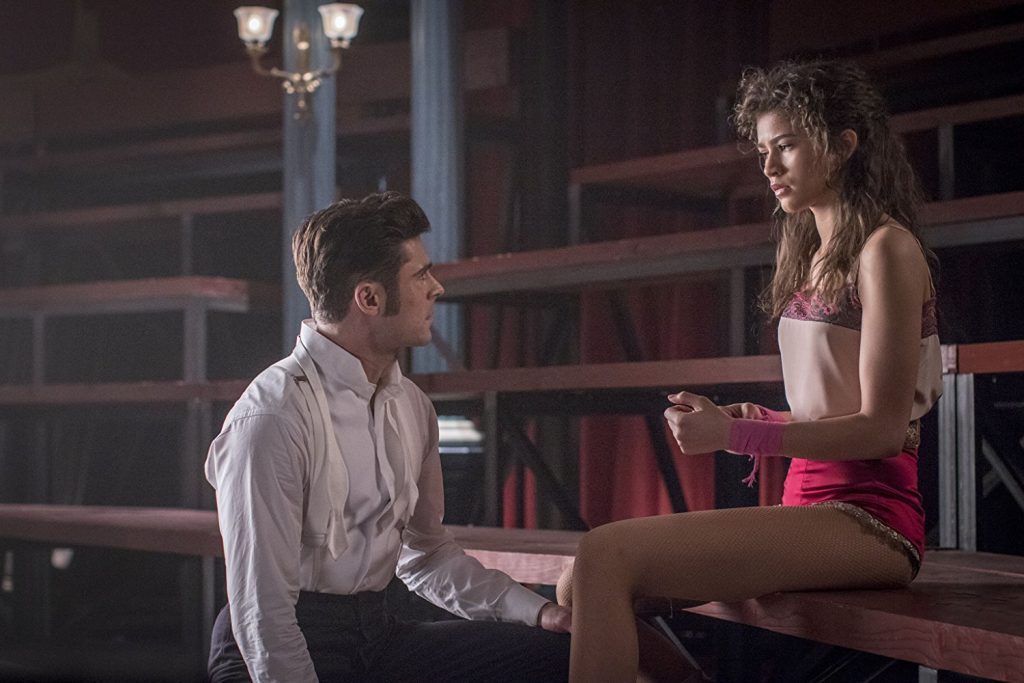 True, but director Michael Gracey speeds through it all so there’s more time to lavish on the big-production numbers, which makes it difficult to care. It actually took me quite some time to figure out the relationship between Barnum and Lind; I thought they were just being polite to one another. Then again I was beset by crippling earache after the first act and at one point had to take a break to have a little cry. That isn’t a comment on the quality of the songs, by the way. I’m simply saying that for some reason half of my head stopped functioning normally.

The songs indeed. What’s a shame is that most of them are mired in excessive CGI, which means that the performances are largely stitched together out of impossible camera angles, trapeze wires that don’t obey the laws of physics, and some hilariously fake-looking animal shenanigans. But the songs themselves are belting. If there’s any film soundtrack that’s going to do gangbusters on Spotify this month, it’s this one. And I say that as someone who could barely enjoy it because my right ear canal felt like it was being violated by a man wearing a condom made of sandpaper.

Not the film’s fault, no. I was very ill. Besides, the ten or eleven songs were composed by Benj Pasek and Justin Paul, who have won Oscars and Tonys. They did the numbers for La La Land and for the current Broadway hit Dear Evan Hansen. Of course they’re good. And it’s just as well, really, because the rest of it really is a bit bland. It’s written in the spirit of family fun by Jenny Bicks and Bill Condon, so leaves all of the darker bits of P.T. Barnum’s life unexplored. I don’t mind that. But as a celebration of diversity and embracing all kinds, it’s a bit weak and aimless. If you need the razzmatazz of a Hollywood musical to tell you that you shouldn’t judge someone based on their size, their skin colour or their facial hair, then whether or not the songs are any good is probably the least of your problems. 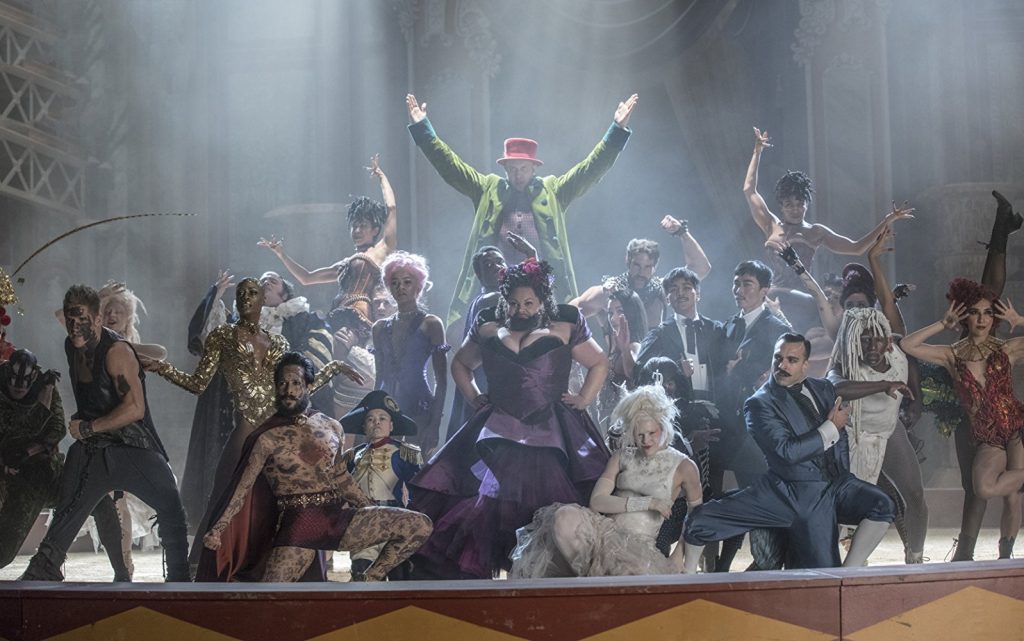 How’re the performances in The Greatest Showman?

Hugh Jackman is perfectly cast, and when he dons the impresario’s coat and top hat, you can tell by the smile on his face that he was properly sick of playing Wolverine. His devotion to the material leads you through the entire film, not just the big top’s centre ring. I’m glad he was there. A character like Barnum, who isn’t particularly likeable, needed a charismatic, game actor. Especially because sometimes he stops speaking and starts to sing instead; a trope I’ve never quite gotten used to.

Elsewhere, Zac Efron is right at home in a big, splashy musical. He, of course, made his name by singing and dancing in High School Musical, but since then he’s found some real old-school movie star charisma and a surprisingly ironic sense of humour. He’s better here than he was there. Also excellent is Keala Settle as the buxom bearded lady, who taps into the project’s spirit better than anyone, and Rebecca Ferguson, who is lip-synching but still manages to smoulder enough that you can totally understand why a man like Barnum – and, let’s face it, any man – might risk it all for her. It’s a shame Michelle Williams was given a part but nothing to act. Then again, most of her scenes occurred while I was trying not to be sick in my lap due to the excruciating pain in my ear, so I probably wouldn’t have paid much attention to her anyway.

It’s far from the greatest show on earth. But Jackson and the entire cast are deeply committed to entertaining. They treat the material with so much sincerity that it’s hard to mind how clichéd and generic it all is. Some brazen optimism is fine now and again, especially in our current climate. But you’ll get everything The Greatest Showman has to offer from the soundtrack. And you won’t have to do what I did, which was to jog from the screening to the cinema toilets and make a funny noise in the cubicle to make sure I hadn’t gone deaf.

4 thoughts on “Review | The Greatest Showman”