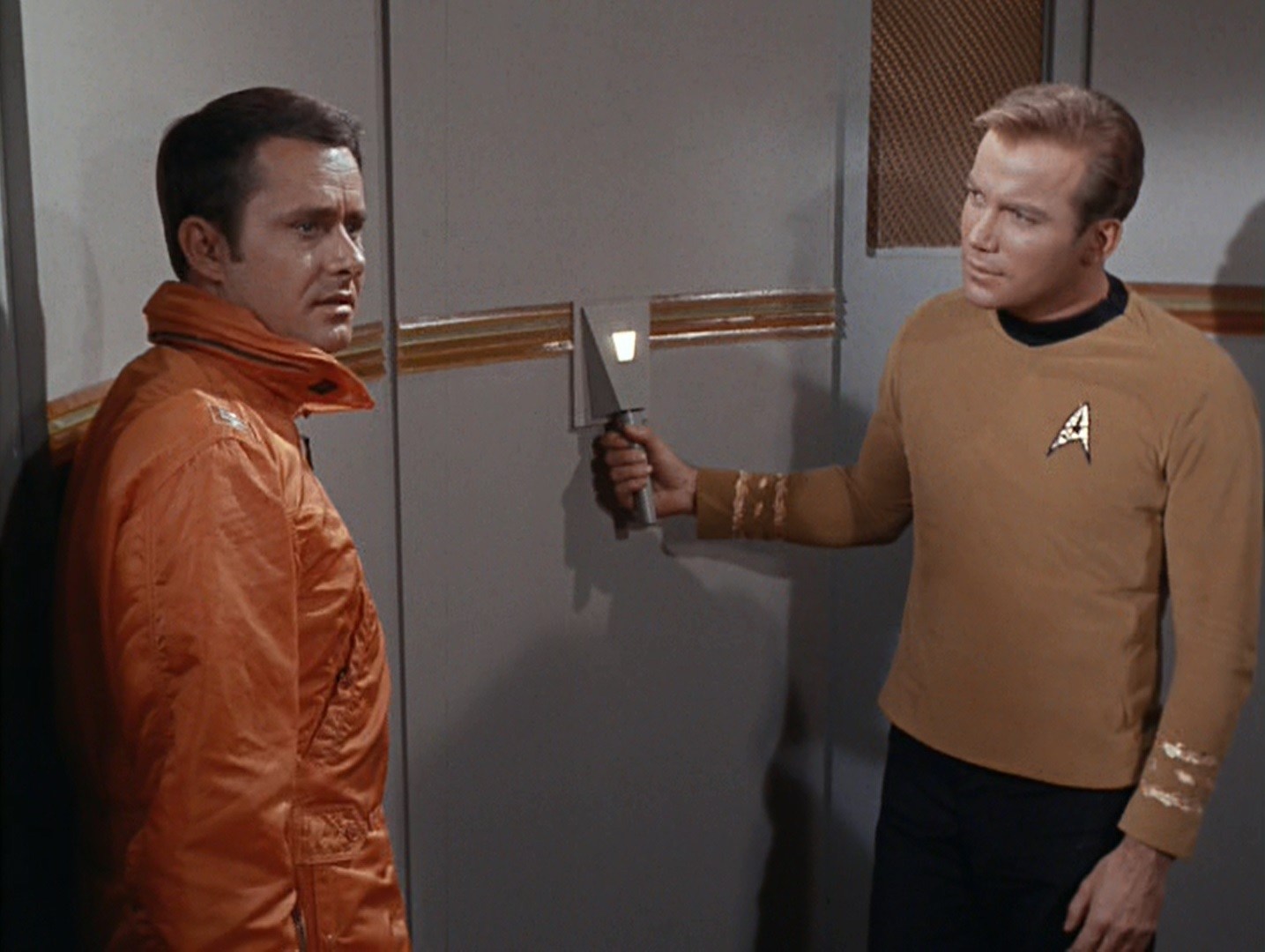 The Enterprise accidentally winds up in 20th Century Earth – 1969 to be exact – and they’re approached by a fighter jet who reports them as a UFO. They accidentally destroy the fighter, transporting the pilot, Captain John Christopher (Roger Perry) aboard. Captain Kirk and his crew must find a way to erase all signs of their presence in that time period, return Christopher to his proper place in time (because he plays a pivotal role in the development of space exploration), and return back to the 23rd century. 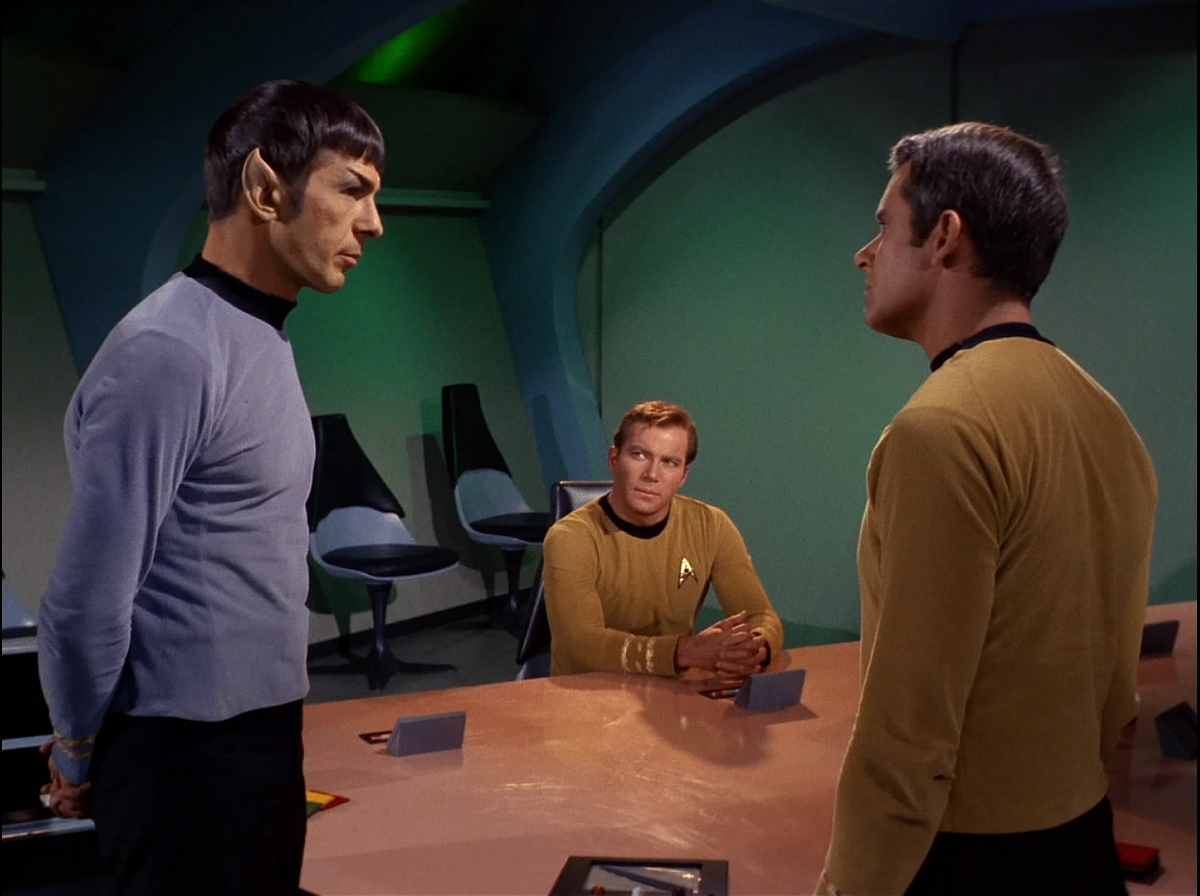 Compared to the deep profundity of many previous episodes, this doesn’t follow. We don’t have deep philosophical struggles with prejudice and Otherness here. However, we see the Enterprise crew dealing with the consequences of their actions – even inadvertent ones. They don’t intend to be there, and they don’t mean to destroy the approaching fighter jet, but they do so, and they need to clean up their mess. Yet there’s a bit of a problem. Spock points out:

“We cannot return him to Earth, Captain. He already knows too much about us and is learning more. I do not specifically refer to Captain Christopher, but suppose an unscrupulous man were to gain certain knowledge of man’s future? Such a man could manipulate key industries, stocks, and even nations. And in so doing, change what must be. And if it is changed, Captain, you and I and all that we know might not even exist.”

This is the first of many, many time travel episodes, which have become an essential staple of Star Trek episodes. They’re almost always among the best episodes of each series. Rarely do they intend to travel back in time. The crew doesn’t want to change history, but they’ll need to do whatever they can to protect their past and present. They need to eliminate any evidence of their presence, and they must return Christopher to Earth. This leads to a comedy of errors that really works well. They accidentally beam up an Air Force sergeant, leave Kirk to be interrogated by a Jack Webb impersonator, and still must set everything right by the end. 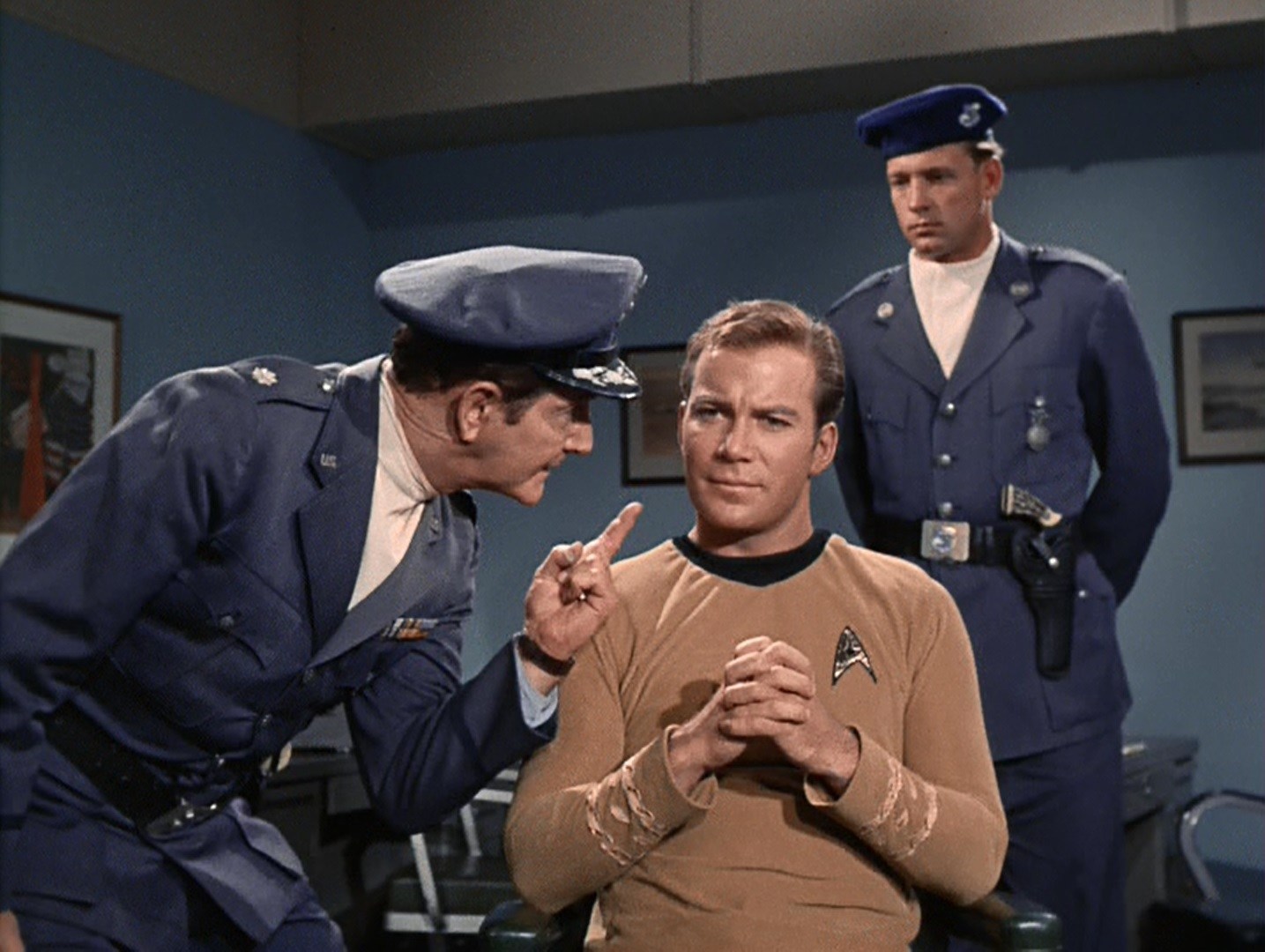 Captain Christopher is a perfect Watsonian audience surrogate. He’s no buffoon (though we get that in the form of Hal Lynch’s sergeant), and while he’s awed by the advanced technology of the Enterprise, he’s determined to do his duty and to return home to his family. His presence forces us to rethink what we already think about the Enterprise – we view it through contemporary eyes. What would we think if we were suddenly snatched up and given a tour of a UFO? 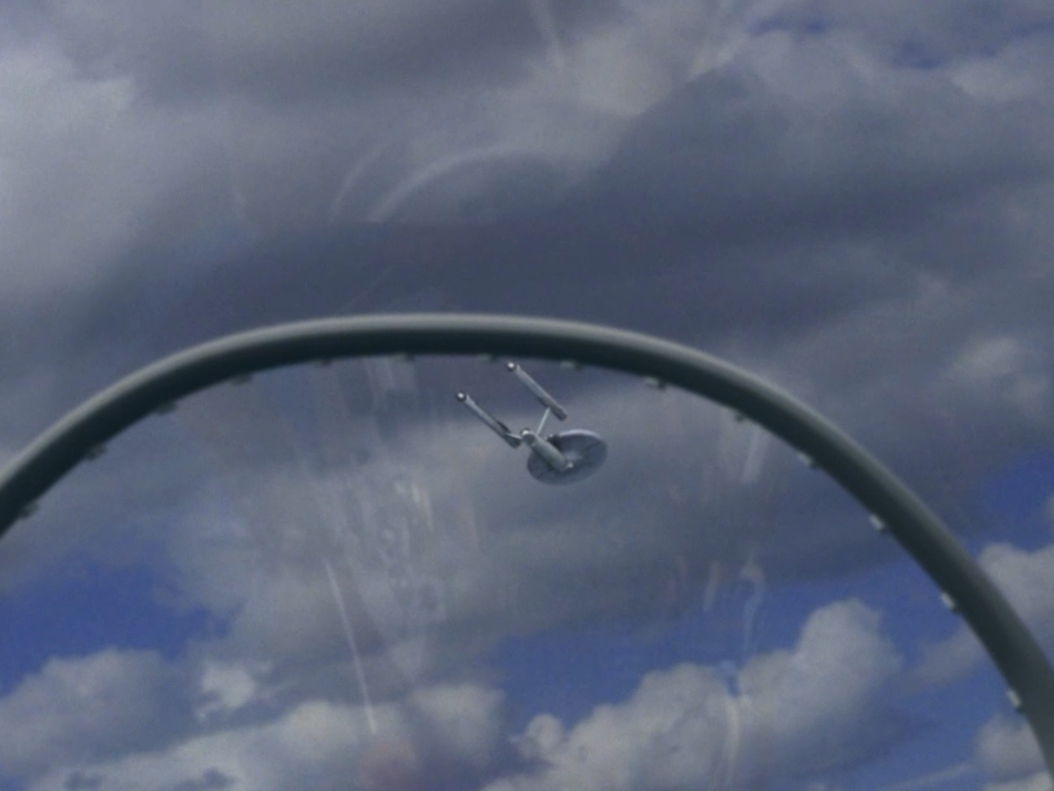 The opening shots of “Tomorrow is Yesterday” do their job to ground this episode in reality. While Star Trek tends to be rather soft science fiction, focusing on social issues rather than deeper, harder scientific elements, the simple act of opening the film with fighter jets scrambling in their base, tracking the Enterprise via radar, and then showing the ship in the clouds, tells the audience that this is a different episode. There will be no green reptiles here – instead, if you look up in the sky, the Enterprise might just be floating up there.

When Kirk refers to a “black star” with high gravitational pull, he’s really referring to a black hole, which wasn’t named as such or explored thoroughly in concept until later in 1967. Star Trek sometimes is right on the cusp of new science. And sometimes there’s just technobabble.

They haven’t really decided on the name “Starfleet” yet. Kirk says that his authority comes from the United Earth Space Probe Agency. I’m wondering if he just puts things in terms that Christopher will understand. And then Kirk introduces Spock to Christopher. So easing him into the 23rd century isn’t going to be too slow…

Memorable Quotes from Tomorrow is Yesterday

SPOCK: “I made an error in my computations.”
MCCOY: “Oh? This could be an historic occasion.” 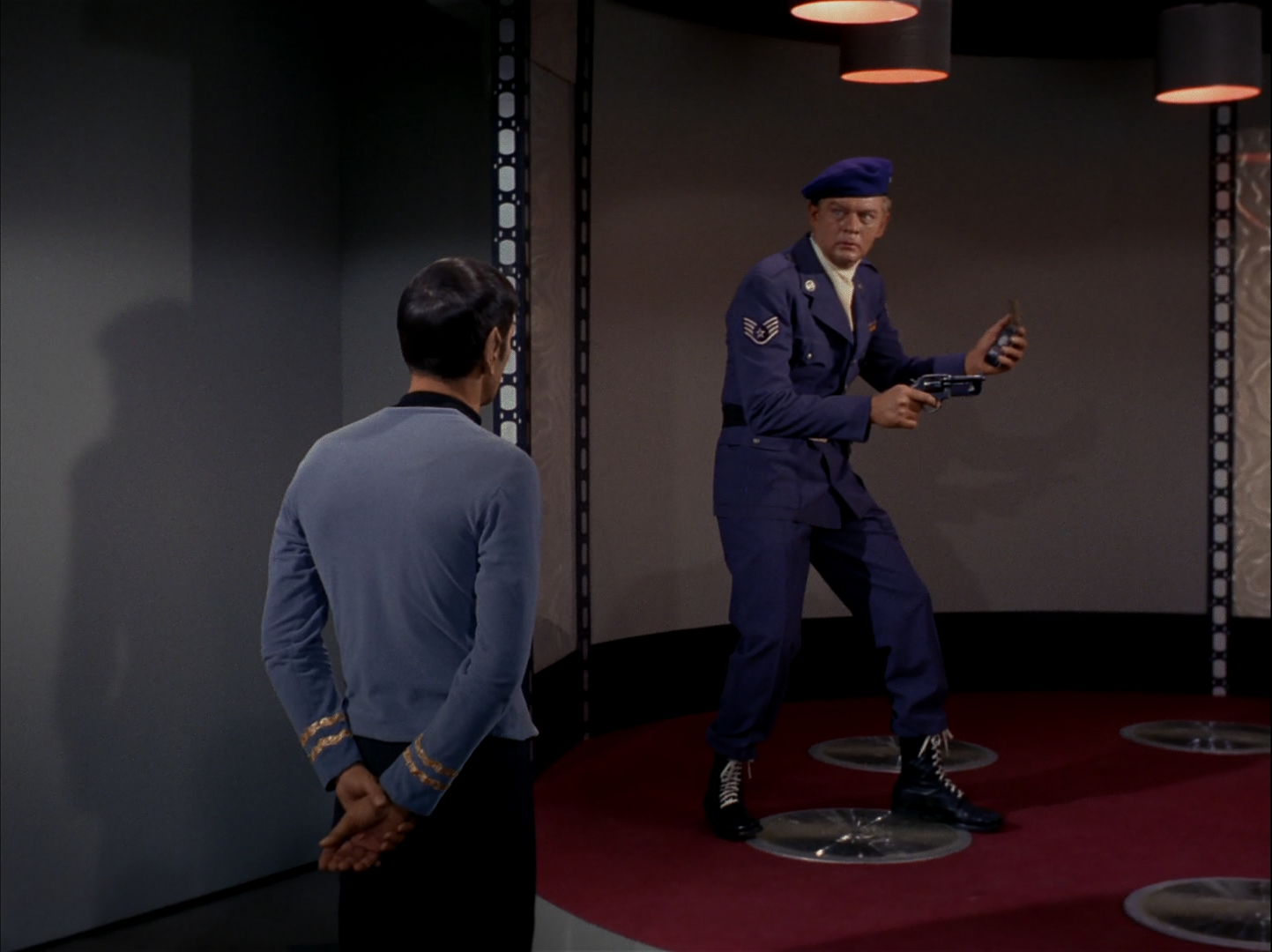 What I enjoy about this episode are its earnest attempts to think through and explain time travel. Star Trek didn’t phone it in often (at least until season three…), and here, despite the budget restraints, the episode spends time building up the stakes, then complicating them by requiring that Christopher is returned to Earth. It’s never quite so simple!