Recap | Star Trek: Discovery S1E14 – “The War Without, The War Within” 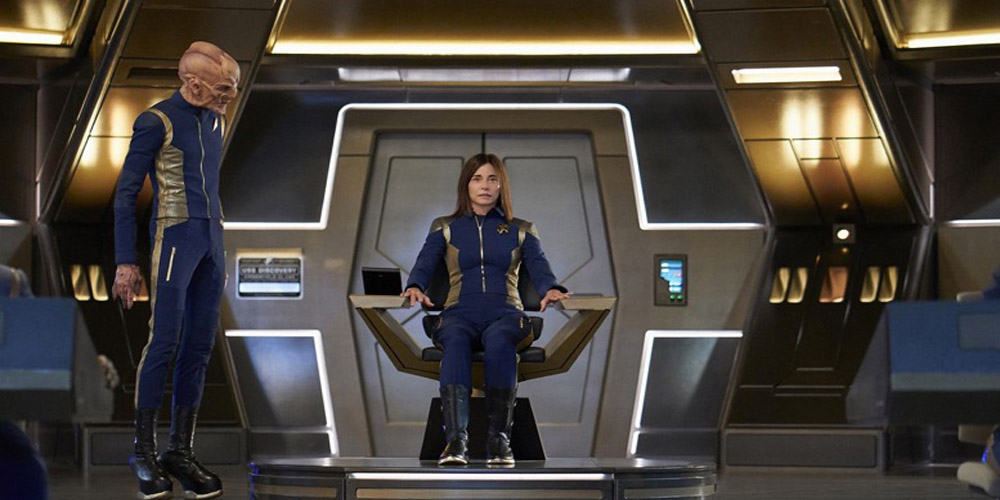 In last week’s episode, Gabriel Lorca met a face-meltingly grisly end. His rebellion against the Terran Empire was quashed. The USS Discovery made it back to the Prime Universe after T-boning the ISS Charon and having Stamets ride his mushroom buzz all the way home. When they got there, they learned that the Federation’s war against the Klingons wasn’t going terribly well.

What happened this week?

Sarek and Admiral Cornwell beamed aboard the Discovery for exposition duties. The competing Klingon houses are battling for supremacy by racing to destroy as many strategic Federation targets as possible. The situation’s desperate, and requires a bold plan. I say “bold”. Maybe “contrived” would be a better word, but who am I to judge? 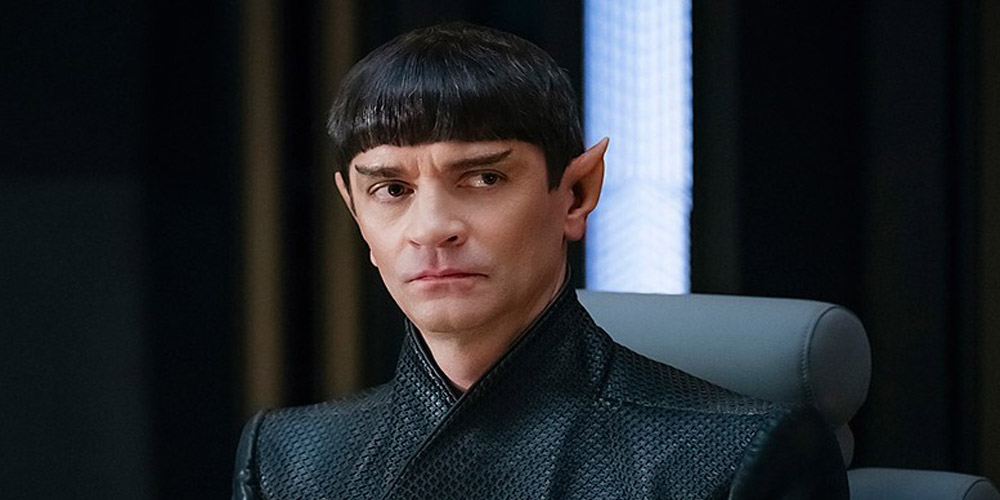 And the plan is?

Oh, yeah, the plan. So, Michael turns to Georgiou, who decimated the Klingons in the Mirror Universe. She suggests taking the fight to their home world, Qo’noS. Which is a reasonable idea. But Qo’noS is comprised entirely of cave networks within dormant volcanoes, so to bomb it, they first need to map it. And to map it they need to warp there and have Stamets navigate the caverns on another acid trip. But to warp there they need mycelium spores, of which there’s only one left. The solution to that problem is, apparently, to grow a whole bunch on some random moon. I mean… yeah, if you like.

Are we still irritated with this show?

Less so than last week, it must be said. Yes, some of this felt ridiculous, and a couple of moments were so stupid that they made me physically wince. (We’ll get to those momentarily.) But overall, despite “The War Without, The War Within” clearly being a filler episode designed to set things up for the season’s endgame, it mostly worked. This show always does when you’re willing to shut your brain down for half an hour and just roll with the punches, but still. It was an episode that managed to recapture some of what made the best one’s in this season really great: a loopy, boldly optimistic plan, and the entire crew working towards a single, common goal.

Let’s check in with the rest of the crew…

Let’s. So, one of the premises that this episode expects you to take at face value is the idea that Tyler has somehow dispelled Voq’s identity (despite retaining his memories) and is being reintegrated into the crew. This is the first of two incredibly weird decisions that I grappled with this week. On the one hand, hey, it’s nice to see everyone remembering Tyler exists. His love for Burnham being the tether to his human identity is a nice, albeit predictable touch, and is in-keeping with what we’ve seen from the character before. His interaction with Stamets was the usual, “Look, I know you were possessed and it wasn’t really your fault, but I still don’t forgive you” shtick, but it, too, felt honest. And I’m pleased that the writers pulled their punches on Tyler’s reconciliation with Burnham, although… well, that scene deserves its own paragraph. 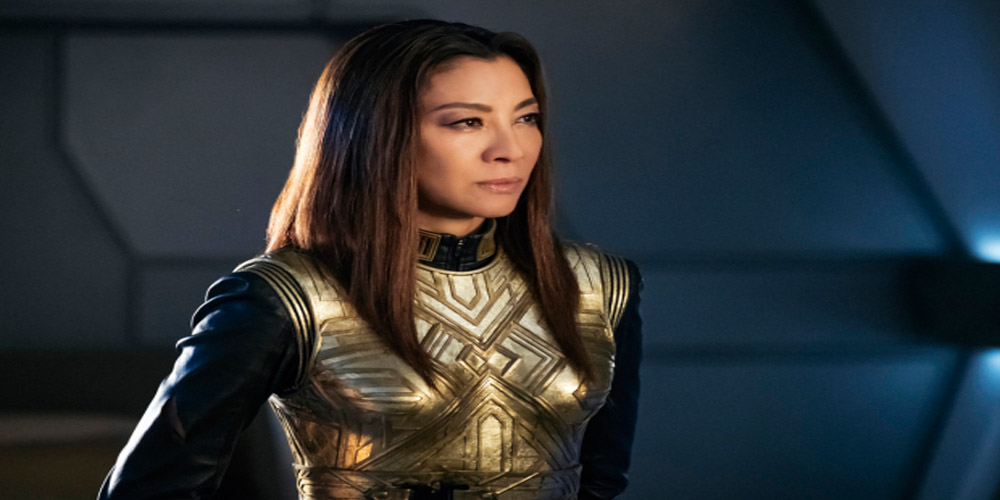 This is the dumbest s**t ever.

Thus far, the biggest problem with Star Trek: Discovery has been a clear sense that the big plot beats were planned in advance but the connecting tissue wasn’t. And that’s more or less fine when you’re talking about, say, going on holiday to the Mirror Universe for a few episodes. But the writers handling character relationships the same way feels like trying to have their cake and eat it. They want the shocking twists without sacrificing a major character. Which leads to absurd moments like the one this week, between Tyler and Burnham, when Tyler suggested that their problem is that Burnham can’t handle being in love with a Klingon. That’s the most melodramatic, idiotic s**t I’ve ever heard. It makes the whole arc feel forced. Their relationship is convenient to the plot, not true to the facts.

Oh, and giving Tyler free run of the ship, and having the Discovery’s crew warmly embrace him, is equally stupid.

At the end of the episode, after cultivating a lifetime’s supply of mycelium spores ready for the attack on Qo’noS, Admiral Cornwell revealed the next stage of the plan: to have Emperor Georgiou impersonate her Prime Universe self, assume the captain’s chair, and lead the attack. 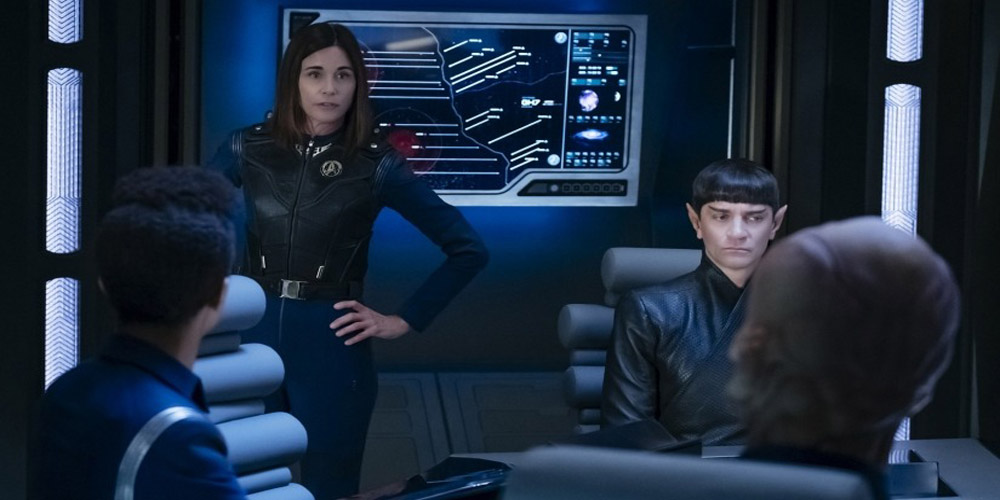 I’m sorry, but this makes precisely zero sense. Why would Starfleet allow a warmongering, xenophobic despot to command their most advanced ship during the most critical mission of the war? Sure, there’s some vague justification for it. There were some private conversations between Georgiou and Sarek, and presumably between Georgiou and Cornwell. I think we’re really leaning into the whole “we can’t do this by the book” vibe. But, nope, it’s still ludicrous. I have no idea where it’s going, but I suspect it won’t make any sense. As cool as it is to see Michelle Yeoh back in the captain’s chair, I’d like the sense that the writers could justify it for any other reason. And I don’t think they can.

This is a very negative recap.

Yeah, it is. But I’m nitpicking to some extent. I think by now, Star Trek: Discovery has weeded out the folks who are truly bothered by this kind of thing, and whoever’s left doesn’t care. And in fairness, what I admired about this episode, what I think elevated it over last week’s despite it having much less tension and excitement, is the sense that we’re tying together plot threads into one big narrative tapestry, rather than just dumping all the previous stitching in the bin every time we decide on a new colour.

Blimey, that was a tortured metaphor. But you get what I mean. However dumb Tyler’s current arc is, at least it hasn’t been abandoned. It was nice to see Cornwell and Sarek. We’re once again focusing on the Klingon conflict, and what we saw in the Mirror Universe is factoring into the outcome of it. Did it take an extraordinary amount of contrivance to get us here? Yep. But we’re here now. Let’s make the most of it.

At this point, why the hell not?