The Mixed Match Challenge is an interesting concept that has generally been pretty lacklustre in execution. It’s a good opportunity to pair talent together in interesting and/or unique ways or to bust kayfabe by having husband-and-wife teams.

But, so far, the idea has been undermined by two things: A peculiar insistence on broadcasting exclusively on Facebook Watch, and a complete lack of stakes. There’s nothing to play for here, which never helps. I mean, the winners get money for a charity of their choice, which is lovely. But in terms of long-form storytelling… nada. 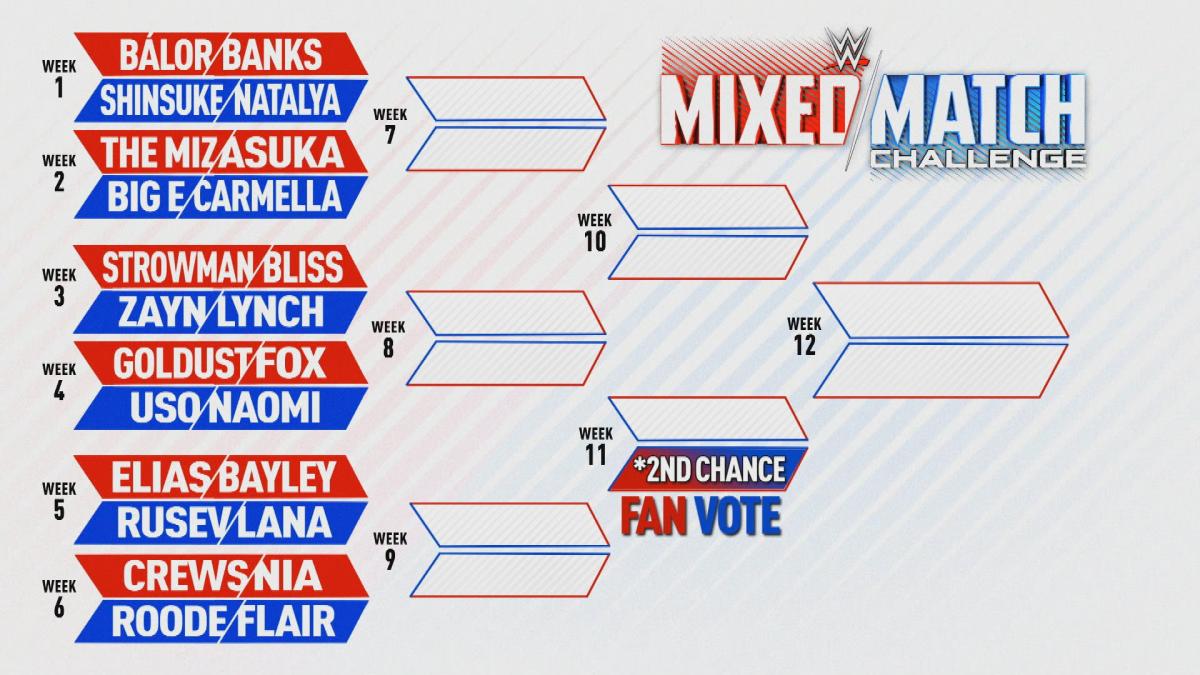 Anyway, as we’re still in the early days of our WWE coverage here at RSC, this is a special bonus post that recaps the first four weeks of the tournament. From now on, you’ll be able to find my Mixed Match Challenge recaps along with 205 Live.

Here are this week’s recaps:

As much as I struggle to see the value in this tournament, there were worse ways to kick it off than with four of the best workers in the company. The bare-bones presentation works, and the length was about right, too. It’s a minimalist setup but it didn’t overstay its welcome at all. And I’m yet to see too many of the inevitable flaws that a whole string of these mixed tag matches are likely to be hamstrung by.

Banks and Balor, undoubtedly the best-looking team in the tournament, represented Monday Night Raw with a lot of chemistry and a Too Sweet. I enjoyed some of the cowardly heel work from Natalya, and the spot at ringside where Nakamura accidentally caught Sasha. This tournament seems to be going for a playful, light-hearted tone, at least in the opening round. Stuff like that feels more reminiscent of a house show than a TV taping, where talent is more likely to play the crowd or go off-storyline for a fun spot.

Anyhow, the right team went over, and I suspect Balor and Banks might be frontrunners to win the whole tournament. Banks forced the tap from Natalya with the Banks Statement after a pretty enjoyable final sequence.

This was a match of odd pairings and even odder shenanigans.

Less straightforward than the previous week, this match made plenty of time for fun spots and outright comedy as the Miz and Asuka exaggerated their characters about as far as they could go. We got Carmella handing Asuka a foam L, with Asuka thanking and bowing. We got Asuka ranting in Japanese, and the Miz translating into his overwhelmingly arrogant heel-speak. And we got matching outfits and… pancakes, which, realistically, were the only things that Big E and Miss Money in the Bank really brought to the contest.

So, the right team went over again – and largely, again, on the strength of charisma. The undefeated Empress of Tomorrow tapped out Carmella with an armbar, but the in-ring highlight was when Miz and Asuka both unleashed patented low kicks against their kneeling opponents. Team Awe-suka might go all the way.

Result: The Miz and Asuka win via submission.

The in-ring action here was lacklustre; mostly just average stuff between the women until Strowman was eventually able to get his hands on Zayn. Forget all that.

Strowman and Bliss are representing Connor’s Cure in this tournament – the charity that WWE started. There’s a good chance they win the whole thing. Which should feel shady and manipulative, but you know what? This team is great. I actually want them to win. Braun has surprising comic timing, and his will-they-won’t-they vibe with Alexa is a great way to book his character away from the main shows. The crowd were lapping it up, and Alexa’s “We’re gonna go all the way” line just goes to show that there’s no use-by date on lowbrow innuendo. And nor should there be.

For anyone interested, the finish came from Alexa hitting Twisted Bliss off of Braun’s shoulders, which was a cool-looking spot. I hope they do that in every match.

(Is Braun Strowman really “kinda cute”? You be the judge.)

Goldust was originally supposed to team with Alicia Fox. Luckily, Mandy Rose used to go buy the name “The Golden Goddess”, and the “RoseGold” portmanteau writes itself.

Daniel Bryan was also the special referee for this match, voted for “democratically” by the WWE Universe.

This was kind of a roast battle for the first half. The men had some comedy spots and competitive back-and-forth. Goldust kisses Mandy’s hand; Jimmy kisses Naomi’s hand. And so on. It’s hardly riveting television, but once the match started to heat up there were some fun spots building to a decent final sequence. Naomi hit the Rear View and Jimmy hit the Superfly Splash, both on Goldust, for the pinfall victory.

After the match, Rusev and Lana interrupted the celebrations. Rusev sang a song, and called Jimmy “Jim”, which had me laughing more than anything else that happened in the match. Rusev and Lana take on Elias and Bayley next week.