In the finale of Star Trek: Discovery, the USS Discovery and its crew grappled with how to end the war against the Klingon Empire – and whether they should betray their principles to do it. Will You Take My Hand? aired on February 12, 2018, and starred Sonequa Martin-Green, Michelle Yeoh and Shazad Latif.

Well, this is awkward. Not for me, obviously. As we established way back when I started these recaps, I don’t know anything about Star Trek. I don’t know or, frankly, care what the show is supposed to be; what it should be about, which ideals it ought to embody. But the fans cared. The fans – a significant number of them, anyway – who insisted throughout the first season of Star Trek: Discovery that the new show was sacrilegious. A betrayal. That it wasn’t Star Trek – at least, not really. Will You Take My Hand?, the season finale, has something to say to those fans.

I’ve had my fair share of problems with this show. I got fed up with it when it detonated the Mirror Universe story arc without much ceremony, killing off a major fan-favourite character in the process. And I thought last week’s episode was teetering so precariously on a mountain of contrivance that it was liable to collapse into rubble at any moment. This week’s conclusion doesn’t excuse all the weird plot meanderings and inconsistent characterisations that got us to this point. But it helps. At various points throughout the hour, characters say things that seem to be coming directly from the writers. “See? We told you we knew what we were doing.”

Whether or not this was all planned or just a hasty course-correction hardly matters. What matters is that Will You Take My Hand? was an excellent, even inspiring episode of television that tried very hard to feel like a legitimate answer to the various lingering questions that had been raised throughout the season. It was well-directed. It snipped off dangling plot threads; gave each character a chance to be a hero or redeem themselves. And it finally learned to embrace the forward-looking themes of optimistic and hopeful science-fiction that have been the long-beloved cornerstones of the franchise since the 1960s.

Can’t really ask for much more, can you?

Picking things up where we left them, we joined the USS Discovery as the crew continued to plot their terrible idea of bombing the Klingon homeworld, Qo’noS. The Terran Georgiou, now acting Captain, is doing a predictably terrible job of impersonating her Prime counterpart. She batters L’Rell for information. And she emotionally abuses Tyler. But she gets what she wants, which is something resembling a plan. She takes Burnham, Tyler and Tilly with her to an outpost on the planet’s surface, where they hope to obtain information about where best to drop off the scanning drone that’ll map Qo’noS’s volcanic tunnels.

Georgiou gets laid. Tilly gets high. Tyler and Burnham get emotional. And the audience get confirmation that what they suspected is true: That isn’t a scanning device in Georgiou’s briefcase. It’s a giant f**k-off bomb that’ll render the entire planet uninhabitable. Genocide with handles. And Starfleet knew all about it.

A horrified Burnham confronts Admiral Cornwell about this information. I’m paraphrasing, but she basically says its bullshit. It’s betrays the principles of the Federation. There’s a better, more sophisticated way of winning this war, and for bonus points it even includes the bomb. And so they give the detonator to L’Rell. With the fate of Qo’noS in her hands, she’s able to unite the fractured houses of the Klingon Empire. The war is over. 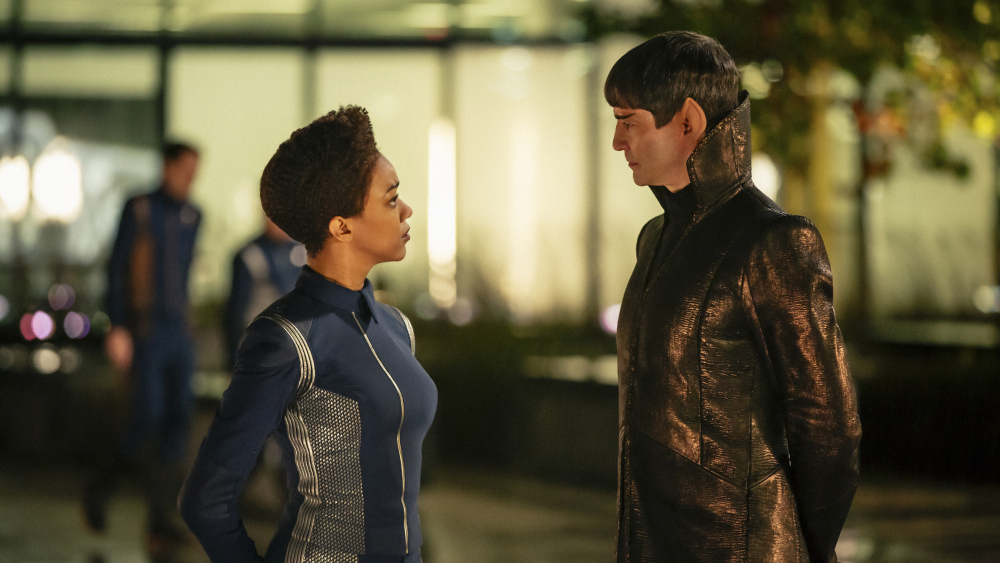 And nobody even died. The bloodless finale instead emphasised the discussion of ideals; and without the need for offing anyone arbitrarily just for dramatic heft. (When Georgiou insisted on taking Tilly planetside, I was convinced she was going to end up dead. Imagine my joy when she just ended up doing bong hits.) After the action-heavy episodes leading up to this one, Will You Take My Hand? offered a refreshing change of pace. And it was a necessary one, because we were never going to buy into something like, say, Tyler’s redemptive arc, in the midst of pew-pew laser gunfights.

That having been said, I’m still not sure I buy it. But it was handled well enough that it didn’t actively annoy me, so that’s something. After effectively neutering Voq’s identity (though retaining his memories, one assumes for plot purposes) Tyler was able to reconcile with Burnham – by saying goodbye. He’s too Klingon for the Federation and too human for the Klingons. This episode did a good job of justifying Burnham’s trauma and her resentment of the Klingons, and if it didn’t do quite a good enough job to convince me that Tyler hasn’t been let off the hook more than he deserves, it at least charmed me into not caring all that much.

At some point during Burnham’s lengthy speech to the council as her and her crewmen were awarded with well-deserved honours, it occurred to me how much fun it has been to cover this show on a weekly basis. I haven’t always enjoyed it, but just as both the Federation and the Klingon Empire struggle to justify their place in the galaxy, so too have I grappled with my relationship to Star Trek: Discovery. I still don’t know entirely how I feel about it. It was never what I anticipated; it surprised and delight, confounded and confused, disappointed and dismayed. That’s not bad going for 15 episodes. If it’s not the mark of a good or consistent show, it’s at least indicative of an interesting and ambitious one.

At the end of the episode, the Discovery heads to Vulcan to pick up its new captain. Before it arrives, it’s waylaid by a distress signal from a fellow starship. The final shot is of the USS Discovery pulling up alongside the USS Enterprise. Now, as I’ve said, I’m not a Star Trek guy. But something tells me that might be a big deal.

I don’t know where we’re going next, and I don’t much care. Just so long as we go there boldly.