Black Lightning returns after a week on hiatus as CW continues to bring us the tale of Jefferson Pierce juggling the role as father and superhero, as well as the damage and fallout from his choices. Episode 6, Three Sevens: The Book of Thunder, aired February 27, 2018 and stars Cress Williams, China Ann McClane, and Nafessa Williams.

Black Lighting took a well-timed hiatus this past week and gave its cable audience the opportunity to simmer in the choices of Jefferson Pierce over the past few weeks, as he tries to balance his family, his ex-wife and his salvation of the surrounding community. The last time we saw Pierce, he was being kicked into a coma in a back alley by Tobias Whale’s right-hand man. Episode 6, entitled Three Sevens: The Book of Thunder, tries to funnel several plot points together as Black Lightning midseason season finale. Some instances it works, sometimes it misses the mark. Overall, this episode adds some very intriguing themes moving forward.

Three Sevens opens up directly after the events of episode 5, without skipping a beat. After Joey Toledo puts the beat down on Pierce in a dark alley, Jefferson’s injuries prevent him from escaping, and he only survives the police manhunt due to Gambi”s efforts. Gambi makes it known to Jefferson’s ex-wife Lynn that he is in need of serious help, and that he is in over his head with Jefferson’s condition.

After safely transporting Jefferson back to the lab, Lynn compares his brain scans to those of an addict of Green Light and notices startling similarities.

Anissa’s story is where the comparison problems begin in this episode of Black Lightning. In an attempt to seem relevant and culturally aware of the current social climate in America, Anissa’s story begins with a shot for shot retelling of the Charlottesville, Virginia protests over a confederate statue that happened last year. Down to having a bystander run over by a car and counter protesters shouting, “you will not replace us!”.

Let me clear the air about something. I am an African-American male who is aware of what has been happening in terms of racial confrontation the past few decades. I understand the meaning and movement behind the beginning of Anissa’s story, but those who are a part of a people group subjected to racial prejudice often do not need to be reminded of it, especially when using an “escape” like superhero television. Moving on. 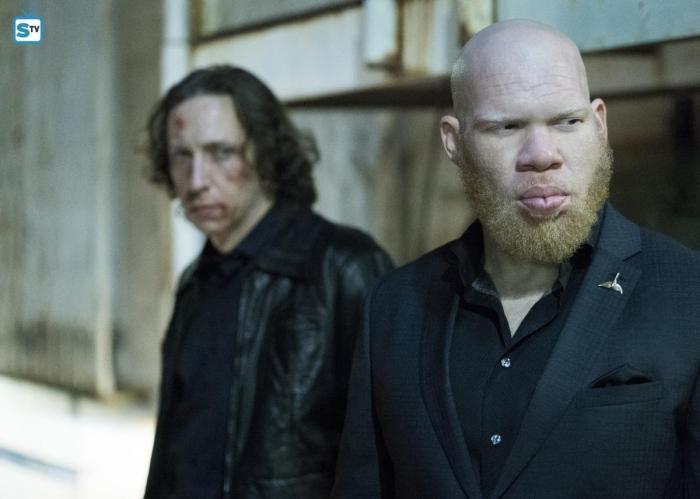 Anissa is arrested for her participation in the protests and wait for her father to retrieve her from police custody. It is at that moment where Jefferson has a heart to heart about racial prejudice and why it is so dangerous for her. (Correct timing to remind someone of racial injustice.) In that moment of “scolding” Jefferson does realize that she is reflecting exactly what he does on a daily basis.

Later, back at high school, Jefferson has another moment of “racial awareness” with her younger daughter Jennifer. This time, it’s between black schoolmates, and Jefferson introduces her daughter to the mindset of “crabs in a bucket.” This entire conversation nearly makes up for ill-timed racial issues near the beginning of Anissa’s arc. But I digress. Jennifer shows him that the source of this cyberbullying against her is from Khalil, her somewhat boyfriend in a wheelchair.

Jefferson and Jennifer pay Khalil a visit and the audience finally is rewarded for their patience with Khalil’s story arc. Khalil is in a sour mood, as expected, and lashes out at Jennifer and blames her for his current predicament. Just as soon as his character gets good, Three Sevens moves on to Anissa’s story.

Anissa returns to the confederate statue in her new costume and destroys it with her new powers, despite students in mourning all around her.

It is around this time that Black Lightning begins to put his plan into action. After surviving his coma and speaking with Gambi, he realizes that if Joey Toledo is back, that must mean Tobias is back as well. Jefferson finds the doctor who has been in contact with Tobias, trying to treat his albinism, and recruits him to find out when and where Tobias will arrive so he can kill Tobias. 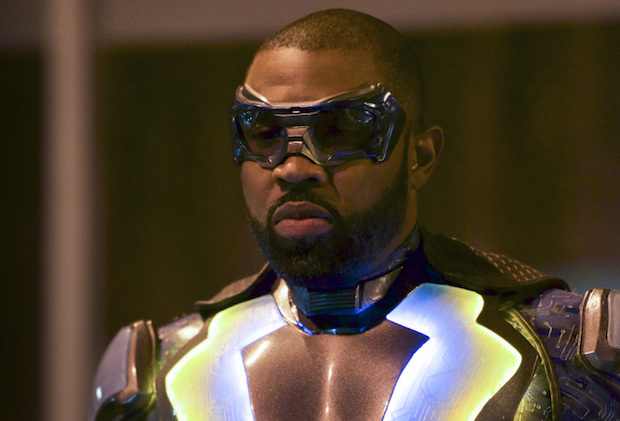 Jefferson is contacted by the doctor and arrives at the exact time and place to see Tobias Whale and Toledo exit a car and head towards a building. Standing on a roof, Jefferson takes aim and has to be talked down from murdering Tobias by Gambi and his ex-wife Lynn from her lab. While talking him down, Lynn is attacked and Jefferson can hear it in his earpiece.

At the end of this episode, Jefferson heads to aid his wife after she was attacked and finds another costumed hero with her. Mistaking the vigilante for a villain, he attacks the assailant and the two fight to save Lynn. After a while of decent hand to hand combat, Jefferson defeats the assailant and realizes that it is his daughter, Anissa! (It took him a little too long to realize that. Open your eyes next time, Pierce.)

There are a few cliffhangers left at the end of Three Sevens. We see Khalil in a car with Tobias explaining that he would like to help, but that he cannot walk. Tobias then promises him that he will walk soon enough.

Meanwhile, Gambi walks into Lady Eve’s morgue. Apparently, these two have a dark history, and Gambi approaches Eve inquiring if she remembers the deal that they struck up long ago. Eve agrees with him that the Pierce family is off limits, but argues that Lynn finding the brain scan research was against protocol. Eve also reminded him that Gambi needs to keep his promise as well, keeping Tobias a secret.

There were some good things and bad things in this episode of Black Lightning, but as a whole, this was a step in the right direction where last week was a small misstep. The cliffhangers of Gambi and Khalil were a nice touch and I am looking forward to Anissa and Jefferson’s first conversation after that throw down.