Episode one of Ash vs. Evil Dead gave us an unforeseen new element to the show, with the introduction of Ash’s daughter, Brandy (Carver-O’Neill) and this episode, Booth Three, made it abundantly clear that she is going to have a huge part to play in the story of this season.

Ash vs. Evil Dead S3E2, Booth Three, begins with the excessively explosive birth of Ruby’s new demon child, which we knew she created in the last episode. Ruby is driving along a dark road at night when she nearly crashes into a couple due to the birth. The couple is visibly shocked by the huge, bloody explosion from within the car, and go to investigate before the man is viciously attacked by the newborn demon in what proves to be yet another example of the show’s impeccable practical effects work.

Ruby, covered in her own blood, awakens, manages to control her new child and takes the terrified woman hostage. Back with Ash, we see him try to create a relationship with his newfound daughter, who firmly keeps an emotional distance between them. Pablo is confronted by Dalton (Lindsay Farris), the supposed member of the Knights of Sumeria who Kelly brought along at the end of episode one, as Pablo’s body markings continue to flare up.

Dalton, who has been searching his entire life to find Ash and fight alongside him, tells Kelly the beautifully animated story of the history of his order and its links to the Necronomicon, and explains that it is inevitable that Pablo will eventually turn demonic due to his connection to the book, suggesting our favourite mustachioed deadite slayer may have to die.

Kelly doesn’t tell Pablo any of this and in the next scene, he explains how upset he was at her leaving once the group had seemingly stopped evil at the end of season two. The relationship between these two has been a close one for a while now, occasionally looking like it could turn romantic. Perhaps Pablo is a little jealous that Kelly has returned with Dalton, a man who seems to dislike him. Perhaps season three will see some difficult decisions have to made within Kelly and Pablo’s relationship.

With this, Dalton himself certainly has the potential to be a really interesting character in the remainder of this season. With his adoration of Ash, yet unfettering dedication to his cause, we could be in for a very interesting group dynamic in later episodes. 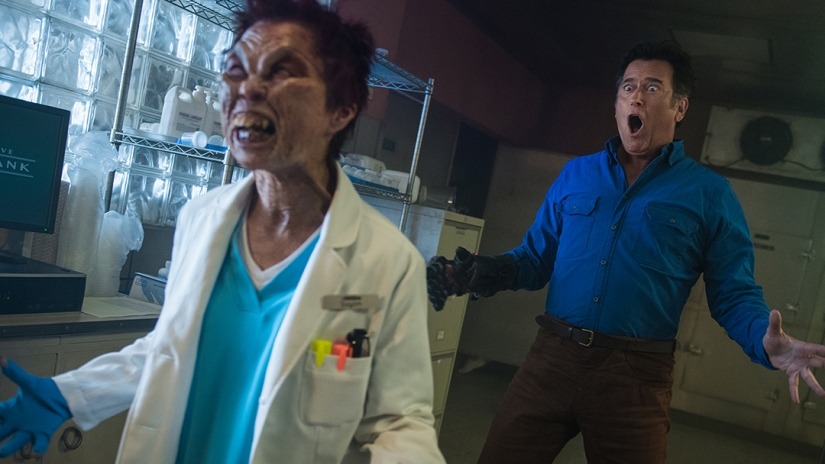 While all this is going on, Ash tries to talk to Brandy again when driving her to see her counselor, but instead of having a meaningful discussion, does what only Ash could do and starts talking about what he and her mother would do in the back of the car. Perhaps the most intriguing point of Booth Three follows, as we see Brandy in her counseling session and it is revealed that her counselor is actually Ruby in disguise; clearly forging a plan to destroy Ash from within his own family.

While on the subject of family, this episode (ironically, not the one called “Family”) seems obsessed with it. From the demon birth to the beginning of Ruby’s manipulation of Brandy, not to mention the final act which takes place in a sperm bank…we’ll get onto that. The episode’s constant repeating about “destroying the seed” and the later confirmation that Ruby’s new child was created in Ash’s image all work to tell us clearly that children are going to play a huge part in this particular season of Ash vs. Evil Dead.

Although, the potential scenario of Ash vs. evil demon clone baby Ash is by far the most entertaining!

This week’s final battle at the sperm bank sees an x-rated magazine come to life and attempt to harm Ash in the only way you would expect. It is one of the more memorable and hilarious battles of the whole series and finishes with this week’s “Ash quote of the week”. While the actual battle with a deadite, this week a doctor at the sperm bank, was not as strong as episode one’s, the living x-rated magazine as a little side battle does more than make up for it.

Criticisms towards Ash vs. Evil Dead may say that each episode feels exactly the same, and while that’s not exactly untrue, the show always manages to create something completely new and just as bizarre in every single episode. As for the story, Booth Three felt very different, and does exactly what all strong episode twos should do; build on what was new in episode one and get fans thinking about what will come later on.

Ash quote of the week: Living X-rated magazine: “No! I haven’t finished yet!” Ash: “That’s what they all say, baby.”