Review | The Legend of Korra: Turf Wars Part One


Picking up right after the events of the TV series, The Legend of Korra: Turf Wars Part One is the first of a three-part comic series, written by Michael Dante DiMartino (who has previously worked on the Avatar comic series) and? Irene Koh. In this new adventure, Korra has to deal with growing tensions with the Spirit World and a growing threat from the gangs of Republic City.

Korra can’t seem to catch a break. In The Legend of Korra: Turf Wars, after seemingly saving the world (and the Spirit World), she was finally going to take a well-earned break in the Spirit World with Asami. The break is cut short with growing resentment in the Spirit World as the humans and the spirits just can’t seem to get along. The newly created spirit portal in Republic City is under threat from a property developer who wants to turn it into an amusement park, and understandably the spirits are less than thrilled. Throw some good old-fashioned gang troubles into the mix and you’ve got a really interesting story.

I don’t think it’s a stretch to say that I love Avatar (as in The Last Airbender, not the big blue cat people) and The Legend of Korra. They are easily among my favourite animated series’ of all time, and probably up there with my favourite TV shows of all time. The world created in Avatar (and then further developed in The Legend of Korra) is so rich that there are still so many stories that could and should be told. When this series of Korra comics was announced I was really keen to delve back into that world.

Comic book continuations of TV shows have been a little hit and miss to date, although I only really seem to have experience of those from the Wheadon-verse. Some of the Firefly comics are actually quite good, as were the issues of the Angel follow-on that I actually read, to a lesser degree. The Buffy comics (what little I read of them) really didn’t do it for me though. As excited as I was about revisiting Republic City with some of my favourite characters, I was a little worried about how well the stories would travel from screen to page. 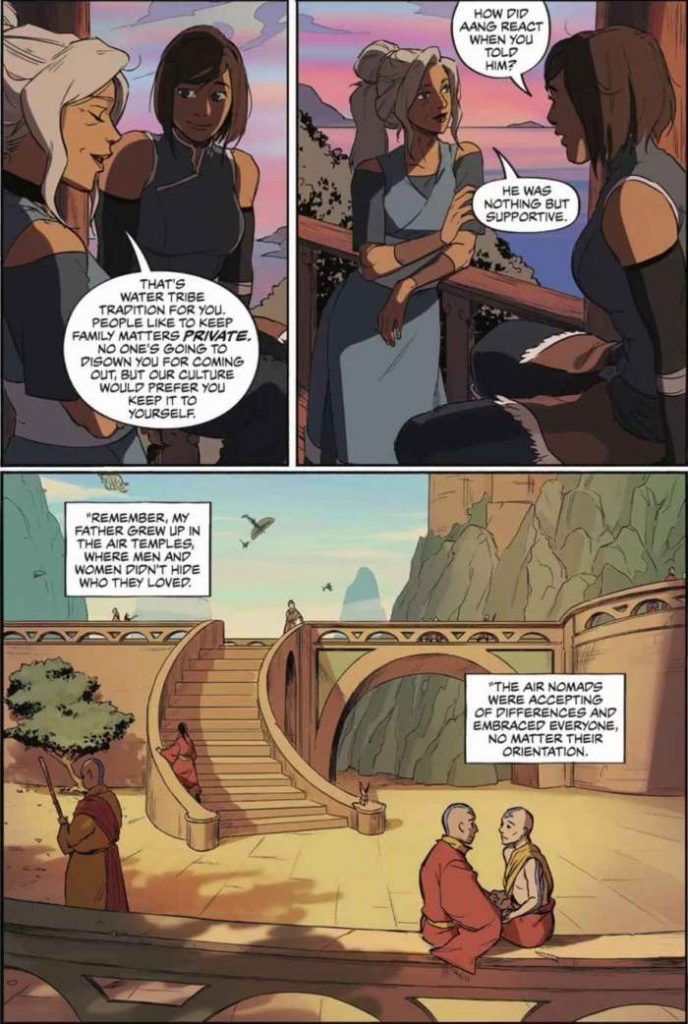 I’m pleased to report that “Turf Wars” stacks up really well against the animated series. This actually feels like a genuine continuation of the story (and the world) that I love so much. The story does pick up mere moments after the conclusion of the TV series, and does something that I’ve always wanted to see with a TV show. It focuses on what happens after the dramatic victory has been won, after the hero has saved the day and the celebrations have died down. We usually see the climactic fight and everyone is happy, but just how easy is it to return to normalcy after a (potentially) cataclysmic event?

One of the most talked about stories while the TV show was airing was the relationship between Asami and Korra. While I was watching I never really thought there was any ambiguity that they were involved in a romantic relationship, but apparently certain corners of the Internet either couldn’t or wouldn’t believe this to be the case. I was really pleased to see that the comics don’t shy away from this and instead focus on the implications of their relationship, how it will effect those around them, and actually allow the romance between the two to develop.

The comic is beautifully drawn, perfectly recreating the look and feel of the TV show, while at the same managing to be different enough to be its own thing. The first instalment is well-written, with the dialogue feeling right for the characters. I think what I’m saying in quite a roundabout way is that this feels like The Legend of Korra that I know and love and the characters are consistent and familiar. 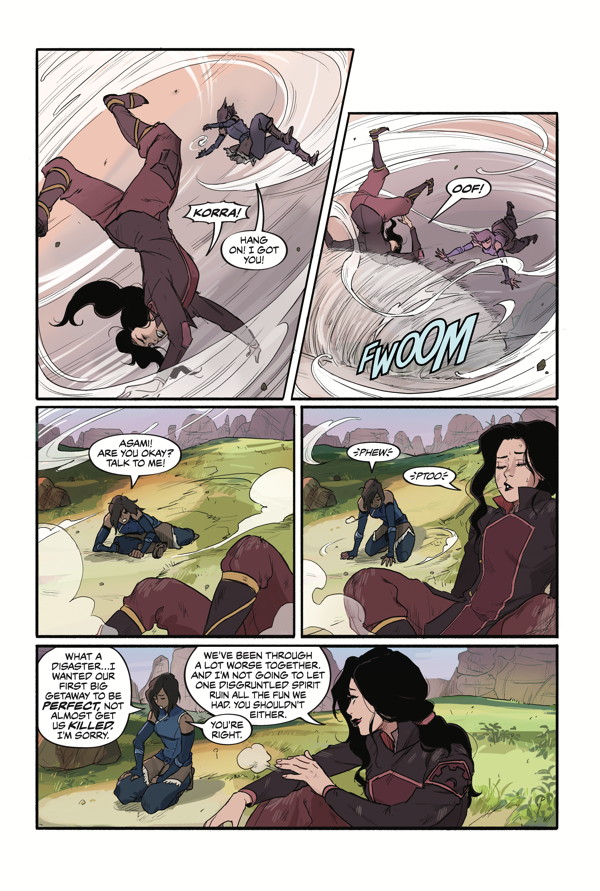 This first issue is really just a lot of scene setting, moving the pieces into the right place for the remaining two issues. Despite it being a lot of place-setting, I still think it was a good read, and it has left me really keen to see exactly where the series is going to go. In an ideal world Korra (and Avatar) would have run for season after season, but as it is this is a pretty good way for me to get my fix. The stories that they’re setting up feel like they would actually happen in the universe of Korra; they seem like events that would actually happen given everything that has gone before them.

I must admit I’m a little behind, with the second issue already being available, but given part three isn’t available until August 2018 I was trying to ration my Korra fix so that I didn’t have a huge gap between issues. That’s all gone out of the window now, as I’m really keen to see what happens next and part two is currently winging its way to me (thank you Amazon Prime).

I think if you were a fan of the original series then you are going to love this comic book continuation. I’d imagine if you were going in entirely cold, having never seen Avatar or The Legend of Korra before, you are going to struggle with Turf Wars. Actually, if you haven’t seen those two series then what are you doing with your life. Stop what you’re doing immediately and go and watch both series. I’ll wait…

All caught up? Good. Right, now go and read Turf Wars. It’s a great read, it’s very much in keeping with spirit of the original while feeling like its own thing.

1 thought on “Review | The Legend of Korra: Turf Wars Part One”