Atlanta is a comedy-drama that follows two cousins, Earnest and Alfred, under the moniker “Paper Boi”, as they live, thrive, and navigate their way through the hip-hop scene in Atlanta, Georgia in order to improve the lives of their families. Atlanta Season 2 entitled “Robbin Season” stars Donald Glover, Brian Tyree Henry, Lakeith Stanfield, and Zarie Beetz. The Alligator Man aired March 1, 2018.

Christmas is around the corner, and for those who can’t afford to bring happiness to their family, it’s “robbin season”. Lakeith Stanfield’s character Darius states the thesis of not only this episode, Alligator Man, but the whole season, midway through the premiere. This season looks to be a heightened version of the previous iteration, with Earnest’s struggle taking center stage. Before we dive into the new season of Atlanta, we reflect on each main character’s progression through season one.

Earnest, played by artist/director extraordinaire Donald Glover, is a Princeton University drop-out with no money to spend or a home to live in. He spends his time staying in his parents home, as well as “squatting” at his girlfriend’s place. When his cousin Alfred tries to acquire fame in the hip-hop world, Earnest tries to hitch his wagon to “Paper Boi” in order to provide for his newborn daughter.

Earnest’s cousin “Paper Boi” is slowly accruing fans in the Atlanta area, however, his growing fan base is just a by-product of his “gangbanger” smokescreen. Paper Boi and Earnest went to jail in a parking lot shooting fiasco, and Paper Boi rides the wave of fandom and hard criminal record sales, regardless if he his or isn’t a criminal.

Lakeith Stanfield’s character Darius is the third member of the triumvirate in Atlanta and is philosophical stoner personnel to compliment the group’s intelligence. There’s really so much within Darius that is revealed piece by piece but hidden behind the layered “stoner” moniker.

Earnest’s girlfriend Van spent the majority of season one entertaining other dating options, seeing her ties with Earnest weaken over time. She maintains that she stays with Earnest only for the sake of their daughter. At the conclusion of season one, Earnest is living in a storage unit, kicked out of every possible place to stay. On to season two!

At the center of this show, Atlanta is a story of black people living in Georgia who are trying to make ends meet for their friends and family. That is ultimately why this show connects and works on more than just one level. Alligator Man opens up to two black kids playing FIFA soccer and conspiring to go get drugs from a local fast-food restaurant. The job goes horribly and shooting breaks out, only for women to leave their car covered in blood. The violence happens quickly, but there’s a sense of normalcy that makes the beginning of this episode eerie. The show offers little explanation, almost to prove that “s**t like that just happens” here in Atlanta. A bold, but convincing story note. 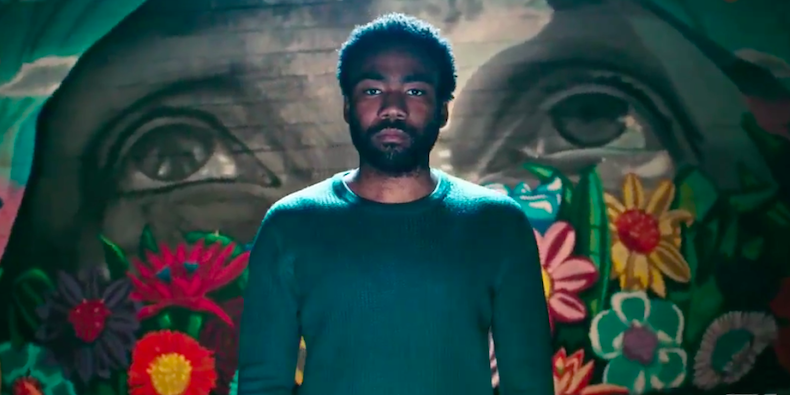 Alligator Man begins several story arcs and keeps their interest through the episode, as well as leaves them open for the season. Earnest has been kicked out of his storage-unit home and now has to find a new place to live: his cousin Paper Boi’s house. Earnest realizes that the only way he stays with his cousin Alfred is to keep him happy. Al informs him of a certain situation with his uncle that he needs to relive before the cops come. Here comes Earnest to the rescue.

It seems that Alfred’s uncle Willy has “kidnapped” his female partner in the bedroom for $50. Earnest shows up and tries to diffuse the situation using intelligence, until the police show up, and everyone begins to become slightly on edge. That’s what the police will do in an all-black neighborhood. Earnest finally approaches Willy, condemning him for his horrible character and attitude, to which Willy responds, “Earnest, you’re homeless. You’re trying to tell me about myself when you don’t even have a mirror to look at yourself.” Powerful stuff from a “family” member that rarely feels like one. As the episode ends, Willy escapes from the cops thanks to his pet alligator. Yeah, pet alligator. This show is wild and I love it.

Earnest returns to Alfred’s house to find him, Darius, and a girl named Tracy, who took his spot in the house. Earnest smiles and laughs off the false apologies from his cousin and friend, and ends up walking back through the street. The episode comes back full circle. If you are not watching Atlanta, I suggest you burn through the 10 episodes of season one and get ready for season two.