With the first two episodes in season three of Ash vs. Evil Dead already focussing so much on family, this one works to fully solidify that as the main focal theme of the entire season. Where Apparently Dead seemed to differ from the first two, however, was in its story.

Episode two, in particular, worked really well in developing what new information we had gained from the premiere and setting up the story for the rest of the season. This episode took one of those questions we had last week and seemed to make it already irrelevant.

Apparently Dead begins with the funeral of Candace, Brandy’s mother, who we met in the season premiere and was prompty decapitated after turning into a deadite. Ash even shows up to show his dedication to his daughter but becomes suspicious after finding out that Candace’s head had been reattached for the funeral. Brandy seems to appreciate Ash being there to support her even though she tells him that he didn’t have to come. Ash goes to pay his respects to Candace alone/check if she’s still a demon, which of course she is.

This all leads to a particularly hilarious scene where Ash, who has been trapped in Candace’s coffin, bursts out of it during the funeral ceremony, covered in blood, loudly exclaims, “F**k me!” and is followed by Candace’s now re-decapitated demonic body.

This is only the first time Ash scars his daughter for life during the course of this episode.

Once most people have left the funeral following that display, Brandy’s councillor, who we already know to be Ruby, reveals herself to Ash leading to a threatening confrontation between the two of them and a very confused Brandy. Kelly, Pablo and Dalton (“new guy” as Ash likes to call him) then show up and Ash explains to them that Ruby is back and that they will have to return once again to the site of the original cabin to retrieve the Kandarian dagger, the only weapon that can truly kill Ruby.

Back at Ash’s house, Brandy tries to accept her father despite her recent confusion and seems at least interested in trying to figure out why he does what he does. During this time, Ruby tries out another ritual in a cemetary and suceeds in raising the dead, although we do not know the significance of who she has brought back to life until later on. 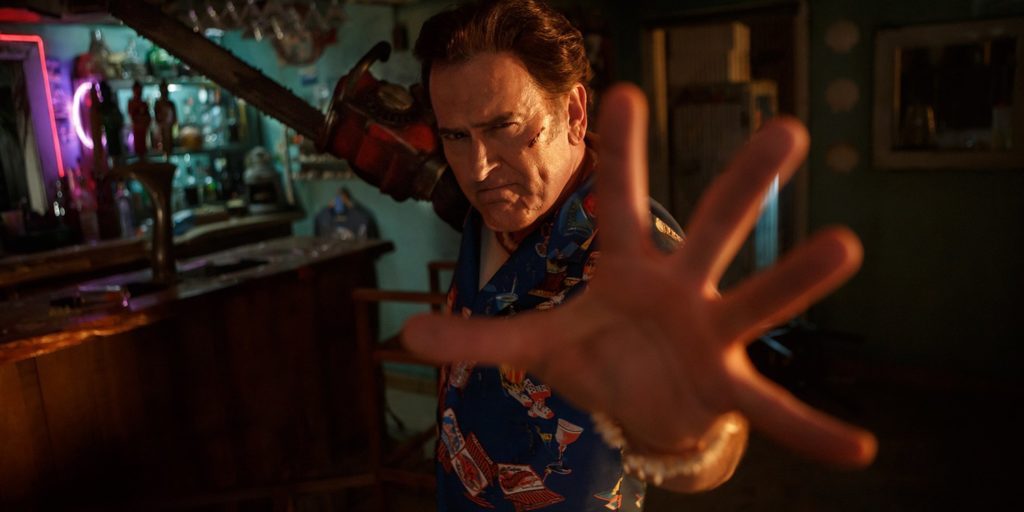 Kelly, Pablo and Dalton arrive at the site of the cabin and manage to find the dagger just before Pablo’s increasingly prevelant visions let him know that evil is very close. Dalton is still very wary of Pablo’s connection to the Necronomicon and in the subsequent small battle against the force of evil, he is impaled on a tree, momentarily turns into a deadite and screams that it was Pablo who did it. It appears that Dalton was killed after turning demonic as Pablo burst out of the trees in a truck and crashed right into him. However, when Kelly went to inspect the crash, neither Pablo or Dalton were seen.

This is Ash vs. Evil Dead however, so whenever anyone dies, they never really die, but it would seem very strange indeed if they had spent the first two episodes creating this interesting character in Dalton just to kill him off in the third. Even if he does return, he may only return as a deadite, and that wouldn’t feel like justice to the character. Surely, maybe due to his being a member of the Knights of Sumeria, he has to return the way he was.

We spend the remainder of Apparently Dead back at Ash’s house, where Ash returns after the funeral to find Brandy smiling and laughing on the couch with his father (Lee Majors). Ash’s father, whose head was run over by the Delta in season two; one of the most memorable gore effects in the show’s history. Lee Majors was a standout guest star last season and it was a treat to see him back in this, but Ash knows all too well that this isn’t his dad. This is Ruby’s work. The back and forth between Bruce Campbell and Majors is wonderful to see again and the fight that follows leads to this week’s “Ash quote of the week”.

While at first not as gory as the previous two end-of-the-episode battles this season, Ash grabs his chainsaw hand part way through and just as Brandy walks into the room to see what all the noise is, the chainsaw goes right through Brock Williams and drowns Brandy in blood.

Where Ash vs. Evil Dead‘s father/daughter relationship is going to be following the events of this episode has to wait to be seen, but Ash is going to have to do some serious convincing if he wants to stop Ruby manipulating Brandy even more.

Apparently Dead didn’t seem as strong as the previous two episodes of Ash vs. Evil Dead, but Ash, Brandy and Ruby’s storyline is still wonderful; the standout part of the young season. Kelly and Pablo are seemingly a side thought at this point but I have complete faith that the whole group, including Brandy, will be fighting evil all together before we reach the final couple of episodes.

Ash quote of the week: Putting his father’s face on a hot stove: “I like old man cooked medium rare!”