After the slight lull of last week, Ash vs. Evil Dead was back to it’s very best with this fourth episode of the new season, Unfinished Business, which aired March 18, 2018. Ash vs Evil Dead stars Bruce Campbell, Dana DeLorenzo, Ray Santiago, Arielle Carver-O’Neill and Lucy Lawless.

Remember last week, when we talked about how a character’s “death” really doesn’t mean anything in Ash vs. Evil Dead? Well, this episode is a perfect example of how to keep characters “alive” on TV long after their in-show deaths.

We rejoiced in episode three to see the return of Lee Majors as Ash’s father, Brock (albeit in undead demon form) and after the expected “second death” of him giving us one of the most memorable moments of the season so far, who would have thought he’d show up again this week.

The episode opens with Ash dismembering his father’s corpse and disposing of it, but this is interrupted by Brock’s ghost who explains that his soul is now free to wander after being re-animated by Ruby. He is at first quite shocked to see his own dismembered corpse on the floor but manages to explain why he is there. We are reminded of Brock’s first death and the fact he was about to tell Ash some seemingly very important information before the Delta turned his head to mush.

Brock shows Ash a past memory and at this point, it seemed as though this episode would turn into its own twisted version of A Christmas Carol. That did not come to pass, however, but the memory showed that a member of the Knights of Sumeria had visited Brock at the hardware store and explained to him how important his son was in the fight against evil. It is also revealed that this knight possessed the lost pages of the Necronomicon which allows a portal to the netherworld to be opened. Brock doesn’t take too kindly to the knight and kicks him down the stairs into the cellar where the ghost of Brock says he and the lost pages still are.

While Ash and his father are wrapped up in past memories and discovering vital information, Kelly arrives back at the house looking for Ash and worried about Pablo. She is shortly followed by Brandy who, after storming out at the end of the last episode, still covered in blood, has forgotten her phone. When leaving, the two are attacked by deadite Pablo who certainly proves to be the most entertaining deadite of the season so far.

Kelly and Brandy manage to make it to Ash’s old trailer but not before Kelly is badly bitten by the demonic Pablo. They are stuck there for the remainder of the episode and we leave them with yet another of Ash vs. Evil Dead‘s glorious practical effects; the face of deadite Pablo coming out of the bite mark on Kelly’s leg!

Now out of the memory, Ash and ghost Brock make their way into the cellar of the hardware store and sure enough, they find the remains of the knight and the lost pages. What is most intriguing, however, is the huge Sumerian writing on one wall. After ghost Brock has finished complaining that the knight ate all the SPAM that was stored in the cellar, Ash goes over to investigate the writing and the pages and of course, tentacles come out of the wall and start throwing Ash about the room.

The presence of Ash near these pages appears to affect the Necronomicon itself as we cut to Ruby’s house and see the book appear to begin forming a portal. Ruby arrives home, notices the disturbances and manages to communicate with someone in the netherworld who tells her that the Knights of Sumeria are still active and that Ash has found the lost pages.

Ruby appears as calm as ever and it is finally revealed that her exact plan with Brandy is to manipulate her into killing Ash. She goes to the site of the cabin where, as the person in the netherworld explained, there is a knight. Here is our second instance of someone we feared dead returning. Ruby finds deadite Dalton, still impaled by a tree branch and removes the demonic presence from him just long enough so that they can exchange a few threats and for Dalton to tell her that the Kandarian Dagger has been found. Ruby now seems particularly worried and demands Dalton tell her where it is. Dalton shoots himself in the head.

But who knows, he’ll probably return for the rest of the season. There was never anything to fear after episode three. Death means nothing in Ash vs. Evil Dead and in truth, in a world full of demons and rituals, it actually makes more sense this way. 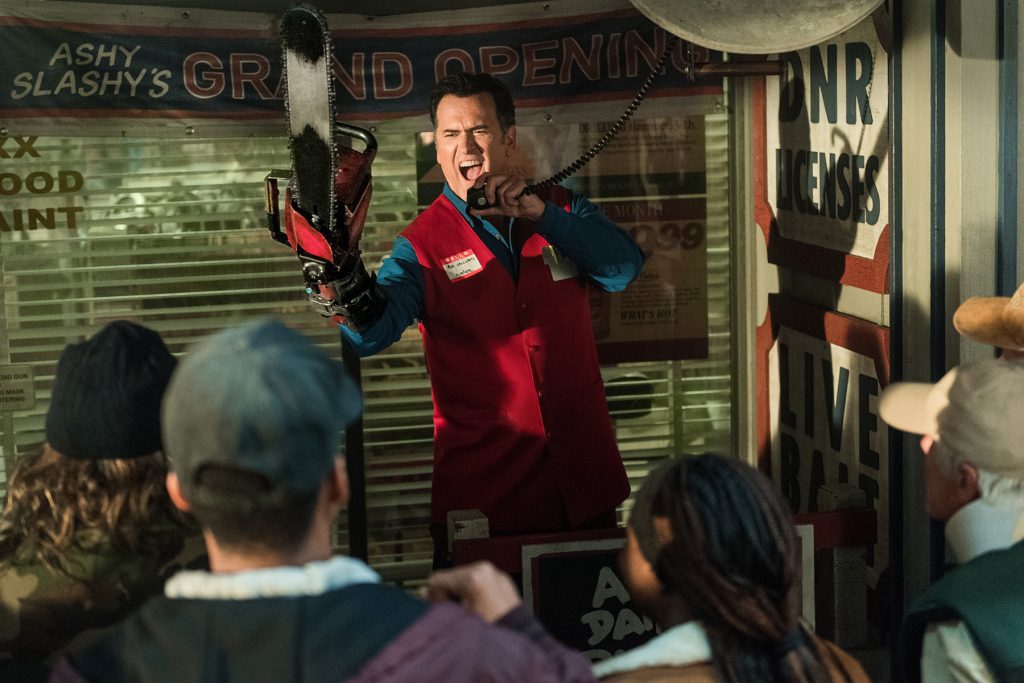 The episode ends after ghost Brock disappears back into the air, stating that his time is up. No doubt he’ll also be showing up later this season then too. Ash goes to confront Ruby at her house but, discovering she is not there, he investigates a noise he hears upstairs and we not only get a glimpse at the terrifying image of Ruby’s demon baby we saw born in episode two, but Ruby is also keeping a Scandinavian woman prisoner in the same room.

We end on two cliffhangers with Kelly’s bitemark now turning into deadite Pablo and the baby waking up. We know how deadly that baby was as soon as it was born. The final line of the episode is this week’s “Ash quote of the week”.

It is episodes like this one that make you realize why you fell in love with Ash vs. Evil Dead in the first place. It didn’t take the usual format of having a big deadite fight at the end and focused much more on divulging key information to us. Information that brings excessive amounts of excitement for the rest of the season.

It’s wonderful to know that after an ever so slightly weaker episode last week, the show can come back with easily the best, most enjoyable, and most important episode of the new season so far.

Ash Quote of the Week: Final line after the baby has woken up: “What’s Norwegian for ‘up s**t’s creek’?”