Episode six of this third season of Ash vs. Evil Dead, Tales from the Rift, aired April 1, 2018, and while at first, it seemed less “plot-heavy” than “Baby Proof”, it ended as perhaps one of the more impactful episodes of the entire show. Ash vs. Evil Dead stars Bruce Campbell, Dana DeLorenzo, Ray Santiago, Arielle carver-O’Neill and Lucy Lawless.

After last week, when perhaps the only complaint to be had about Ash vs. Evil Dead was that Ruby was hardly in the episode, Tales from the Rift completely made up for that. Lucy Lawless plays Ruby with such a devilish arrogance that she captivates you in every scene she’s in. This episode was the most she’s been given to do in any episode of this season so far, and it only makes us clamor for more action from her in the remaining four episodes.

We begin Tales from the Rift in Ruby’s home after she has taken her child back from Ash and proclaims that he is very nearly ready. Now, it’s been obvious since the start of episode two that the big fight of the whole season is going to be Ash vs. “demon created in Ash’s image,” and this little statement from Ruby is just a reminder to be excited for that coming up.

Kelly has come to confront Ruby with the Kandarian Dagger and is out for pure vengeance. This glorious fight between Kelly and Ruby is the secondary story of the episode, to begin with, but one particularly emotional moment does occur as we reach the episode’s end.

While the two badass ladies are battling it out, Ash and Brandy are strengthening their father/daughter bond over some pop-tarts following Brandy’s full acceptance of who her father is. She is still trying to figure out the weirdness of it all, but after the incredibly rocky start to their relationship that we saw earlier on in the season, it’s heartwarming in Ash vs. Evil Dead‘s own strange way to see them discussing demons as father and daughter.

A group of Knights of Sumeria turn up at Ash’s door and explain they have been sent by Dalton (remember Dalton?), who is missing. I was fearful the Knights of Sumeria were beginning to be forgotten about in the plot, but I should know better than to not trust this show to always deliver what’s promised. This groups of Knights, particularly Zoe (Emilia Burns), were a very welcome addition to this episode, and we can only hope she continues to fight alongside Ash for the remainder of the season (as we originally thought Dalton would).

Ash explains to them what was found in the cellar under the hardware store and shows them the lost pages of the Necronomicon before they all go back to the cellar to check it out for themselves. Brandy, now confused as to why she can’t find Ash in the house, goes to Pablo to ask him where her father is. Pablo, through a vision, knows immediately that Ash has gone back down to the cellar with the Knights and sees danger, so charges off to help while Brandy is yet again left out of the action. 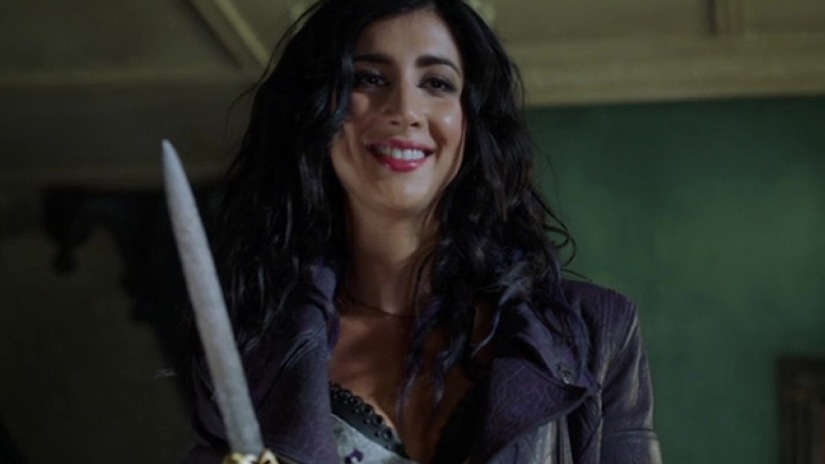 Kelly and Ruby’s fight is still going on and by this point, Kelly can hardly stand and Ruby has limbs scattered all across the room. This, of course, means nothing to immortal people, and Ruby’s limbs slowly scrape themselves back towards her body and are reattached. It may be said after every single episode, but the practical effects used in this episode are the strongest of the season at least. Not only does it include these animated limbs, but a hole through Ruby’s head which an eye grows back from, as well as a grotesque amalgamation of people that Ash has to fight in a scene very obviously reminiscent of John Carpenter’s The Thing.

This Thing-like scene occurs after Pablo reaches the cellar and, to Ash’s and the Knights’ shock, recognizes the writing on the wall immediately and succeeds in opening the rift between worlds. One Knight volunteers to go in before all others and returns quickly, as a demon and with the ability to conjoin other people to him. The quality of fights seemed to take a little dip this season around episodes three and four, but these past two weeks have seen some of the best fights in Ash vs. Evil Dead‘s history.

It may make you wonder how they could top this as we get quickly closer to the climax of the season, but after thinking about it, you know what fights are coming, and they are going to have the added emotional impact that we seldom see from Ash vs. Evil Dead‘s action scenes.

As Kelly and Ruby’s fight draws to an end, we are dealt the most emotional blow since Pablo’s first body-splitting “death” in season two. Kelly has the Kandarian Dagger turned on her and is stabbed through the stomach. If this was something like Game of Thrones, this scene would have been met with screams and shouts and crying from audiences, and for a minute, it almost seems as though Kelly might actually die, the episode after finally kissing Pablo, and just when the team needs her most.

But then we remember that this is Ash vs. Evil Dead and it’s ten times harder to actually kill anyone on this show (even if stabbed by the Kandarian Dagger apparently). The woman in the netherworld who was conversing with Ruby in the last episode tells her that the rift has been opened and Ruby then performs another ritual that sees the spirit of that woman take over Kelly’s body.

We may not have Kelly, but Dana DeLorenzo isn’t going anywhere, and we are likely to see her showcase her acting range in the next few episodes as she plays this woman pretending to be Kelly. Tales from the Rift ends with “Kelly” joining up with the team back at Ash’s house and we are left knowing that Ruby may have lost manipulation over Brandy, but this is serious.

After Tales from the Rift, it looks like we are in for a great end to the season.

Ash quote of the week: “Time to suck some saw.”