With this season of Suits coming to the usual emotional end, the firm is taking on more personal and professional challenges entwined with their day to day problems.

With this season of Suits coming to the usual emotional end, the firm is taking on more personal and professional challenges entwined with their day to day problems.

As many of you who probably suffer from it know, the love/hate relationship you form with Suits tends to evaporate by the time you reach the conclusive episodes. You muster the courage to get through the slimy, unforgiving episodes to enjoy the dramatic, audience-pleasing classics. Season 7 is probably the weakest season so far, but what the legal drama figures to conjure in every odd episode is something worth staying around for. Whereas shows like The Walking Dead, you may as well forget. Episode 14 – Pulling The Goalie provides some happiness, especially after the emotionally impactful story from last week. After the heart racing and sad moments, this feels more of an appreciation episode, allowing the characters to feel valued, with big wins.

Pulling The Goalie showed peak Louis savoring himself for a well-deserved, big win. Last week I predicted that the writers will toy with this character until the end of days – maybe I am wrong. His tenacious relationship with Sheila finally died of comedy and it got oddly serious, with her current fiance getting in on the action. Louis, for all intents and purposes, is probably the one man you would want to rival with if you were trying to fight him mentally for a girl. That sounds harsh but he panics, sweats and makes irrational decisions. I was rooting for him, but it is difficult to remain confident. The entire story was kind of ludicrous but I went with it. Engineering a lawsuit against Sheila’s fiance proves that in the world of Suits, any legal battle can be drawn up for no reason whatsoever. Mind you, I wouldn’t be surprised if this kind of personal s**t happens in real life. His win came, he won the battle and Sheila came running into his arms. I am doubtful of where this story is going and I am sure it will end in tears in his legendary stinky mud bath.

Pulling The Goalie returned to the early days with added nostalgia. Remember when Mike and Harvey used to have that brother mentality? Those were the kind of moments that kept you attached to the drama as you could imagine having a friend like that in such a high-intensity professional environment. A judge that dealt with Mike’s sentencing is now wrongfully accused of something outlandish, which could mean she loses her reputation and license. Mike is, as usual, the soft one, and Harvey is all about business. The two still paired up and took on the case to save the flailing judge. These two really shouldn’t be working with each other by now; too much has happened, and if I was Mike (or Harvey) I’d be working somewhere else just to save the friendship. Suits does not work in that way, in terms of realism and the workplace, which I guess makes the drama less and less realistic with each season passing. Mike entering a prison and leaving within one season made it unrealistic anyway. He was blatantly a fraud but the problem is, Suits could not live with Mike out of the limelight, it just does not work. Since then, they have been suffering slightly from trying to recover from the misfire. 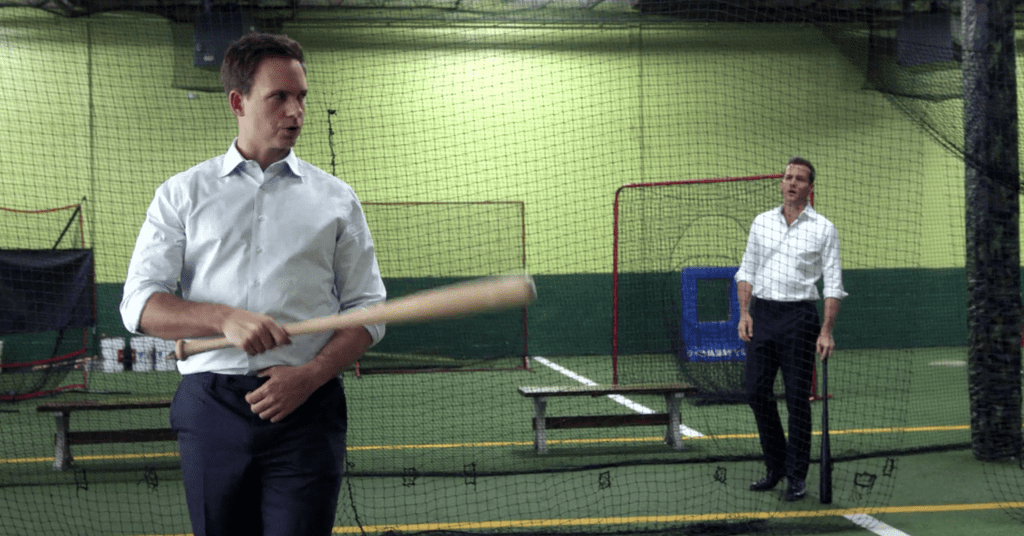 Suits indirectly dealt with Donna and Harvey by putting the ex-secretary into an undesirable situation where she could lose the lease on the office building from a sleazy, pervy and overcompensating property investor. She refuses to go to Harvey to save the contract and instead confides in Rachel to save the contract. Now, the reason why she will not go to the best lawyer in the entire show is that he saved her job the week before, which resulted in breaking up with Paula. It’s all kind of sweet, but despite the legal heroics of Donna and Rachel to save the lease, which was all very predictable, we are all waiting to see how this truly pans out. The writers have two choices; allow the two to finally romantically entangle or throw a spanner in the works to split them further away. Regardless, they need to deal with this long drawn-out storyline effectively and not completely spoil it like they did with Mike in prison.

Despite my blase comments, Pulling The Goalie was an okay episode. It did not excite as the previous did, but it remained interesting, unlike some dull and pointless episodes from this season. From this moment on, there is no real way of knowing how this is going to end. This is not a credit to the writers; I guess it is a negative to the overall clumsiness of the season, but it is apparent that this one is going to end strong, as usual.