Netflix Anime series Aggretsuko / ???????? follows Retsuko the Red Panda, that sings death metal in a karaoke booth as an outlet to the daily stresses of life.

Netflix Anime series Aggretsuko / ???????? follows Retsuko the Red Panda, that sings death metal in a karaoke booth as an outlet to the daily stresses of life.

Netflix’s new anime series Aggretsuko / ???????? is oddly amusing despite its underlying seriousness. Its simplicity does not curtail its effort to provide raw emotion. The story follows Retsuko the Red Panda, who has to deal with the shortcomings and stresses of life, which is mostly confined to her daily routine at her office job. She is cute, which makes the entire ordeal equally entertaining because when she suppresses her anger and lets it out in the form of death metal, it is quirkily entertaining.

In order for Aggretsuko / ???????? to work in its simplest form, you have to understand Retsuko and her socially sapping environment. The anime does remarkably well in detailing her emotions in order for the audience to understand the death metal outbursts. Retsuko is suppressed by the usual societal norms that consume the modern person every day. She hates her daily office life, she is demoralized by her early morning starts, she is working for a boss who plainly does not appreciate her efforts and she is surrounded by peers that misunderstand her introvert ways. The story is nothing new or innovative but its approach magnifies her problems and highlights the irritation of her crippling situations. There is a real theme of compliance with Retsuko, who especially at the start says yes to absolutely everything, accepts everyone’s opinion and barely shows her true soul. The scenario of her character is saddening when you see her reduce herself to screaming lyrics on top of a toilet cubicle. As the story progresses her compliance weakens which adds to her unique character development. The lesson learned is that everyone needs an outlet, no matter how suppressed you are. 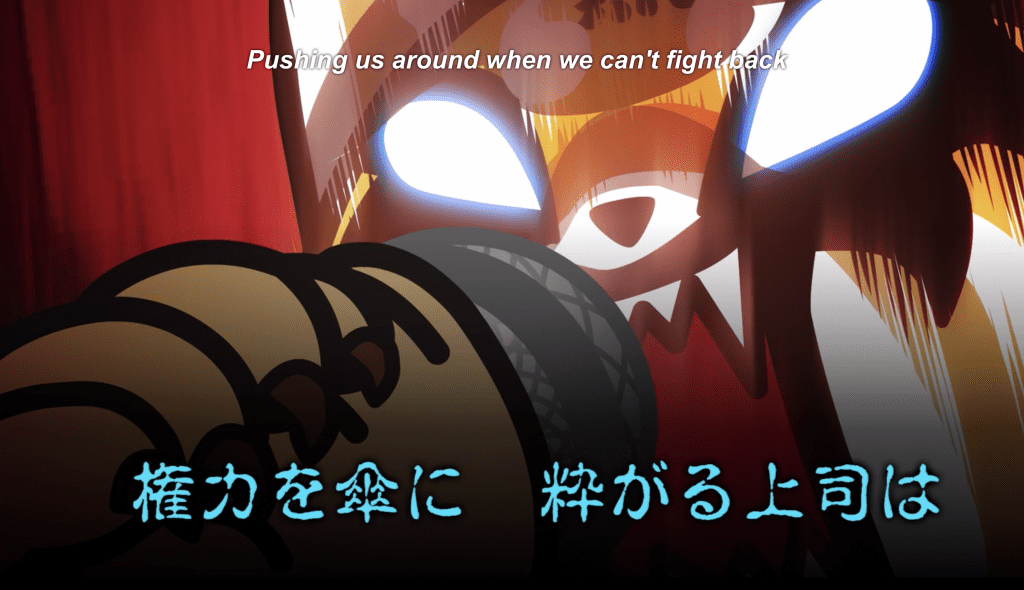 There is more to the story of Aggretsuko / ???????? than a Red Panda being secretly angry at life. Its themes run deeper. Retsuko is portrayed as a belittled woman in the workplace by her manager. The ideology surrounding this theme, that everyone must comply due to his power, is one of the stronger messages. If you work in a corporate environment, you will feel a relation to some of the scenarios that occur between the manager and Retsuko. If anything, with the recent Hollywood scandal, this highly political anime is an opportune time to relay its messages, as it shows this type of behaviour is systematic in many difference workplaces, not just in the audition rooms.

Body image and the expectations of a woman is where ultimately the story leads, as Retsuko pressures herself to become a wife. She does not want a job and believes the essence of marriage will save her. In doing so, Retsuko worries about getting the body she thinks she needs to allow men to lust for her. It’s glaringly obvious what the story is trying to tell us and it is wonderful to see the messages told in such an unprecedented way. For some reason, the issues portrayed felt easier to understand in this context and when Retsuko resorts to the karaoke booth everytime she reaches her peak, you feel it. In fact, you can almost sense the anger seeping out of her.

Aggretsuko / ???????? is a fine achievement if anything. The creators must be applauded for its daring nature to immerse all the stereotypes and political messages into a single anime series. It does not overcomplicate matters, Retsuko makes irrational decisions and her peers each represent an amusing stereotype, whether that be the animal they are or how they act; the naive male co-worker, the social media obsessive, the suck-up, and of course the sexist manager, which funnily enough is a pig. The animation itself will not blow you away with colour palettes dashing across the screen, but equally, it is enough to entertain with the obvious brightness to it. 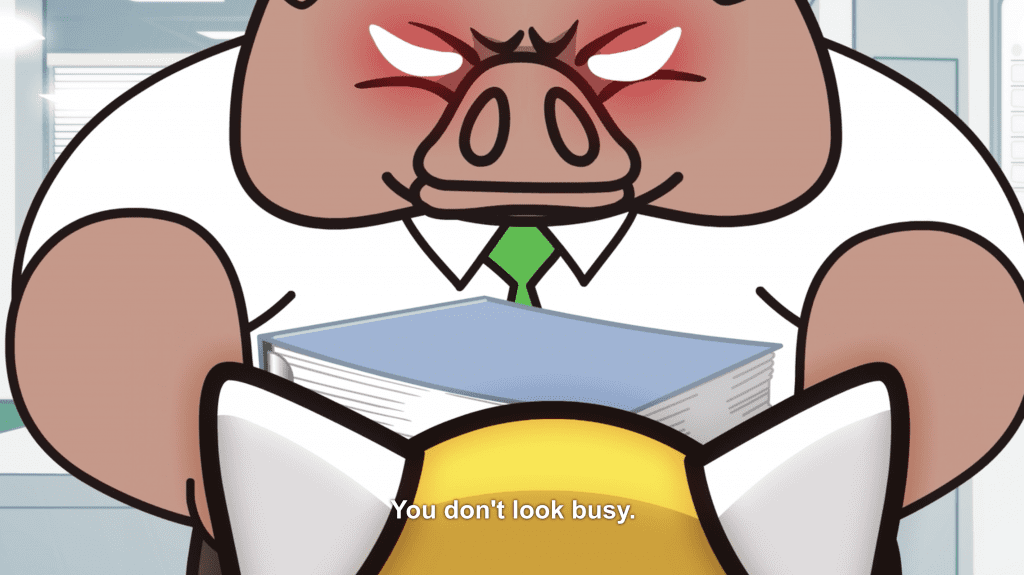 Netflix anime series Aggretsuko / ???????? is bright, fun, colourful and daring, and you would have to be really miserable not to enjoy it. The story is slightly repetitive but it can be forgiven slightly by its nature to relay as many messages as possible that showcase the issues in our society. If you are an adult in your 20s, this anime series will have more of an impact than just a cute story about a talking death-metal-singing Red Panda. I think you will appreciate the messages brought forth. If you are a woman, you will be happy that someone has proudly put these messages together in such a passionate way in the form of an anime.

Its final message is that life does suck. After you have watched this you may head to a karaoke bar and smash out some lyrics, or smash up your office desk. The choice is yours.