A young 14-year old boy is struggling with his identity and religion and embarks on his own inner fantasy to discover his true self in the depths of the inner city.

A young 14-year old boy is struggling with his identity and religion and embarks on his own inner fantasy to discover his true self in the depths of the inner city.

I’ll be honest. When Ulysses begins to courageously dance and sing with his bullying peers in the locker room, I genuinely felt like I had an out of body experience and entered some kind of incongruous universe. You can easily be embarrassed by not researching the genre. For Saturday Church, I clearly didn’t.

The comparisons to the phenomenal Moonlightareobvious from the start; Saturday Church hones in on that unspoken suppression from the outset as the leading male character copes with life rather than living with it. Its similarities can be applauded or rejected but it is not a mirror of the former movie.

Ulysses understands early on what world he needs to be a part of. Saturday Church provides surroundings that are there to hurt rather than support. The opening deals with a loss; his father’s death who he clearly loved but selfishly means his self-discovery needs to be put on hold. The movie tests the character’s resolve, having to deal with a mother who now needs two jobs and an extremist traditional Aunt that will beat the life out of him if he does not start “acting like a man”. Those four words are the turning point of the film that is split into two themes; expression and acceptance.

Saturday Church deals with expression in a limited form as Ulysses has to deal with ways of expressing his true identity. His sexuality and desires are boxed into his mind as he pretends to sing and dance with his peers. Unfortunately, I did not warm to his coping mechanism until near the end of the movie. I felt that the pop singing was out of sync with the flow of the movie and at times halted the momentum of the story. The power of Moonlight is that it does not need to shout the problem; the characters and the environment dealt with that presentation. Saturday Church wants to be louder with its subject but I felt it did not need to be. 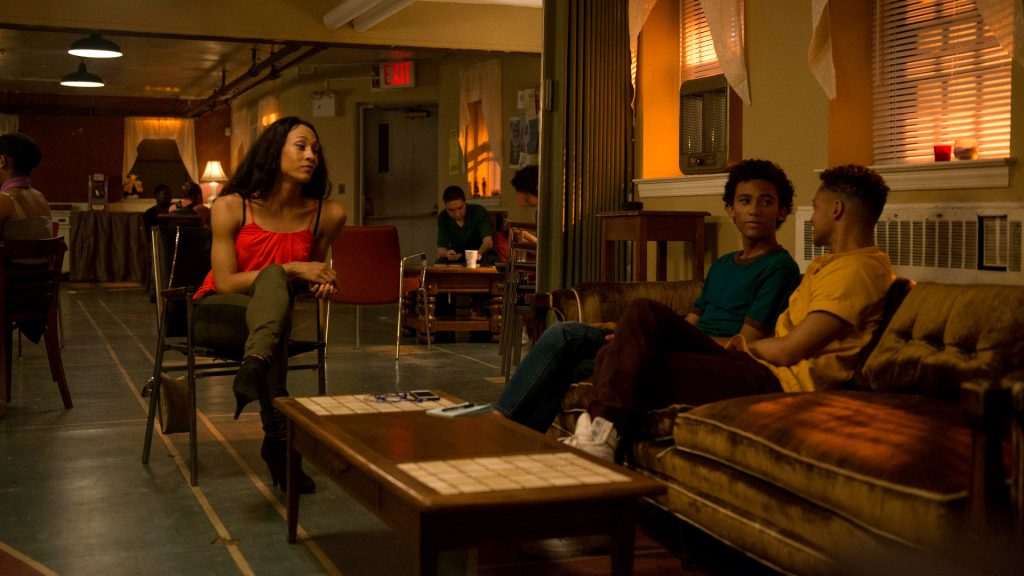 Acceptance comes in the form of the underground vibrant LGBTQ group Ulysses begins to attend. I think it is worth stating that Q, in the case of this story, means Questioning. I think questioning who Ulysses is serves the entire point of the movie – he does not know his identity and yearns to understand what it is. Moments, where he wears his mother’s heels to be caught by his misunderstanding brother, are scenes that make you uncomfortable as you so desperately want him to be happy. When he is finally amongst people who are in the same personal situation than him, you finally relax and that is when Saturday Church becomes a movie about finding one’s self.

Saturday Church does not reach the heights of Moonlight but its one to be observed. A terrific leading performance from Luka Kain is one of the reasons why you are allowed to enjoy this film as he drives the cheerless story to one of hope. In its short running time, I wish they cut down on the musical numbers as I do not believe the movie needed it, however, Saturday Church is a movie that director Damon Cardasis can be proud of.