In this week’s episode of Fear the Walking Dead, Morgan develops a relationship with Nick as the group set out to salvage their ride, and a major character death sets the show’s latest season off to a ballsy start.

In this week’s episode of Fear the Walking Dead, Morgan develops a relationship with Nick as the group set out to salvage their ride, and a major character death sets the show’s latest season off to a ballsy start.

Besides delivering a degree of emotional trauma that I wasn’t entirely prepared for at 6am on a Monday morning, Good Out Here, this week’s episode of Fear the Walking Dead, also made me wonder about something. Does death have to matter?

I don’t mean in life. I mean in entertainment. Characters in TV shows have always been killed off, sometimes without much warning or point. But I don’t recall it ever being a trend until the last few years. You can trace the genesis of it back to the “Red Wedding” in Game of Thrones, the Patient Zero of cast-culling a*s-pulls. I remember the reactions on social media immediately afterwards; it was the biggest news in the world, for days, even though at roughly the same time there had been a mass shooting, unprecedented flooding in Canada, and the whistle-blown news that the NSA were probably reading your emails.

Not all TV shows are Game of Thrones, as much as they might like to be. That moment was plucked from George R. R. Martin’s overwrought source material, and wasn’t dreamed up to salvage dwindling ratings. But what showrunners took from it creatively was that killing off major fan-favourite characters doesn’t have to be the death knell for a story. You can take all that trending outrage and alchemise it into viewership. Death doesn’t have to matter.

Nick’s death in Good Out Here reminded me of that. It also reminded me of the pointlessness of Glenn and Carl’s deaths in The Walking Dead, which was one of the shows which ran with the idea that the best way to keep people watching is to murder the folks they’re tuning in to see. It didn’t work there; in part because The Walking Dead was already a terrible mess by that point, and also because, unlike Game of Thrones, there wasn’t a pre-written template for where the story might go in their absence. 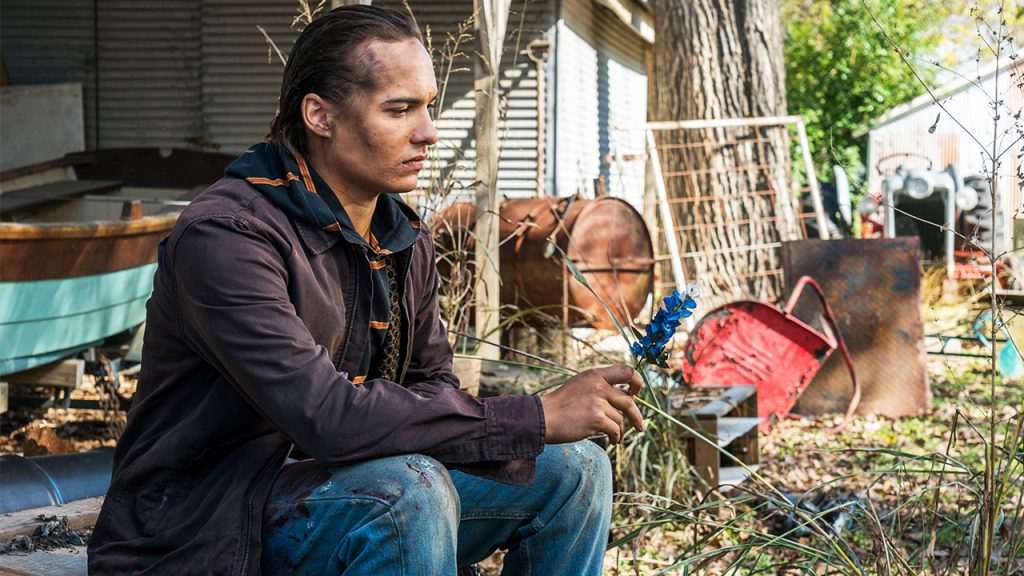 It remains to be seen whether it’ll work in Fear the Walking Dead. I hope it does. The show unexpectedly killed Travis at the beginning of its third season, just as he was embracing a newer and more compelling worldview, and the repercussions of his demise opened up a lot of plotlines and characterisations. In a sense, he needed to die – we just didn’t know it until he was gone.

I’m sceptical about whether we can apply that logic to Nick. He, along with Queen Hotness Alicia, has been one of Fear the Walking Dead‘s best characters since its inception, and it can’t be said that he’d reached the end of his character arc. On the contrary, during his brief relationship with Morgan in Good Out Here, he had been exposed to a point of view that resonated with him; the outsiders, albeit temporarily, had seen themselves reflected in each other.

It took a while to get there. Early in the episode, a scuffle in the SWAT van resulted in it careering through a barrier and into a ditch. Althea handcuffed Nick to the wreckage and left him in the hobbled company of Morgan, while everyone else set out to find a means of dragging the vehicle free. There was more to the episode, but only just. Al reiterated her desire to document the entire apocalypse. John found some solace in Luciana having left Nick and found her way back to him; in the idea that you can leave someone you love for the right reasons. He was thinking, I assume, about Laura, his own missing love.

But, really, Good Out Here was about Morgan and Nick. They started to develop a relationship over peanut butter protein bars. Nick asked Morgan about that tiny book he reads, and watched the video Althea made of him explaining why he ran from Virginia. Morgan, in turn, followed Nick when he escaped, and saved him from a group of walkers. Don’t ask how he caught up on that ruined leg. Ask, instead, why Nick is so incensed by that blue El Camino. 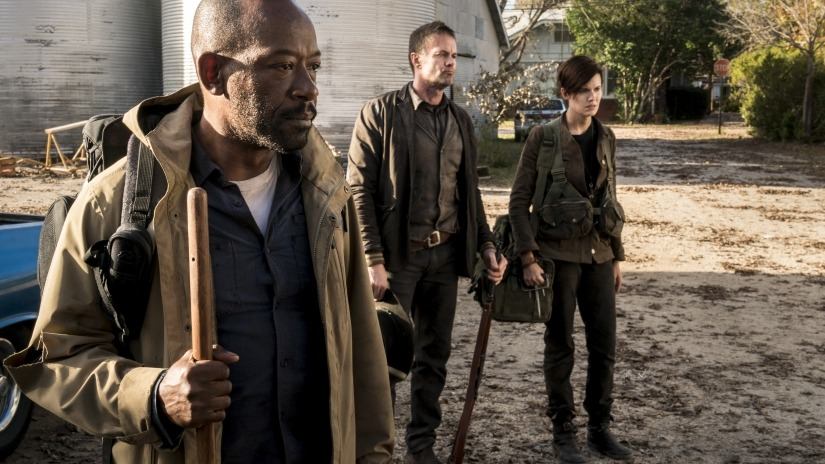 Good Out Here told us some things about the car’s driver. He’s the (presumably self-appointed) guardian of Charlie, the Vulture spy we met last episode. (Fun fact: the actress who plays her retweeted last week’s recap, in which I called her a turnip-ruining little snitch. She didn’t follow me.) Intermittent flashbacks suggested that Nick hates this guy, but there was more to the story. Other flashbacks saw Nick scavenging alongside Madison, and their efforts being undercut by El Camino Guy, but even that doesn’t explain it. Nick really wanted to kill this dude. And by the end of the episode, against Morgan’s sage advice that it wouldn’t work out the way he thought, he killed him.

In retaliation, Charlie killed Nick. I guess Morgan was right after all.

But, again, does death have to matter? Not in the way you think. Consider Morgan. Towards the end of the episode, he had finally opened up to someone. He had given Nick his tiny book, The Art of Peace, and had told him they could talk. About anything. And then Nick was dead. I lose people, and then I lose myself.

Consider Madison. She might be dead too. This episode certainly seemed to suggest she was; the symbolism of the blue flowers, and of Nick’s fear that leaving the diamond brings him closer to the outside world that he’s willing to get, both suggested that what they were doing, out there in the wasteland, wouldn’t work out well for them. It didn’t for Nick. But was he set on that thankless path because it didn’t work out for his mother, either?

We don’t know. And it’s testament to the quality of Fear the Walking Dead that we’re left wondering – that, not for the first time this season, we were tricked. I’m not mad about it. Why would I be? Fear the Walking Dead is a show about death. It’s only right that maybe it can make it matter after all.