A celebratory exploration of one of pro wrestling’s biggest ever stars, Andre the Giant is confident and impactful filmmaking that isn’t afraid to highlight the drawbacks of being an icon.

A celebratory exploration of one of pro wrestling’s biggest ever stars, Andre the Giant is confident and impactful filmmaking that isn’t afraid to highlight the drawbacks of being an icon.

André René Roussimoff, often known as Andre the Giant, was the son of farmers living 40 miles outside of Paris. In the world of professional wrestling, which he helped to morph from a regional business to a national and cultural phenomenon, he was billed as being 7-foot-4 and weighing 500 pounds, which might very well be accurate. Other playful nicknames for him included an Alpine lumberjack character known alternately as “Jean Ferré” or “Géant Ferré”, and “The 8th Wonder of the World”, which indeed he was, for many reasons, not least of which that historically he was the first and only reasonably polite Frenchman.

I kid, of course – he was often very unpleasant. Not that you can blame him. Jason Hehir’s HBO documentary is largely about the physical and mental toll being a giant – much a less a famous one – took on Andre during the then-WWF’s 80s popularity boom. In 1993, at age 46, after enduring a lifetime of ridicule and fascination and inconvenience in a world he was built too large to properly inhabit, his heart gave out and he died alone in a hotel bed. 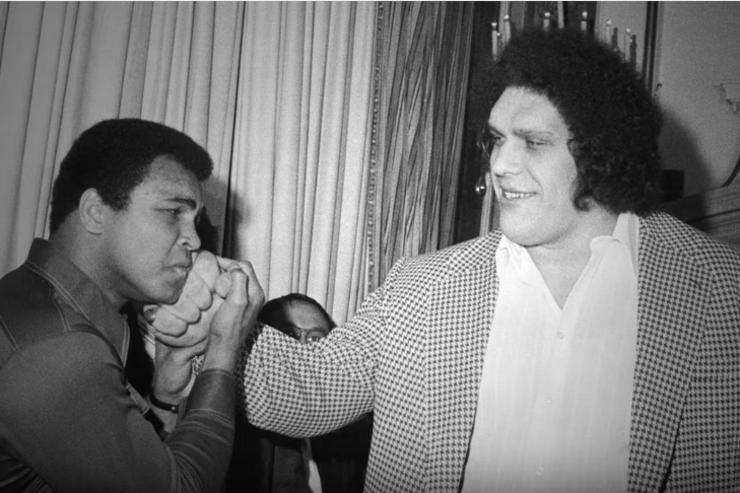 Still, though, Andre the Giant isn’t a maudlin film. It’s much more of a celebration, largely putting Andre back into the context of pro-wrestling, a business he implicitly understood and helped to define, and where he still remains one of the most vaunted “attractions” – to use Vince McMahon’s typically showbiz terminology – in the sport’s long and storied history. So, after a brief description of his boyhood, we enter the ring with Andre and only scarcely leave it again.

Andre the Giant was discovered in the 1960s, and as a scrawny kid still weighed about 300 pounds. He made his way around the world, his reputation and (inexplicably) his physique continuing to expand. He worked as a rotating guest attraction, baffling audiences with his unique appearance and then moving onto the next city, the next crowd, until he worked his way from Europe to Canada and, eventually, to America. Andre was a step ahead of the game, which at the time was a feudal land of regional circuits, each with their own promoters, stars and audiences. Andre was a deft hand at working the local press, allowing the story of his wrestling career to become one of human interest; this huge, abnormal man, excitedly showing off his ginormous hands, which he would often wrap around a reporter’s entire face like one of those crab things from Alien. 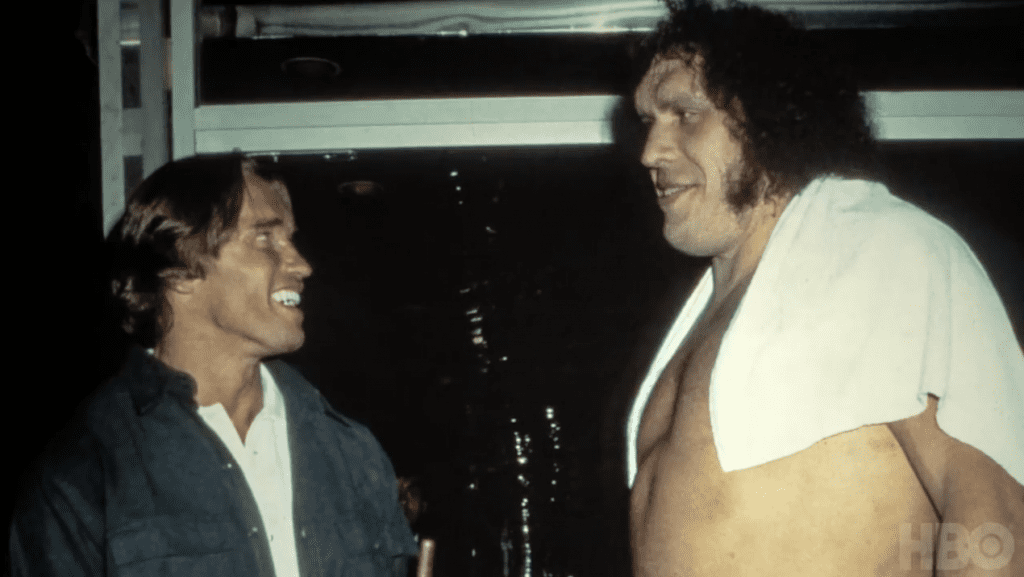 There was a period of time when Andre the Giant was arguably the most famous man in the world, known to everyone, even those who had no interest in the sport he competed in. To cultivate that kind of global presence in a time before internet-driven media is testament to his lovable, burly appeal, and the sheer impact of the giant Frenchman’s presence. Wrestling historian David Shoemaker, who shows up several times throughout Andre the Giant, describes it as a special effect before the age of CGI. To see Andre in person was almost inconceivable, even for people who knew him and saw him regularly. He was a character sprung from the pages of folklore – Goliath given flesh, and disappointingly a French accent.

Shoemaker is among an impressive list of interviewees, including “The Nature Boy” Ric Flair, Jerry “The King” Lawler, “Mean” Gene Okerlund, and most prominently Hulk Hogan, the blonde-haired, baby-oiled Muscle Beach man-mountain who became a national hero largely on the strength of Andre’s reputation. During a period when Vince McMahon was essentially conquering and subsuming every smaller-scale promotion in the country, styling himself as a kind of de facto pro-wrestling despot, the Hulkster starred in Rocky III as a wrestler called Thunderlips. It was quite a thing to see Hogan towering over Sylvester Stallone in that film, but quite another to see the same effect transplanted back into pro-wrestling, but in reverse. Hogan himself was 6-foot-7 and upward of 300 pounds; Andre make him look tiny. 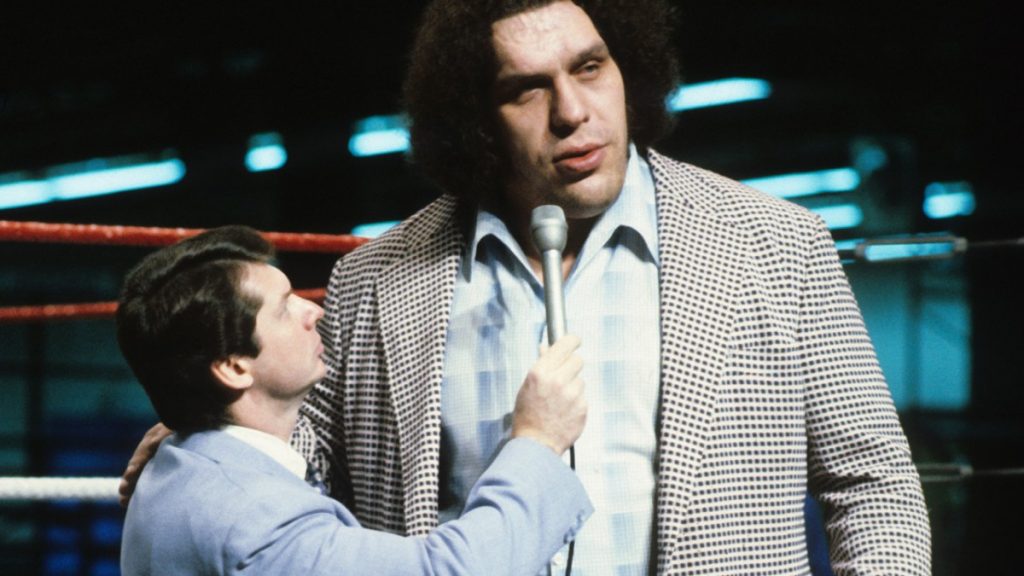 This is, of course, all building towards the most iconic moment both of the documentary, Andre’s own career and, in many ways, pro-wrestling itself. Andre, so fraught with injuries that he was barely able to work a match, turned “heel” – pro-wrestling parlance for becoming a villain – in order to “put over” – pro-wrestling parlance for making someone look good at your expense – Hogan, who was to inherit Andre’s role as the promotion’s biggest star. Their titanic tussle eventually took place at WrestleMania III, and was scripted beat-for-beat until the very end, where Hogan was repeatedly told he would win by everyone other than Andre, who tortured him until the dying moments of the match itself, when he called the iconic slam and leg-drop spots that would bring his 15-year unbeaten streak – and, essentially, his career – to a fitting end.

It’s an amazing moment, in no small part thanks to having Hogan himself narrate in such an incredulous way, which is a strength of Hehir’s documentary. Later, while explaining the kindness of Andre, the simple good in his spirit, even the notoriously no-nonsense Vince McMahon is brought to tears.

It works because Hehir covers not just the awesomeness of being Andre the Giant, but the inconvenience of it; how he refused treatments for his acromegaly to preserve his popularity and image, how he couldn’t ever use an airplane bathroom despite spending a huge portion of his life travelling, how he couldn’t just sit in a normal chair or sleep in a normal bed. It’s all interspersed with glorious tales about his legendary drinking and farting and womanising, which is clever, but his suffering is always on the periphery. He spent his final years in excruciating pain, and died alone. It’s a sad story. But in the process he became one of the most impressive and beloved human beings who ever lived – a true one-of-a-kind performer, a man born to do one thing and one thing only, and spent his life doing it well. Few men before or since have sacrificed more on the altar of sports-entertainment than Andre the Giant.

Today, in the memories and hearts and minds of those who saw him when he was alive or came to know him after his death, he’s perhaps bigger than he’s ever been before.