Despite a few glimmers of the old show’s quality, in “Buried”, Fear the Walking Dead continues to head in a worryingly familiar direction.

Despite a few glimmers of the old show’s quality, in “Buried”, Fear the Walking Dead continues to head in a worryingly familiar direction.


After last week’s ballsy decision to kill off one of the show’s long-time fan-favourite characters, I started to worry about Fear the Walking Dead. Even when the news broke shortly afterwards that Frank Dillane had requested Nick’s death as early as last season, I continued to ponder the show’s new direction. And because my heart is a dried up rotten grape of cynicism, I assumed it was the wrong one. Unfortunately, Episode 4, “Buried”, suggests that I was probably right.

And it wasn’t even a bad episode. It retained this season’s usual style of interspersing the heroes’ present-day road trip with flashbacks to the Diamond’s conflict with the Vultures. In “Buried”, Althea pushes Alicia, Luciana and Strand to recount their story of the day everything went wrong; the “twist” being that it was the day they all decided to stay there.

This is all well and good. We get to see more of Nick, and I don’t just mean in the opening scene, when Luciana stabs his corpse through the temple, which in this universe is a moving eulogy. But I like how the recollections take place at a remove, filtered through that unflattering low-quality handy-cam. Plus the proper flashbacks, which detail the events at the Diamond, still retain that sun-drenched visual style of seasons past, when Fear the Walking Dead was a distinct show, narratively and visually, and didn’t just feel like a fast-necrotising husk of its big brother, which in a lot of ways it’s becoming.

“Buried” was largely a filler episode, one of those stage-setting hours that you get a lot in the wake of a major character death, so there isn’t much point of me detailing the ins and outs. We still don’t know if Madison is alive. There were two really clever zombie set-pieces, one in a garden centre where the walkers were all studded with cactus spines, and another at a theme park which involved a really quite brilliant water-slide gimmick. Both proved that Fear the Walking Dead remains a more engaging and inventive show than The Walking Dead, which is admittedly a bit like being a better juggler than a man with no arms. 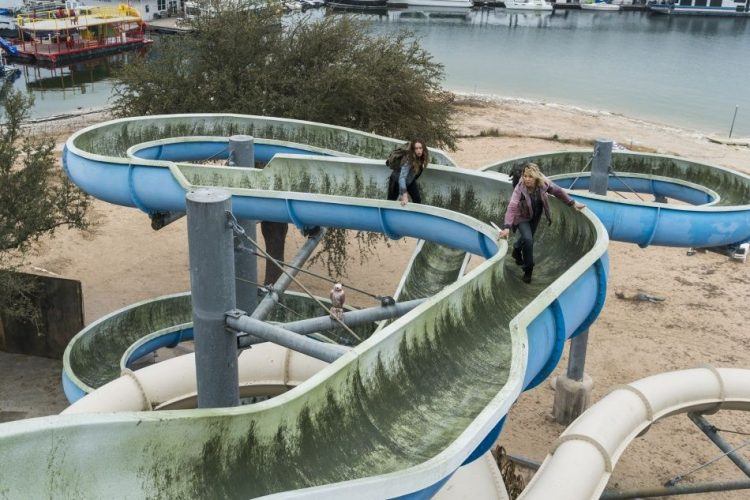 Still, stop me if any of this sounds somewhat familiar. We have two groups of survivors, ideologically opposed, one trying to live peacefully – these are the heroes – and one trying to dominate through force. The forceful group has a leader, and the leader is prone to monologues, and the peaceful group has a member that everyone loves who ends up getting killed in typically tragic circumstances. Thus, our heroes abandon peace, concluding that is doesn’t work, and they dig up a stash of automatic weaponry and set out on a presumably fruitless mission of revenge. That’s how “Buried” ended, with Strand assuring us that our heroes “know where they meet up next.” Locked, loaded, and ready to ruin a perfectly good show.

Perhaps I’m being hyperbolic. But after having suffered through eight seasons of The Walking Dead making the exact same idiotic decisions and gradually morphing from a thoughtful character-driven drama to an utterly embarrassing shambles, no pun intended, the sense of déjà vu here was so overwhelming that I couldn’t ignore it.

It’s still better-shot and better-written and better-acted and, most importantly, better-paced. It took The Walking Dead two meandering seasons to reach “All Out War”, to use the show’s own silly terminology, and we’ve got our battle lines drawn here in just four episodes. My question is simply this: Why? 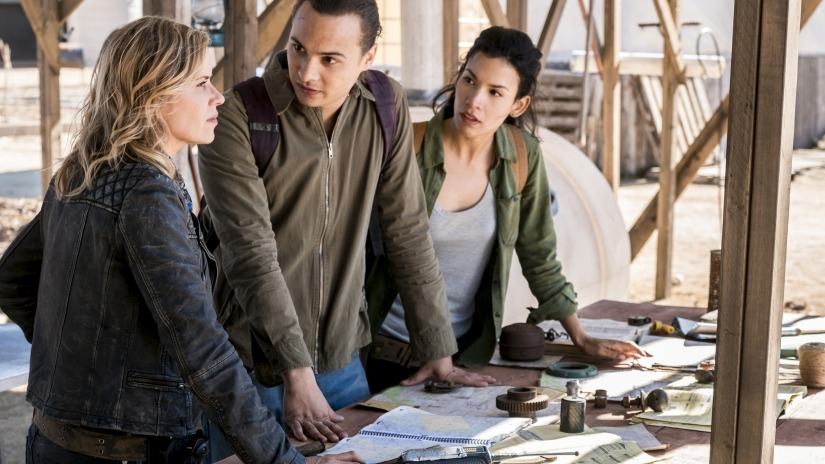 Why are we doing this again? Why do the showrunners – including now, it should be said, Scott Gimple – think that anyone has any interest in seeing this nonsense repeated? Especially, let’s not forget, in a show that established a reputation and an enthusiastic fanbase almost entirely by virtue of not repeating the same blunders; of taking the worn-out premise in a newer, more interesting direction.

I hope I’m wrong. I have been before. Given the dual timelines and the show’s general above-average quality, it’s not unreasonable to assume that it won’t pan out exactly as I expect, even if all the signs seem to point in the same, tired direction. At least Morgan is there. While he eventually came to feel wasted in The Walking Dead, here he feels vital; like the audience surrogate who has seen it all go wrong before. When he reminds Alicia, Strand and Luciana to bury Nick, it feels like he’s reminding the whole show to be better.

But then there’s the matter of John Dorie, who discovered in the climax of “Buried” that his missing love, Laura, is actually Naomi (Jenna Elfman), who we’ve seen during the flashbacks to the Diamond. Aha, I thought. An interesting narrative wrinkle. Well done, Fear the Walking Dead. I knew you wouldn’t let me down yet.

According to Alicia, she’s dead.