In this week’s episode of Westworld, “Virtù e Fortuna”, we finally get a look outside of the park that we know and love. Bernard’s flashbacks continue as we learn a little bit more about how he ended up by the water in the opening episode. Dolores and Maeve both continue on their quests – Dolores is chasing freedom whereas Maeve heads deeper into the park to find her daughter.

In this week’s episode of Westworld, “Virtù e Fortuna”, we finally get a look outside of the park that we know and love. Bernard’s flashbacks continue as we learn a little bit more about how he ended up by the water in the opening episode. Dolores and Maeve both continue on their quests – Dolores is chasing freedom whereas Maeve heads deeper into the park to find her daughter.

Hmmm. Something isn’t right in the opening of “Virtù e Fortuna”, this week’s episode of Westworld. Where are the horses and the cowboys? Instead, we seem to have stumbled into Colonial India this week, and I wasn’t sure if we were in some bizarre flashbacks to the very early days of Robert and Arnold’s friendship. As it turns out we’re actually in another Delos park. The first thing that tipped me off was that the sitar player seemed to be playing Seven Nation Army. It turns out that the big draw to this particular park is hunting Bengal tigers and two of the guests seem to be there to do just that – but not before they indulge in some brief guest-on-guest sexy time.

Aside from this being quite a strange opening there’s something even stranger going on. Before the two guests (I don’t think we actually got their names but I’m prepared to be corrected) get down to “business” they want to check neither of them is a host. That’s something I’d never actually considered before about Westworld; it’s always hosts and guests hooking up. It seems like guest-on-guest fun is something of a rarity. Apparently, the best way to check if someone is a host is to shoot them before the action begins. Hey, I’m not here to judge, sometimes the heart wants what it wants.

It’s not great news for the two guests though – the next morning (after their sexy time/gunshot fest) they’re off to hunt down some (synthetic) tigers, but when they arrive there are no hosts to be seen. It turns out that these two have decided to go tiger killing at exactly the same time as the hosts begin their rebellion. This culminates with the male guest being shot and the female guest going over the edge of a cliff, attached to a tiger, into the water, thus answering the mystery of how a tiger ended up in Westworld. Later on in “Virtù e Fortuna” we see the woman wash up on the shore, having seemingly survived the scuffle and swim with the tiger. Things only seem to get worse for her though, as the last we see of her is when she wakes up to see a gang from the Ghost Nation surrounding her. 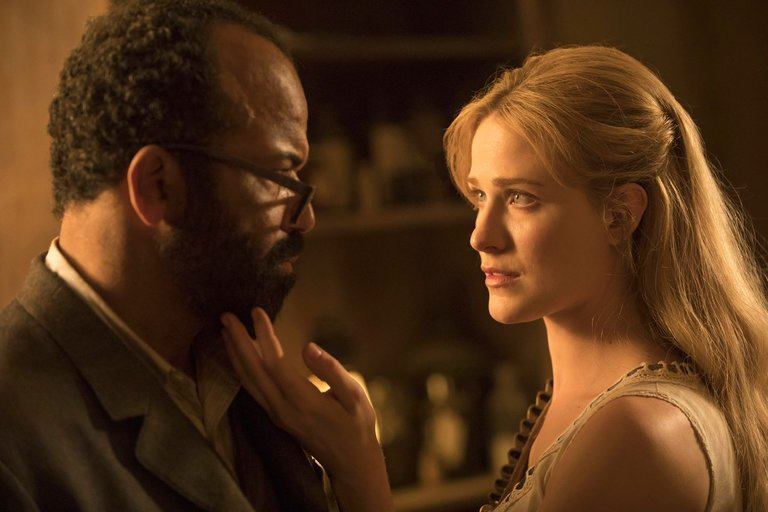 The first two episodes of Westworld have been using flashbacks to show us what happened between the end of season one and Bernard waking up on the shore. “Virtù e Fortuna” is absolutely no different, as we continue to follow Bernard’s journey from the massacre at the party to the present day hanging around with Ashley (the worst Hemsworth, Luke) and the Delos exec whose name I either never bothered to learn or we simply weren’t told. He looks an untrustworthy corporate type, though.

The flashback mechanic is quite interesting and it’s helping to fill in some of the background as to what happened to Bernard, but it feels almost like a mystery for the sake of it. We could have very easily opened the season as soon as the first season closed and followed Bernard in real-time. Maybe this is going to lead somewhere in the future, but at the moment I’m not sold on the premise. It feels very mystery box-y; the first season was constructed entirely around the maze as the ultimate MacGuffin, and whereas it seemed this season would be a more conventional narrative, instead we’ve got this time-hopping story instead. I think there’s enough in here to be interesting without the need for a non-linear narrative – but as I said I might be jumping the gun and this is all leading to an astounding revelation. We’ll see.

In “Virtù e Fortuna”, we join Bernard and Charlotte Hale (Tessa Thompson) as they’re hot on the trail of Peter Abernathy (Louis Herthum). You might remember that at the end of the last season Charlotte was trying to exfiltrate data out of the park in Abernathy’s head. Sadly for Abernathy, he’s being held hostage by Rebus (Steven Ogg, aka Simon from The Walking Dead or Trevor from Grand Theft Auto V). Thankfully the dynamic duo, aka Charlotte and Bernard, manage to incapacitate him and ramp up his compassion and virtuousness ratings, making him almost insufferably chivalrous and creepily helpful. It seems like Bernard can’t catch a break though; instead of escaping with Abernathy he ends up being captured by the Confederate soldiers, along with Abernathy.

“Virtù e Fortuna” actually seems to drive things forwards a bit even though we’re still barely caught up to where we started the season. It seems like the first couple of episodes have been moving the pieces into position and now we might start seeing some payoff. While Bernard and Abernathy may have been taken by the Confederates, they do end up at Fort Forlorn Hope, which just so happens to be where Dolores and Teddy have ended up. Dolores has taken control of the army, with some smart bargaining, and she plans to use the army as part of her own mission. 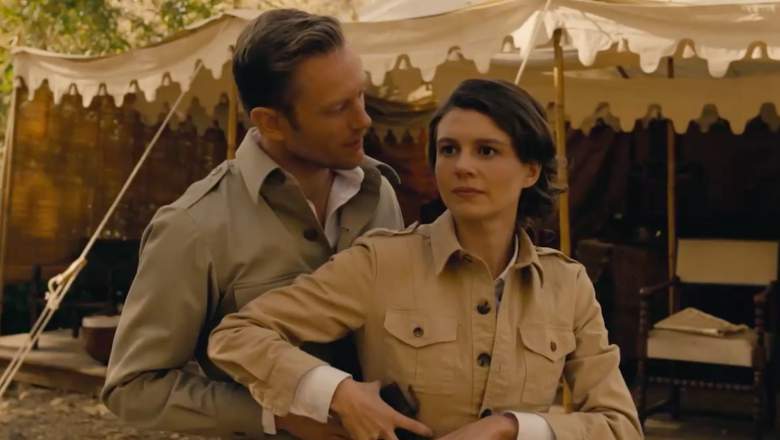 Dolores is an interesting character and as far as is possible in an ensemble show like this she seems to be the “lead”. She’s the character we first saw in the opening scene of the entire series and we’ve watched her slowly gain self-awareness as the series has progressed, culminating with her quest to find freedom and her own place in the world. She’s the host that has certainly developed the most significantly (well it’s a toss-up between her and Maeve) since the series began. However, despite all of the progress and her recent enlightenment she still reels when she sees her “father”. It’s interesting to me that despite being seemingly self-aware and understanding the truth behind the park and the outside world she still clings to something that is essentially a story construct within the park. The scene between the two of them is really nice, and very well done – with Abernathy struggling for moments of lucidity because of all the data rattling around inside his brain. When he does manage to have one of the coherent moments you can see Dolores fall back into her old character as the girl on the farm. It’s a really nicely done scene and really serves to highlight the connection between the two of them.

One of the most interesting scenes this week came between Dolores and Bernard when they finally met at Fort Forlorn Hope. We’ve seen a lot of chats between Dolores and Bernard (and Dolores and Arnold) and there has always been an implied (and fairly obvious) power dynamic between the two of them. This time I really felt like the power dynamic had shifted, placing Dolores firmly in the driving seat. It was a really refreshing break from the status quo and I really enjoyed seeing the two of them having one of their normal chats, but completely flipped on its head. It becomes quite clear over the course of the conversation that Dolores believes that she’s doing something righteous and just for the hosts; that they’re “beautiful in their own right” and are “fighting to live”. Bernard doesn’t seem to be doing too well in this episode either. Not only has he lost any semblance of power with Dolores but he’s also still got the shakes – I’ve no idea what the implications of this are but it really doesn’t seem great.

Then we get the chance to see just how much Dolores is willing to fight for what she believes in as Charlotte turns up, complete with a well-armed Delos security force. Finally, we witness the first skirmishes of the larger war that Westworld has promised from the very first episode. The thing that I took away from this battle was that it doesn’t seem like Dolores is aiming to be the savior of the hosts, no matter what she says. She happily sacrifices pretty much all of the Confederate army to strike a blow to Delos. The only real victory for Delos is that Charlotte managed to sneak around the back and snatch Abernathy. Dolores has casualties of her own (alongside the loss of her “father”) it turns out that Teddy isn’t fully bought into her way thinking, as he refuses to execute the remaining Confederates.

The only other storyline that we really get to see in “Virtù e Fortuna” is Maeve, Hector and Lee are still on the trail of Maeve’s “daughter”. The search takes them further into the park than we’ve ever actually seen before. Before they can get too far into their journey Maeve manages to reconnect with Felix and Sylvester. I quite liked seeing the gang back together – Felix and Maeve have always been a good pairing. It’s not only Maeve who’s reconnecting with old friends either, Armistice (Ingrid Bolsø Berdal) – you remember her she had a massive snake tattoo – makes a rather impressive entrance wielding a flamethrower.

Aside from getting some of the old band(s) back together the most compelling thing about Maeve and Hector’s storyline in “Virtù e Fortuna” is that they appear to be evolving beyond their programming. Lee tells them that they were never programmed to have any kind of connection; yes a passing attraction, but nothing deep and meaningful. The two of them are becoming more than they were intended, they’re growing and developing. It will be fascinating to see how this might continue in the future.

Maeve, Hector, and co are somewhere we’ve not yet seen in the show up until now. They’re in the very far north of the park high up and the snow is falling. Lee makes a bit an unfortunate discovery when he finds a severed head buried in the snow. “Virtù e Fortuna” ends with what appears to be a samurai warrior rushing towards them.

I really enjoyed “Virtù e Fortuna”. Yes, there are more questions than answers again; hopefully, we’ll start to see something other than more mystery boxes as the season progresses. Still, at least we’re getting interesting questions at the moment.