Telling a surprisingly complex and thoughtful story, Kanan: The Last Padawan is one of the better comics in current Star Wars canon, fleshing out the hero of Star Wars Rebels, and the galaxy itself, across six compelling issues.

Telling a surprisingly complex and thoughtful story, Kanan: The Last Padawan is one of the better comics in current Star Wars canon, fleshing out the hero of Star Wars Rebels, and the galaxy itself, across six compelling issues.

KANAN: THE LAST PADAWAN IS PART OF THE CURRENT STAR WARS CANON. CHECK OUT THE TIMELINE.

Before he was the badly-dressed cowboy Jedi in Star Wars Rebels, Kanan Jarrus was a young Padawan by the name of Caleb Dume. In Kanan: The Last Padawan, a six-issue story arc written by Greg Weisman (executive producer on the first season of Rebels) and illustrated by Pepe Larraz, we get to learn how Caleb became Kanan, where he acquired his unique fashion sense, and how he survived Order 66.

Kanan: The Last Padawan is one of the strongest Star Wars comics not featuring Luke Skywalker or Darth Vader, one that adds needed depth to the mythology by rewinding the clock to a period of galactic history – immediately before, during and after Order 66 – which hasn’t been particularly well-documented or fleshed out in current canon. Despite adopting one of the Star Wars Rebels characters as a protagonist, it not only works as background for that show, but a bridge between it and The Clone Wars, and a satisfying standalone tale. 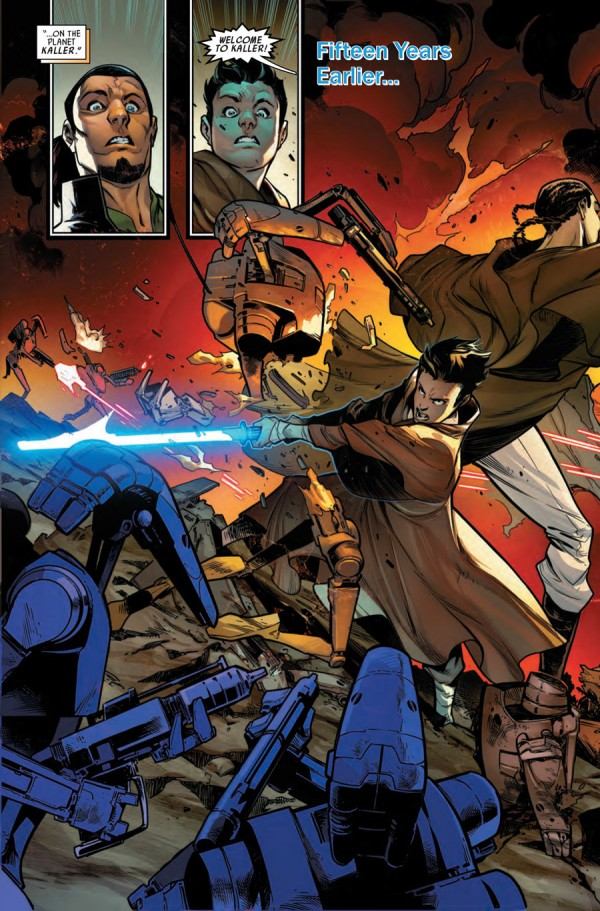 The story begins with Kanan, then Caleb, as the padawan of Jedi Master Depa Billaba, trapped behind enemy lines with a company of personable Clone Troopers who nonetheless turn their blasters on the boy and his master when news comes down the wire of Chancellor Palpatine’s purge. Caleb winds up on his own, living as a dirty street urchin, forced to hide his Jedi identity as he navigates the hostile world of early rule under the new Galactic Empire.

Striking a nice balance between action and slower, more contemplative moments, Kanan: The Last Padawan is at its strongest when it deliberates on the stickier aspects of the Clone Wars conflict. It ably navigates various tones and moods, pondering the war itself and the nature of the Jedi Order, how one might affect the other, and how the war itself upends the lives of those only tangentially connected to it. The blend of humour and po-faced seriousness is well-balanced, as are the deliberations on morality, and how the line between right and wrong, good and evil, isn’t necessarily as clear as either side would like to believe. Filtered through the unique perspective of Caleb, who is oddly comfortable in wartime, these meditations are compelling and multifaceted – surprisingly so, coming from a child. 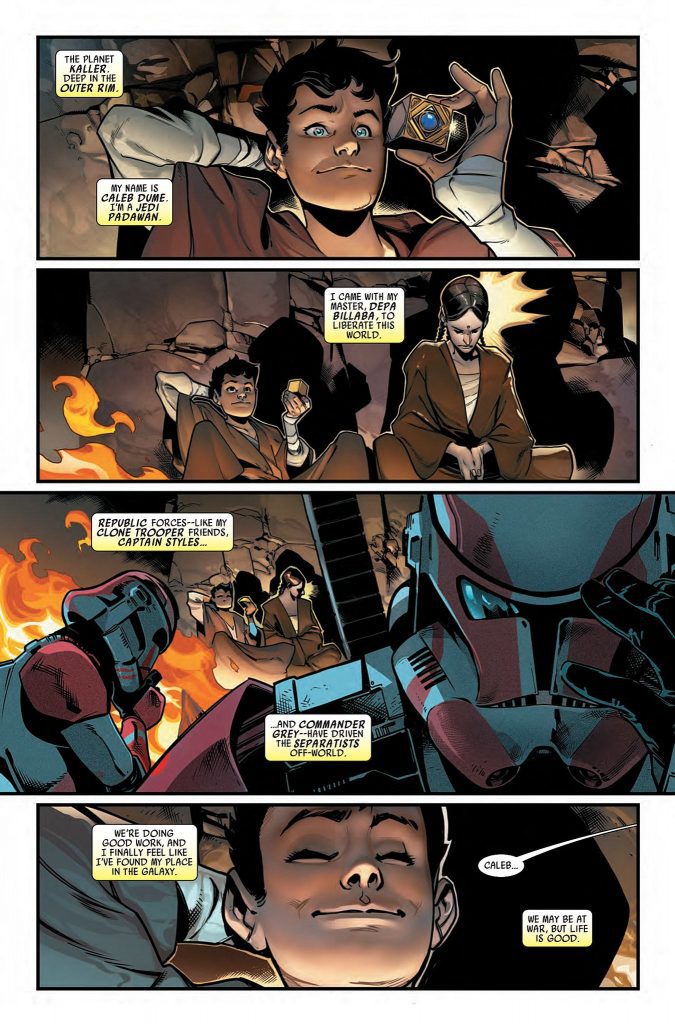 The art pops with David Curiel’s colours, but it also manages to capture the grit of the setting; Caleb’s street life feels grimy and dangerous, and the whole work is reminiscent of the splashy Clone Wars style, but older and dirtier. It’s an odd but compelling effect, especially when it depicts characters from Rebels ­– who are present in a flash-forward framing device – in a slightly off-kilter style. Unique and eye-catching character designs complement the overall aesthetic.

Moreover, Kanan: The Last Padawan feels, if not strictly necessary, at the very least worthwhile; far from a cynical attempt to exploit existing connections with Rebels, the story fleshes out important corners of the Star Wars canon, populating the setting with believable characters who have relatable, meaningful conflicts. It even pays lip service to Obi-Wan’s message warning the Jedi not to return to the Temple on Coruscant, which has long felt like an arbitrary plot point that never really amounted to much. As Caleb evolves into Kanan across the six issues, you’ll find yourself surprisingly tethered to his emotional baggage. I hope he unpacks more of it.