Into the Badlands S3E5 Review

Into the Badlands continues to impress with “Carry Tiger to Mountain”, an episode that was lighter on the show’s trademark action but showed off a great deal of its new focus on character development and worldbuilding.

Into the Badlands continues to impress with “Carry Tiger to Mountain”, an episode that was lighter on the show’s trademark action but showed off a great deal of its new focus on character development and worldbuilding.

For the first time in a while, Into the Badlands wasn’t bookended by action sequences. Sure, true to form, it saved a big, bloody blowout for the episode’s finale, but it says a lot about the show’s continued work on character development and worldbuilding that “Carry Tiger to Mountain” was confident enough to go almost a full hour without any swords being drawn. Also true to form, when the blades came out, it was glorious.

There was a lot going on in “Carry Tiger to Mountain”. After years of imprisonment for freeing his sister’s cogs, Gaius Chau (Lewis Tan) found his way into the boot of the Widow’s car. Turns out they’ve got previous; he wants his sister dead as much as anyone. Steadily, the Widow is accumulating allies. Even Nathaniel Moon is still around after confessing this week that he let Sunny live. What’s important is he got his sword back, and it complements the go-go-gadget hand pretty nicely. 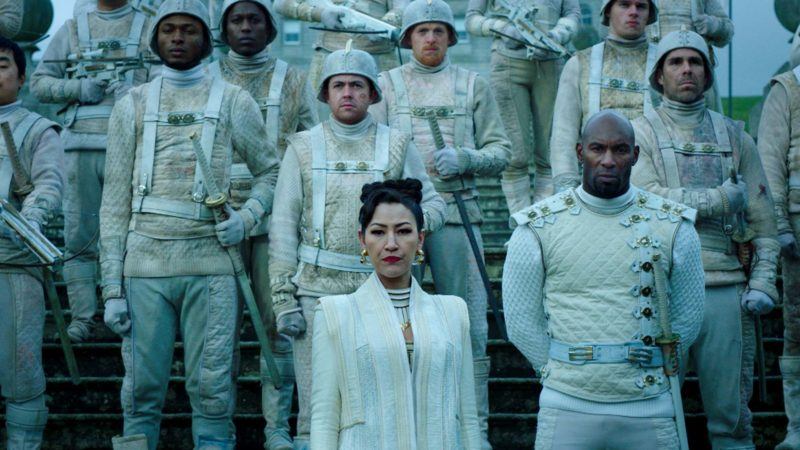 Of course, Baron Chau has allies of her own – although their friendship is tentative, at best. Pilgrim commissions a thousand of her troops for work on a mysterious project that somehow relates to the discovery of Azra; in return, Castor (Dean-Charles Chapman) is despatched by Cressida to aid Chau’s forces in running riot on the refugee camp presided over by Tilda and Odessa. I don’t recall if it was previously established that Odessa is a martial arts badass now, but Odessa is a martial arts badass now, as everyone in this show must be.

Not that martial prowess does many favours for Castor. With his gift threatening to consume him as he loses control of the darkness, he’s lured into what is essentially a suicide mission by a manipulative Cressida, who plays on his jealousy of Nix (Ella-Rae Smith) and M.K. to convince him, essentially, to off himself in service to their noble goal. Needless to say, things don’t go quite that smoothly, and by the end of “Carry Tiger to Mountain” he finds himself a guest of the Widow.

M.K., meanwhile, is a guest of Pilgrim, getting the eyes from Nix and all the right promises from his new host. He’s still well up for killing Sunny, which Pilgrim says he won’t allow, as the Clipper’s fate is inexorably intertwined with that of Pilgrim’s, at least according to Cressida’s hallucinatory artwork. But in the meantime M.K.’s dick-slinging impulses can be directed towards Nix, who showed him pictures this week of the Statue of Liberty and the Great Wall of China; snippets of the old world. “They’re beautiful,” M.K. says, staring straight into Nix’s big, emerald eyes. I know your game, son. 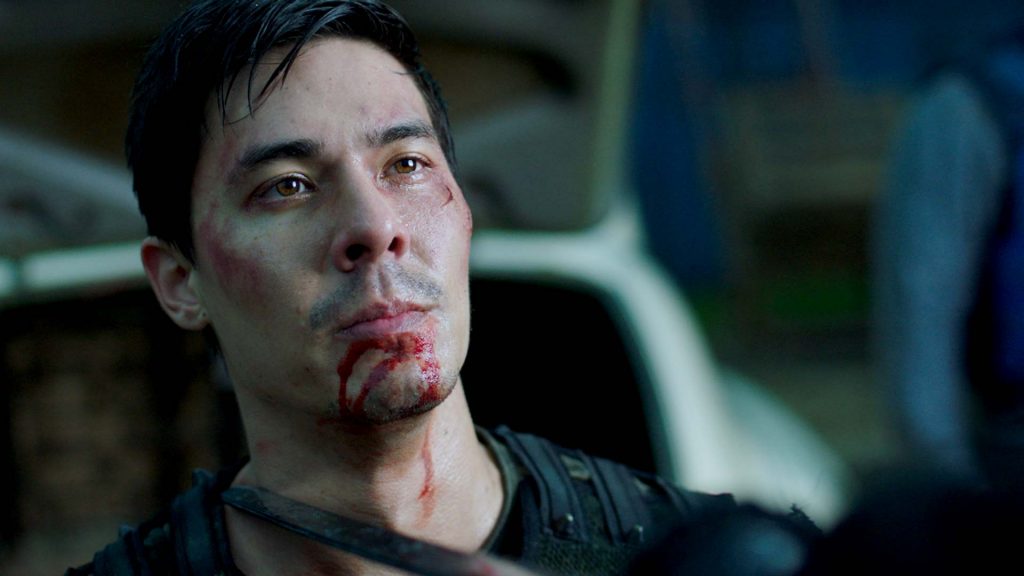 As it turns out, though, Sunny is indeed on his way to Pilgrim. After having journeyed with Bajie into the wintry mountains and solicited the help of a scruffy northern mystic, he’s able to stave off Henry’s encroaching darkness through a rather intense magical baptism. It’s temporary, though, so their next stop is Pilgrim’s house, where I’m sure they’ll become firm friends. Or, you know, kill each other.

If it wasn’t as action-packed as usual, “Carry Tiger to Mountain” displayed the narrative deftness that is coming to define this third season of Into the Badlands. It’s juggling a lot of moving parts and morally fluid characterisation, and it remains as infinitely stylish and watchable as ever. It still isn’t clear exactly who will ally with whom as the stakes continue to be raised, but one thing’s for certain: I’ll be there to see it.