Legion Season 2 Episode 8, “Chapter 16”, finally pairs off the ensemble in interesting ways and starts to make some progress in the search for Farouk’s body, but is it too little too late?

Legion Season 2 Episode 8, “Chapter 16”, finally pairs off the ensemble in interesting ways and starts to make some progress in the search for Farouk’s body, but is it too little too late?

After eight episodes of searching for Amahl Farouk’s body, Legion Season 2 is like a dog chasing a car; I’m not sure it knows what it would do if managed to catch up. I suspect I probably won’t care either way. Legion Season 2 Episode 8: Chapter 16 wasn’t quite as meandering and pointless as last week’s offering, and it did what I wanted by lending some time to more of the ensemble, but the discovery of the Shadow King’s body has taken so long that it isn’t even an engaging plot point anymore – it’s just tedious.

At least, in his mission to find the thing, David is tightrope-walking a thin moral line by stealthily depositing psychic suggestions in the minds of his pals. It actually helps that the whole thing’s pointless, as despite his attempts not to tip off Farouk, the Shadow King has discovered the location for himself, so David’s efforts are nothing more than a profound invasion of his friends’ trust and privacy.

The extent of David’s powers is a recurring theme in Legion Season 2 Episode 8, and it’s also explored in the best scene of “Chapter 16”, in which Syd opens up to Clark about how her feelings for David have developed – and not entirely in positive ways. It’s an interesting pairing, and it makes sense given the sticky love triangle between David and both versions of Syd. After their whirlwind Summerland romance, when things were simpler and the show actually churned through some plot, you can appreciate that it’s difficult for Syd to see their relationship in quite the same way. Especially since, as she tries to carefully explain and as “Chapter 16” indicates, David’s understanding of what’s right and wrong, not to mention what’s real and what isn’t, is nebulous at best. 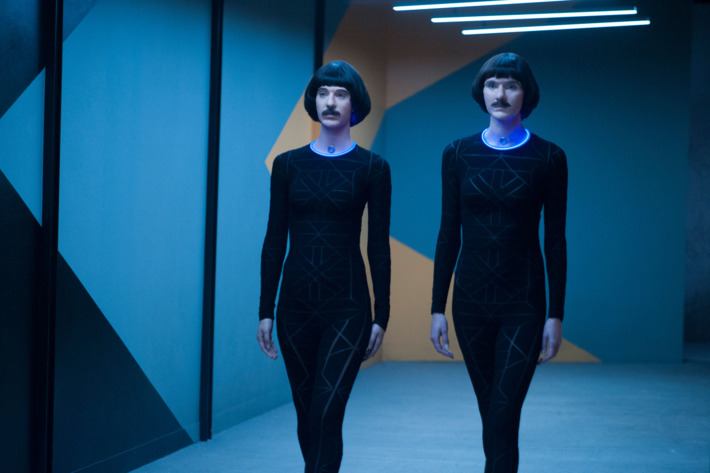 Understandable, too, is Clark’s worry about what might happen if you dump a mutant who is powerful enough to destroy the world; an especially timely anxiety given that young men continue to shoot up schools when young girls don’t reciprocate their advances. It’s subtext for the episode that gets more obvious and less effective when “Chapter 16” tries to weave it into another of those godforsaken Jon Hamm-narrated interludes, this one involving an allegory about perception and reality that makes a thin case against modern technology and communication. I really wish Legion Season 2 would do away with those things, as they’re always the greatest indicator that the show isn’t half as clever as it thinks it is.

That isn’t to say that the abandonment of connection and, by extension, empathy, doesn’t have some kind of relationship to Legion, especially given that the show frequently navigates the fault lines of David’s fractured consciousness. But the philosophical musings never seem to be properly woven into what’s happening on-screen; they’re superfluous padding in episodes that, largely, serve no greater purpose than giving the characters something – anything, really – to actually talk about.

Another recurring idea is that of people being stripped of their agency and reduced to pawns, here communicated by Melanie, who has done nothing for a while and continues to do very little in Season 2 Episode 8, although “Chapter 16” does provide the hazy justification that her mind has been taken over by Oliver and Farouk. I mean, yeah, if you say so. Still seems like a waste to me.

Elsewhere, Ptonomy explores the past of Admiral Fukiyama through Division 3’s mainframe, which at least suggests the season’s finale might incorporate his psychic immunity, and were I optimistic about things you could consider Melanie’s mind-control – and her eerie, monstrous visions – as likely to matter in the final three episodes, too. I just wish I was more interested in finding out.