A shoddy b-movie with no original ideas of its own, Future World is a showcase for the uncanny ability to overact possessed by James Franco, who stars in and co-directs this aimless post-apocalyptic adventure.

A shoddy b-movie with no original ideas of its own, Future World is a showcase for the uncanny ability to overact possessed by James Franco, who stars in and co-directs this aimless post-apocalyptic adventure.

The future, once again, isn’t looking too good. Humankind has, once again, been all but wiped out by a nebulous plague, leaving behind only violent gangs of hooligans and self-styled kingpins who hope to rule the desolate wilderness. One of those kingpins is Snoop Dogg, for what that’s worth. Such is the world of the future we find in Future World, the new Mad Max knockoff co-directed by and starring James Franco.

Franco might seem an odd choice to direct an action and sci-fi hybrid set in a post-apocalyptic USA, especially after having taken great care to adapt the novels of William Faulkner and, more recently, to mimic the neuroses of legendary maniac Tommy Wiseau, who he played in last year’s The Disaster Artist. Maybe the allegations of sexual misconduct cancel out the Golden Globe he won for that performance; either way, I can’t say his turn here as a yellow-toothed murderous psychopath who calls himself War Lord and women “bitches” is going to do him many favours, especially not when he reprograms a spicy robot, Ash (Suki Waterhouse), to be his personal slave.

When in Rome, I suppose. In Future World, robots and artificial intelligences were heralded as “synthetic messiahs” before the ravaging of the human race, so it makes sense there’d be some shallow business about the nature of sentience and suchlike. (For what it’s worth, Solo: A Star Wars Story handles the topic a lot better, as well as being a far superior film.) Besides, the actual plot of Future World concerns a young man, Prince (Jeffrey Wahlberg), venturing from his idyllic Oasis in search of medicine for his dying mother (Lucy Liu). Throughout his journey to the shores of the dying sea where the drugs can be found, he’ll fall foul of War Lord, befriend the robotic (in nature and performance) Ash, visit a strip club called “Titty City” presided over by Snoop Dogg’s Love Lord, and still manage to find a dealer in the form of, believe it or not, someone called Drug Lord (Milla Jovovitch). 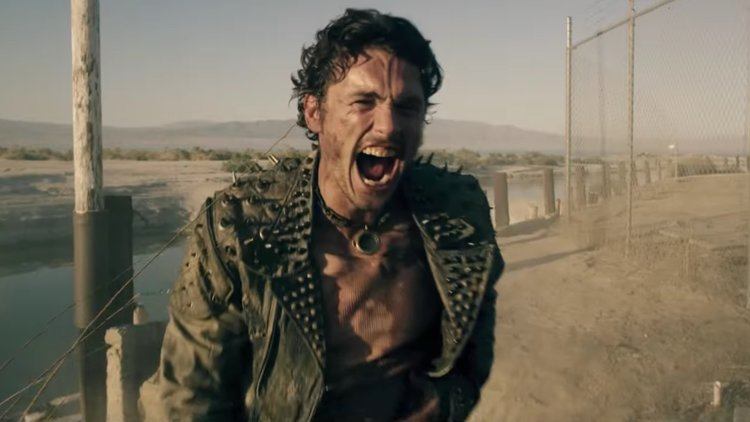 The desert setting, complete with its leather-clad motorcycle gangs, is obviously reminiscent of Mad Max: Fury Road, which is not at all a favourable comparison for Future World. Elsewhere, the production and costume design (courtesy of Eve McCarney, David Page and Jonny Pray) opts for hilariously obvious details like the Oasis being bedecked with finery and Love Land drenched in gaudy neon lights, just in case you were expecting some kind of imagination to be on display here. Everyone is overacting to the point of utter absurdity (especially Franco, but Jovovitch comes close, even if she does get a moment of drug-enhanced ownage that made me wistful for those Resident Evil movies) and the most interesting casting choices don’t even get anything to play – Lucy Liu has, like, two scenes, and she spends both of them bedridden.

As you could probably tell from the title, synopsis and cover art, Future World is a b-movie knockoff that brings none of its own ideas to the post-apocalyptic table and is instead content to riff, aimlessly, on established tropes. Burdened by embarrassing performances and ill-advised attempts at grittiness and maturity which just come across as childish, the future has rarely looked bleaker than it does here.