A moderately diverting heist movie, Ocean’s 8 might not do quite enough to justify its running time, but it has an exceptional cast and an abundance of charisma.

A moderately diverting heist movie, Ocean’s 8 might not do quite enough to justify its running time, but it has an exceptional cast and an abundance of charisma.


Ocean’s 8 is a lot of things, most of them contradictions. It’s better than you were expecting, but not quite good enough. It’s a movie about women directed by a man; a gender-swapped idea with very little idea about gender. There’s a heist within a heist, but neither is really the point, and it’s a diverting little thing right up until it isn’t anymore.

The opening is familiar. Like the first film, we meet our protagonist in a sterile prison interview room, promising the state that upon release they’ll certainly behave. But unlike the first film, our antihero isn’t George Clooney – it’s Sandra Bullock, in her element as his master thief sister, Debbie. She assures the parole board she just wants the simple life. Moments later, she’s strutting through high-end department stores in a designer gown, grifting her way into a new wardrobe and a luxury hotel suite.

Like brother, like sister. And so far, so familiar. Ocean’s 8 isn’t a reboot, but as a sequel it works by re-treading the same ground, so there isn’t much distinction to be made either way. Debbie, unsurprisingly, has spent her time inside cooking up a scheme. To pull it off she needs a crew, and there’s a moderate to fair chance it’ll somehow incorporate an old flame, in this case played by Richard Armitage rather than Julia Roberts. 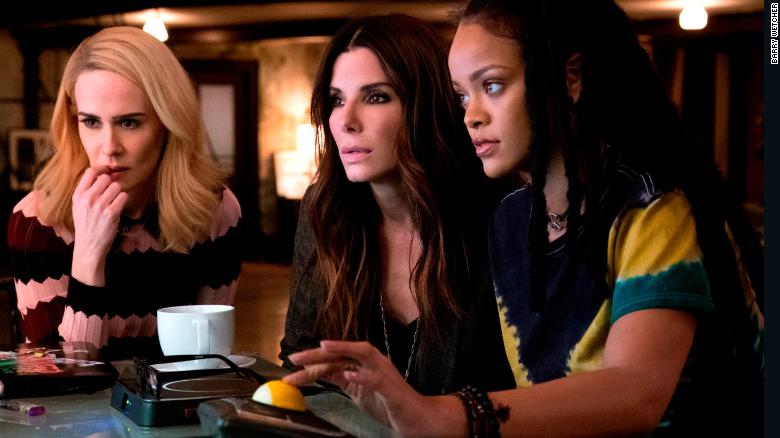 First, she hooks up with an old partner, Lou (Cate Blanchett), then a bankrupt fashion designer (Helena Bonham Carter), a jewellery-maker (Mindy Kaling), a hacker (Rihanna), a fence (Sarah Paulson), and a pickpocket (Awkwafina). The heist, seeing as you’re asking, involves the lifting of a $150 million unique Cartier necklace called The Toussaint, to be worn to the Met Gala by a socialite patsy named Daphne Kluger (Anne Hathaway).

This is all competently directed by Gary Ross, who also co-wrote the script with Olivia Milch, but it’s a modest scheme compared to those undertaken by George and his cohorts. In a couple of ways, this is a good thing. It allows Ocean’s 8 to float along on the considerable charisma of its cast, rather than the intricacies and innumerable working parts of an implausible heist. And it means that Ross isn’t forced to imitate Steven Soderbergh, although you do find yourself wondering what he might have done with the material. 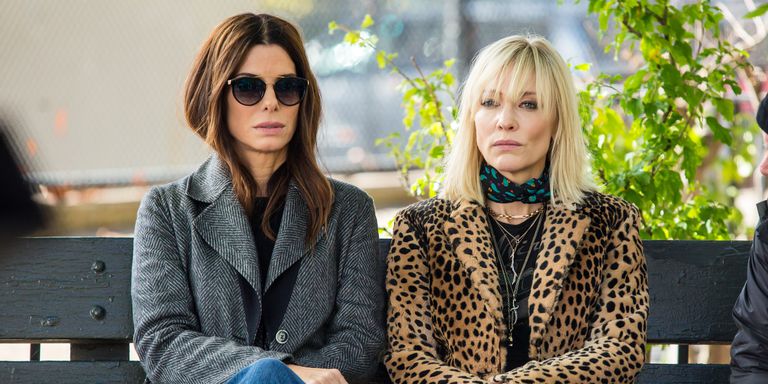 That cast, though. Bullock leads with obvious, infectious enthusiasm, but she’s upstaged at every turn by Blanchett, and both concede any scene they share with Hathaway to the latter’s incisive portrayal of female celebrity. That’s the closest Ross’s movie comes to any kind of insight, especially concerning women, but to get within touching distance is an achievement in itself. The rest of the cast are given less to do, but make their moments count enough that you scarcely notice how much of the plan depends on Rihanna’s character tapping away at a keyboard.

Ocean’s 8 suffers in the final act. Post-heist there isn’t much to do, the reveals don’t necessarily satisfy, and suddenly James Corden is there. But until then it’s a competent, well-meaning, often quite funny excuse for movie-star glamour to be put to relatively good use. I don’t know how many eight-year-old girls dream wistfully of becoming criminals, but I imagine a fair few wouldn’t mind being as effortlessly charismatic and in-control as Sandra Bullock is in this movie. Ocean’s 8 is for them.