A solid episode with a couple of interesting ideas, “No More Mr. Nice Guy” unfortunately still exposes a few chinks in the armor of NBC’s sci-fi series.

A solid episode with a couple of interesting ideas, “No More Mr. Nice Guy” unfortunately still exposes a few chinks in the armor of NBC’s sci-fi series.

The third episode of NBC’s Reverie, “No More Mr. Nice Guy”, revealed a couple of chinks in the show’s glossy sci-fi armour. One of them was the general repetitiveness of the show’s structure: Each week, Mara delves into someone’s wild imaginings, forces them to confront whatever trauma they’re trying to escape from, and returns them to the light just in time for a happy ending. The other was the glacial progression of the on-going state of Mara’s mental health, as she attempts to assuage her guilt through the aftereffects of the program.

Luckily, despite bringing both of these issues into sharper relief, “No More Mr. Nice Guy” didn’t succumb to them entirely, introducing some welcome wrinkles to the show’s developing architecture. The poor soul in need of redemption in this episode was Nate (Ashley Zukerman), an upright suburbanite due to become a father. For the last three months, Nate has been the leader of a gang of bank robbers. In a dapper suit, wearing a wolf mask and wielding a golden pistol, he escapes from the scene by helicopter as he scatters handfuls of pilfered profit like a contemporary Robin Hood.

Nate’s wife, Annie, and her attorney want him out of there, and they’re intending to sue Onira-Tech for damages. If you’re wondering why a cutting-edge experimental technology program wouldn’t be litigation-proof, so was I. It’s probably best not to think about it too much.

Besides, there’s more going on. As always, Nate’s retreat into Reverie stems from unaddressed personal issues, but the interesting angle from which “No More Mr. Nice Guy” approaches that concept is through the idea of the program’s adaptability. Because it can read a client’s emotions and reactions so well, it’s able to create aspects of itself that are outgrowths of a particular – perhaps even subconscious – anxiety. Paul explains this concept to Mara by taking her on a tour of one of his own Reveries: A perfect reconstruction of his childhood home, with an additional room that the program had created to house his abusive, alcoholic father. 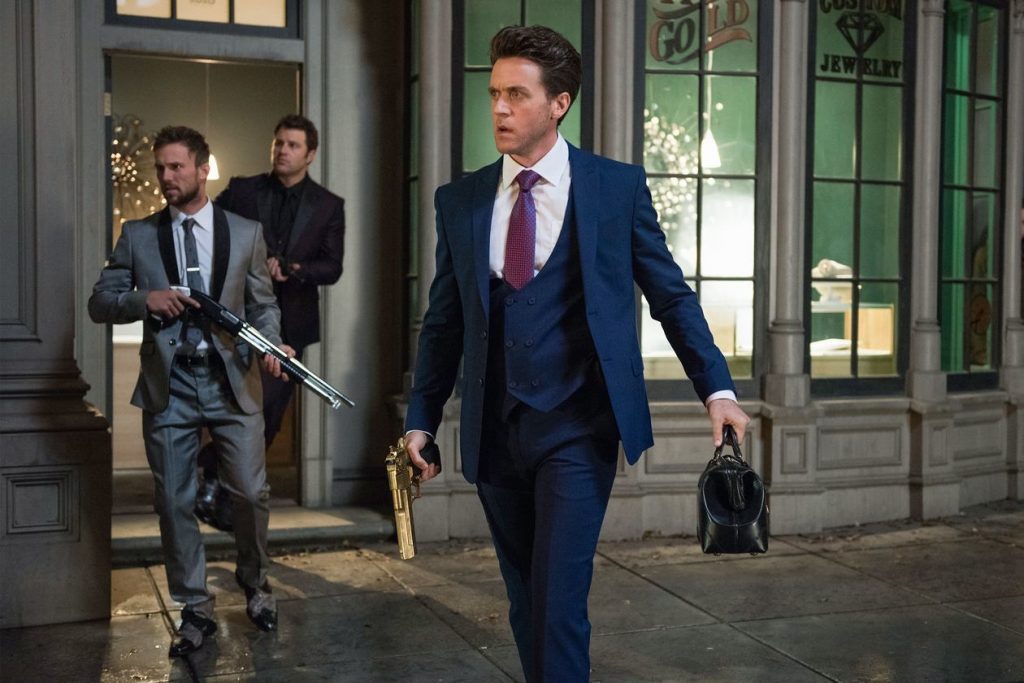 Reverie, then, had taken it upon itself to create an outlandish expression of Nate’s inadequacy; a Mad Max-style rendering of a home invader who had threatened and humiliated him.

It’s an intriguing idea, and once Mara understands it, she’s able to use aspects of the over-the-top personification to sleuth her way to a real-world solution. It was a nice deviation from Reverie’s standard formula, and made for an emotional payoff to Mara’s own development as she herself returned to the scene of her own greatest trauma in the hopes of facing it head-on.

That repetitiveness is still there, though, and one short scene per episode devoted to Mara’s personal demons seems like too little to sustain interest in her wavering mental state. An enjoyable scene in which Mara teaches the sullen Alexis how to connect with people, and the gradual unfurling of Paul’s tragic backstory, both suggest that Reverie has a lot more of its characters to offer. But it needs a little refinement and enlivening of its ideas if people are going to be willing to stick around for it.

“No More Mr. Nice Guy” was the third episode of Reverie‘s first season. Check out our full series coverage.