The Netflix “comedy special” Nanette is a televised version of Hannah Gadsby’s award-winning “stand up” stage show from 2017. It is so eye-opening, personal and encouraging that it feels unfair to squeeze it into a nutshell.

The Netflix “comedy special” Nanette is a televised version of Hannah Gadsby’s award-winning “stand up” stage show from 2017. It is so eye-opening, personal and encouraging that it feels unfair to squeeze it into a nutshell.

I need to think carefully about where to begin with Hannah Gadsby: Nanette. I want to tell you about Hannah, about her style, her subject matter, and more importantly her craft; and I want to talk about whether comedy is a genre or a medium. I don’t want to tell you how I felt about all those things, because it was so bloody personal. And a part of me doesn’t want to tell you what to expect, because I went into this show blind, and why the Hell shouldn’t you? Doing so meant I followed her submissively and gradually became seduced by the tension she created.

I wasn’t going to say how it felt.

Let me step back from that for a moment.

I don’t often watch stand-up shows. Maybe it’s because it’s rare that the humor matches mine, maybe it’s because they are usually so much better live (I’ve seen Jimeoin, Jimmy Carr, Mark Thomas, Bill Bailey and Dylan Moran live. Funny that: no women, so far). So when the Netflix catalogue presented this new “comedy special” Nanette as something I might like, I was a little dubious about how Netflix would presume to know my taste and wary about stepping out of my comfort zone. And step I did, not entirely sure how open-minded to be because I knew nothing about Hannah Gadsby.

Turns out hardly anyone does know about her, at least outside of Australia and Tasmania. But the live show she devised and delivered last year won awards in a number of cities and was performed as widely as Edinburgh, so the word is out now. This Netflix presentation of her show does kind of feel like Hannah Gadsby has arrived in the comedy/stand-up arena. 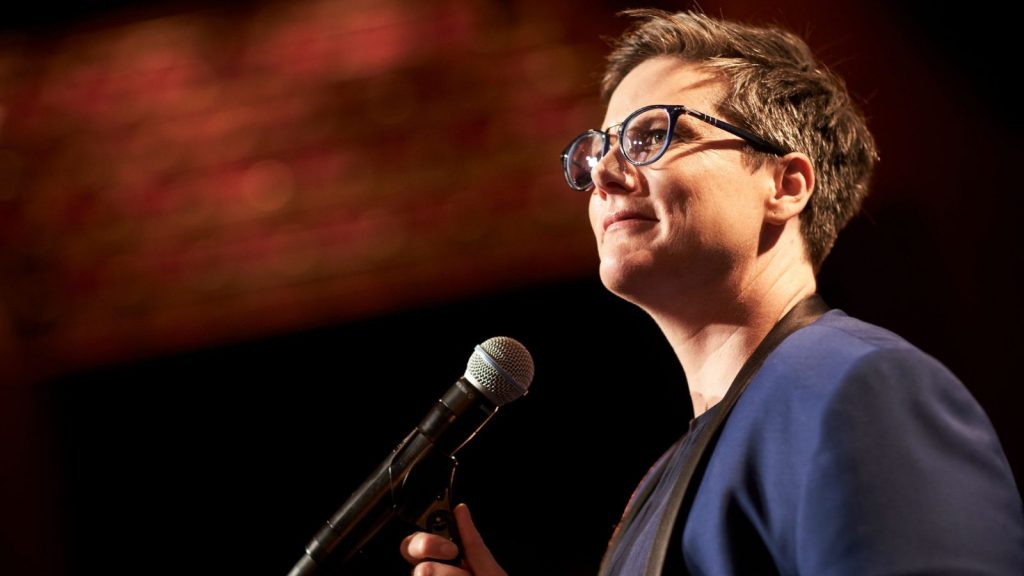 At first, Gadsby appears to be an intelligent, unassuming woman: subtle clothes, friendly voice; the sort who enjoys the sound of a teacup resting in its saucer more than a party. She talks about her “quiet” lesbianism (the Pride flag is a bit busy for her tastes) and her degree in art history, with gently humorous anecdotes along the way. And you think this is going to be a nice, easy-going show. And then you find out why staying in the shadow of the gay scene felt best for her (I refuse to tell you, and risk softening that blow). The anecdotes now and then steer into serious territory, but these aren’t simply to shock (like Jimmy Carr) or to promote a campaign (like Mark Thomas): these serious moments serve to explain Gadsby’s story; explain what brought her to this point and who she truly is.

Comedy can go either way; that dreadful, puerile film I reviewed a couple of months ago was a prime example: I can’t even remember its name now, but lots of viewers inexplicably loved it. [Editor’s Note: It was Game Over, Man!.] Gadsby’s comedy style and subject matter might put some people off, but I would urge you to keep your mind open and going until the end because this is a show to be respected and understood more than it is to be enjoyed: you may well enjoy parts of it, but I would not be surprised if any reader looks back on it at the end with admiration and a sense of having learned a lot about people, about life, and especially why people with experiences that have shaped them cannot simply put them aside at will. Personalities are directed and carved by experiences, like rivers are carved by erosion; and personalities are with us and throughout us all the time. If you don’t know what I’m talking about, watch Inside Out again before watching Hannah Gadsby: Nanette.

Nanette is exquisitely crafted in terms of carrying the viewer up and down the waves of tension and humour she lays out. But in doing so she not only wraps the audience up in her words, but also pulls apart the medium of comedy, questions whether it is right for her, or indeed right at all when it comes to serious topics like prejudice, for example. I’ve haven’t seen a genre examined so intelligently since Rubber did that for the horror genre.

I built a career out of self-deprecating humor. That’s what I built a career on. And I don’t want to do that anymore. Because do you understand what self-deprecation means when it comes from somebody who already exists in the margins? It’s not humility. It’s humiliation. I put myself down in order to speak—in order to seek permission to speak. And I simply will not do that anymore, not to myself or to anybody who identifies with me.

By the way, a few viewers have complained that Hannah Gadsby hates men, based on this show. I listened carefully, and I heard no evidence of that at all. What she hates is misogyny and the social environment that led to many men behaving and thinking that way. I heard no sense of blame from her: but she badly wants to get out from under its negative influence, and I wholeheartedly applaud that. 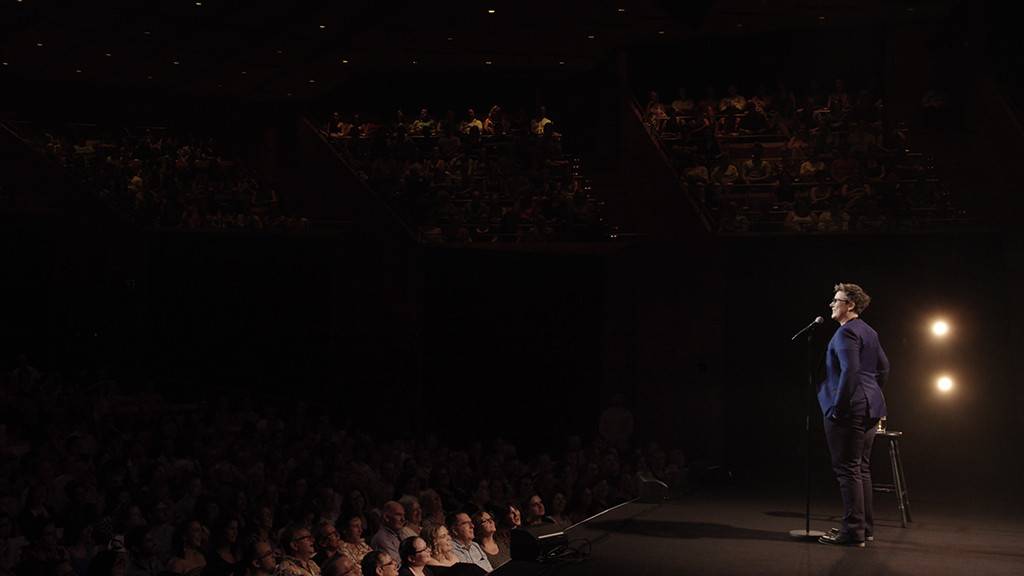 She doesn’t overcompensate for insecurity by showing off, like some comedians; quite the opposite. Some comedy specials might focus the camera on the audience now and then, showing how much people are laughing, or some famous faces. Hannah Gadsby has a huge audience, but we hardly see them: this is her show and they are part of the set, like the people in her life (mother and bullies alike) are part of the environment that molded her personality.

Please do watch Hannah Gadsby: Nanette. I have no doubt anyone who watches it with an open mind can gain insight, whether it’s about how humor works, how self-esteem works, or just what a bloody sharp manipulator of moods Gadsby is. I laughed out loud, and I cried, and I will watch it again.