“Princeton Offence”, the latest episode of Marvel’s Cloak & Dagger, develops the personal quests of its heroes but remains somewhat contrived and unengaging.

“Princeton Offence”, the latest episode of Marvel’s Cloak & Dagger, develops the personal quests of its heroes but remains somewhat contrived and unengaging.

It occurs to me that I care very little about this show. I’ve been wondering why, and haven’t really arrived at any satisfactory conclusions beyond it being pitched at a demographic that doesn’t include me – a demographic for which Tyrone telling Tandy last week to “check her privilege” probably amounted to meaningful social critique rather than an awkwardly try-hard attempt at being “woke” for the Millennial crowd. Princeton Offence, the fifth episode of the first season, doesn’t really have any stand-out moments like that, but then again it doesn’t really have much of anything.

The point of “Princeton Offence” was the development of both Tyrone and Tandy’s personal quests for justice; the former for his brother, the latter for her father. But the two became conflated on multiple occasions as the heroes tried to puzzle out their nebulous powers and their bizarre connection to one another, occasionally crossing paths without much of a thought spared for the development of their relationship beyond contrived, random encounters.

Tyrone, after having been told by O’Reilly to drop the amateur sleuthing and try being a kid for a while, is focusing on the State Championships basketball game – coincidentally enough against the team from his old neighbourhood. It swiftly becomes apparent that the rough kids are getting the short end of the stick as far as the officiating is concerned, so an appalled Tyrone throws the game. Justice! Racism and classism aren’t desirable even if they benefit you; he’ll honor his brother not by carrying his team to an unjust victory, but staying true to his values. And in the process he basically ruined all the great jokes I had lined up about him being one of the only black players on a basketball team.

Despite the loss, things go pretty well for Tyrone. Evita, impressed by his actions, sneaks into his room after the game for a celebratory no-pants-dance. He stuck to his principles, and he got laid. Can’t say fairer than that. But it isn’t all roses. He transports himself to a garage operated by one of his brother’s old friends, Duane, who has apparently done well for himself. Turns out he has, but by being responsible for the city’s drug problem and getting in bed with Connors. One of the few remaining connections to Tyrone’s brother, his past and his identity is not only aware of Billy’s killer, but working with him. 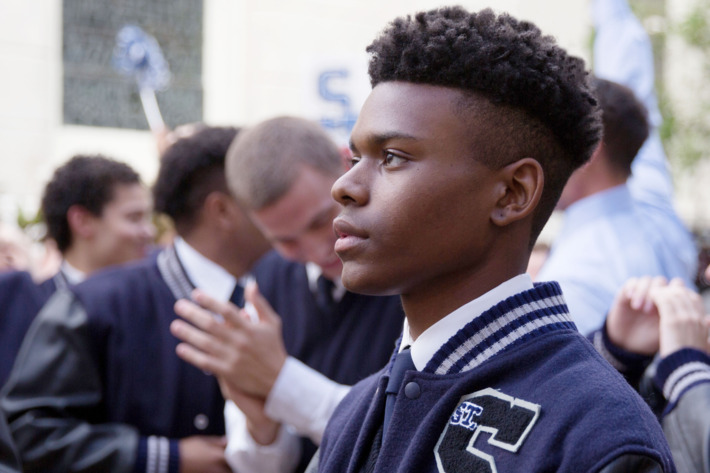 That can’t be easy to swallow, but it went down easier than Tandy’s investigation did for me. First, she covered the floor of her little hideout with Roxxon evidence, set to aggressive montage music, then she somehow fabricated a fake identity, got a convenient new job, attended a Roxxon party where she strutted around touching people to trigger tell-tale visions, had a brief interlude with a teleported Tyrone which resulted in her knocking him off a balcony, discovered the identity of the man she presumably wanted to kill, but then, after staging a breakdown ploy outside his home, decided not to because he helped change her tyre.

I don’t even know where to start with all this. At first I was thrilled that “Princeton Offence” was actually making an effort to move the plot forward rather than indulging in too much fancy-pants structural flourishing and time-bending ethereal shenanigans, but the actual present-day, real-world plot makes about as much sense as the metaphorical dreamscapes, which is to say none at all. Style over substance was what crippled Legion, another Marvel show, and if Cloak & Dagger isn’t quite that guilty of the sin it can’t be said that it makes things much easier – or more enjoyable – for its audience.

Thank goodness for O’Reilly then, who had some moments in “Princeton Offence”, including a brief emotionless dalliance with a handsome fellow copper and another scene in which she took coke bumps to gain the trust of Connors. I have no clue why she’s willing to go so far in the pursuit of justice, but she’s doing it without any teleportation or visions laden with meaningful imagery, which puts her, in my book, ahead of the show’s actual heroes in terms of likeability. What can I say – I’m not a big fan of angsty revolts against corruption. I’m results-oriented. Maybe we’ll get some next week.