Amy Adams plays the lead role in HBO’s new miniseries Sharp Objects, but the main character is unease. You can feel it rolling along the streets like trash; creeping through the foundations of a sprawling childhood manor seemingly plucked straight from a horror movie. It seeps from the corners of the screen during dream sequences and eerie quick-cuts to stray, stinging memories. The Sharp Objects premiere is titled Vanish, and a young girl does indeed disappear, but that pervading sense of dread never goes anywhere.

Adapted from Gillian Flynn’s debut novel (a tome obscured by the otherworldly success of Gone Girl), Sharp Objects comes to HBO courtesy of Marti Noxon, and is directed by Jean-Marc Vallée, who directed each episode of Big Little Lies, another female-led HBO series adapted from a novel that in some ways feels like a precursor to this one. Adams plays Camille Preaker, a hard-drinking investigative journalist for a St. Louis newspaper who is despatched by her editor to her hometown of Wind Gap, Missouri, in order to write about two missing, presumed-dead little girls. 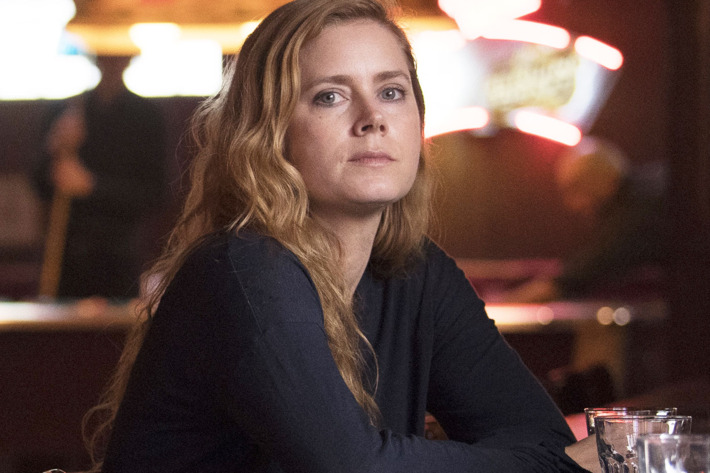 That’s the main plot, anyway. But the Sharp Objects premiere is most concerned with the complex psychological roadmap of its protagonist, which veers through the sparsely-populated rural town and circles it, again and again, drawn to an as-yet-unspecified emotional trauma. Flashbacks – the Sharp Objects premiere uses them liberally – explain that said trauma involves the untimely death of Camille’s sister (the younger Camille is played by Sophia Lillis, late of last year’s smash remake of Stephen King’s It). The legacy of what Camille experienced as a child swirls around the bottom of each glass and bottle she uses to numb the memories. In almost every scene she’s drinking, but not drunk; she’s functional in that subtle, practiced way that people tend to be when alcohol is their master rather than their servant.

Speaking of which, Camille’s estranged, old-money mother, Adora (Patricia Clarkson), has a servant of her own – perhaps not entirely coincidentally, a black one. It isn’t remarked upon in any kind of racial context, but it doesn’t really need to be. The geographical specificity of Sharp Objects is a commentary in itself; here, it says, is a town held aloft by leftover riches and simple, old-fashioned industry, one that the passage of time has mostly left ignored. The script is sometimes notably heavy-handed in how it displays Adora’s overbearing attitude to parenting and her neighbourhood reputation, but it’s what remains in the margins, unaddressed, that really colours the setting. 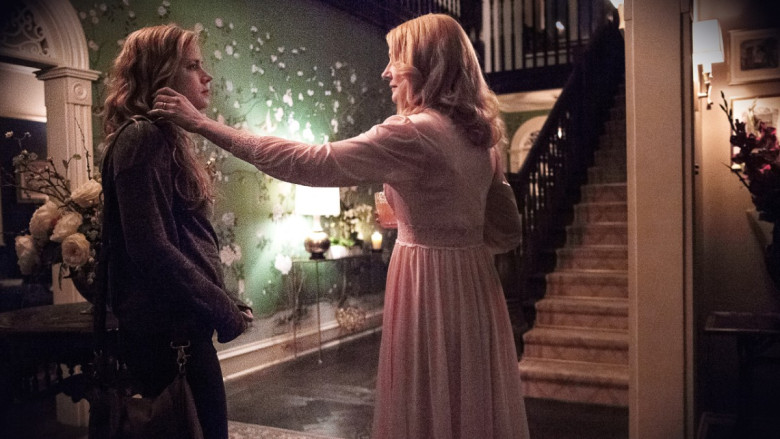 In the same creaky house is Camille’s stepfather, Alan (Henry Czerny), and half-sister, Amma (Eliza Scanlen), all suspended in a simulacrum of the past; the house, the clothing, the servant, all feel psychologically tethered to what was, terrified of what is. Whenever Camille steps within the walls, she’s reduced to an almost childlike state, warned not to stay out all night, to do anything that might impact her mother’s social standing, and most certainly not to discuss the details of the case, which are too horrific to be spoken aloud. The two missing girls – one of whom, throughout the course of “Vanish”, is found dead, perched on an alley windowsill – are not the source of dread in the Sharp Objects premiere. That honour goes to Camille’s time-locked home, where a family live a pretend life no more real than the one unfolding in Amma’s doll house.

“Vanish”, for a premiere, is brazenly slow, content to unfurl its central mystery glacially, and to be reliably non-specific about the roots of Camille’s psychological damage. Whispers rattle through Wind Gap as though the town speaks and listens as one, making the investigation impenetrable. The local detective, Richard Willis (Chris Messina), remains tight-lipped, as do most of the other witnesses, who are also, by definition, suspects themselves. The Sharp Objects premiere was in no rush to cast blame, and I don’t imagine it will be any time soon. But the performances from Amy Adams and Patricia Clarkson are immediately compelling, as are the show’s twists of creative DNA that resemble the haunting imagery of True Detective and Big Little Lies’s eerie sense of place. Where the show’s going is anyone’s guess; let’s not be in a rush to get there.