Action-packed and true to the characters, Star Wars – Last Shot: A Han and Lando Novel balances weighty themes with a fast-paced adventure to great effect.

Action-packed and true to the characters, Star Wars – Last Shot: A Han and Lando Novel balances weighty themes with a fast-paced adventure to great effect.

Star Wars — Last Shot: A Han and Lando Novel is part of the current Star Wars canon. Check out the timeline.

If you’ve ever wondered whether or not Lando Calrissian selects trousers specifically to accentuate his bulge, then Star Wars – Last Shot: A Han and Lando Novel, by Daniel José Older, is the canon novel for you. Although you’d probably do well seeing a doctor, too.

It’s somewhat meandering, but Older’s novel is a time-hopping tale of the past catching up to the future; long-ago misdemeanours resurfacing in middle-age to remind the notoriously immature heroes that no matter how much growing up they think they’ve done, there’s always more to do. It’s pacey and personable, with a well-observed sense of characterisation, leaping back and forth between distinct periods of galactic history. Older’s achievement here is not just to transplant Lando and Han faithfully to the page, but to do it at various points in their lives, and to contrast the personalities of their younger and older selves.

The present-day portion of Last Shot is set after the fall of the Empire in Return of the Jedi and Chuck Wendig’s Aftermath trilogy. Han and Leia are new parents to Ben Solo, while remaining popular fixtures of the burgeoning New Republic. Han, relatably, is struggling with the idea that he’ll ever be a good dad or husband, especially considering that his wife is one of the most beloved and capable figures in the universe and his son is a baby psychopath. That latter point isn’t exactly clarified here, but I was reading between the lines. 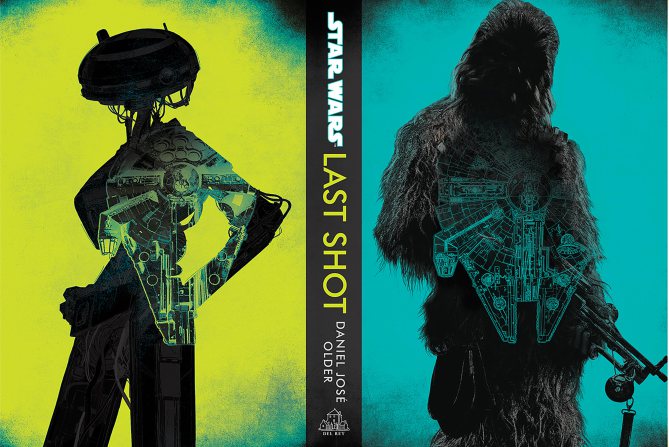 There’s also, of course, the reality that his life as a freewheeling man of mystery is at an end. Well… almost an end. Lando, suffering a crisis of the heart as he grapples with his real, pesky feelings for a Twi’lek lover named Kaasha Bateen, seeks out Han to inform him that a deranged Pau’an named Fyzen Gor is on the hunt for a mechanical McGuffin that he believes the captain of the Millennium Falcon took from him decades ago. As they’ve both held that title, at one point or another, they set out to assemble a new team of would-be smugglers to deal with this particularly oddball threat.

Despite Last Shot being, according to its own title, “a Han and Lando novel”, it’s really the supporting cast across the various time periods that help to flesh out Older’s vision of the current Star Wars canon. There’s a new Gungan character that is supremely pissed off at the Jar-Jar Binks stereotype, a stubborn Ugnaught from Cloud City who wants to spend most of his time sleeping, an Ewok hacker with a thing for Chewbacca – I’m a poet and I didn’t know it – and a non-binary pilot whose fluidity nobody bothers to comment on. Meanwhile, Lando’s Twi’lek companion helpfully lectures him about consent and basic respect, while his droid companion, L3-37 (also seen in Solo: A Star Wars Story) lectures him on the treatment of droids and the nature of sentience.

It might sound preachy, but Last Shot does what all good science-fiction is supposed to – hold a mirror up to our current society and let us reflect on the reflections. That fusion of weighty themes with an action-packed adventure story is where Last Shot excels, perhaps even more so than in its note-perfect depictions of long-standing fan-favourite characters. While its penchant to introduce new or lesser-known characters and hop away through time before they’re properly established can get a little wearisome in particularly busy stretches, Older’s prose is clear enough that Last Shot never becomes confusing or convoluted, even as various timelines intersect. It isn’t perfect in its construction, but it might be in its tone, which champions inclusivity and acceptance at a time when we’re more divided than ever before.