Lots of fun and boasting an intriguing premise, Die!Die!Die! #1 gets Kirkman and Gimple’s new on-going series off to a fine, gory, foul-mouthed start.

Lots of fun and boasting an intriguing premise, Die!Die!Die! #1 gets Kirkman and Gimple’s new on-going series off to a fine, gory, foul-mouthed start.

It must be said that Robert Kirkman and Scott M. Gimple are on my s**t list judging by the current state of both The Walking Dead and its spin-off, Fear the Walking Dead. As such, it’s easy to be cynical about their new on-going comic series Die!Die!Die!, the first issue of which hit stores today after a surprise day-before announcement. Coming courtesy of Image and Kirkman’s Skybound, and with art from Chris Burnham and Nathan Fairbairn, Die!Die!Die! #1 turned out to be a nihilistic, blood-soaked romp that was actually a lot of fun if you’re into people getting their noses sliced off.

The plot – currently little more than an outline, but made more compelling by a last-panel cliffhanger – concerns a secret service within the U.S. government, a cabal that carries out targeted assassinations on people who don’t deserve the gift of life – kind of a state-sanctioned Jigsaw, if you like. The business is administered by a Senator who is definitely not an analogue for Hillary Clinton, no sir, most assuredly not, and much of Die!Die!Die! #1 is comprised of her whiskey-soaked justification for the bloody opening action scene. 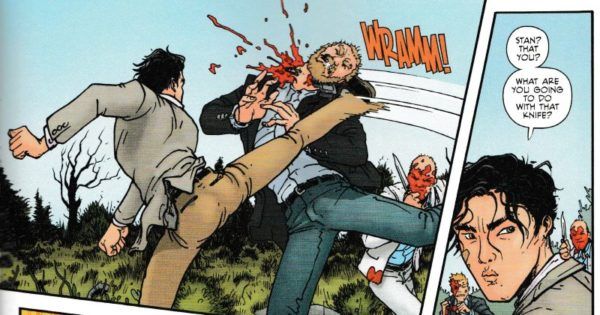 And boy, it is bloody. But Burnham gives the art a cartoonish, abstract quality that makes the violence more palatable; credit, too, to his clarity within the action-packed panels, which are easy to imagine in motion. The British setting for much of Die!Die!Die! #1 is ably evoked too, which is always a plus since football is indeed coming home.

The writing, I suppose, fares slightly worse. Having all the characters be potty-mouthed is always a sure-fire way to create an “adult” tone, but in a few instances it seems like a bit of a crutch, and a try-hard Tarantino-esque discussion of the word p***y’s applicability as an insult stretched the idea of knowing cleverness to breaking point for me. That said, the plotting was clear, and the idea of going behind-the-scenes of a weaponised, tyrannical form of liberalism is compelling enough to me that I’ll be keeping up with the series.