Who Is America? Episode 1 Review

Sacha Baron Cohen’s new show, Who Is America?, is uneven, but a vital skewering of modern American’s self-serious institutions.

Sacha Baron Cohen’s new show, Who Is America?, is uneven, but a vital skewering of modern American’s self-serious institutions.

The first episode of Who Is America? only has four segments, but I lost count of how many times I insisted to myself that it couldn’t possibly be real. It is, of course, which is what makes it hysterical and clever but also terrifying and tragic. Even if it isn’t always clear exactly who the target might be, or if the p**s is being taken to underscore a real political point or just to humiliate an idiot, when Sacha Baron Cohen’s new show really works, it is masterfully merciless.

As for Cohen, he has long been one of our finest and most subversive satirists, having invented such characters as Ali G, the Kazakhstani reporter Borat, and the flamboyant fashionista Bruno; elaborate, terrifically-observed fictions designed to dupe often-prominent people into saying terribly embarrassing things. In Who Is America? he returns to the screen slathered in prosthetic makeup, as he’s too famous now to pull off the ruses without it, but his new creations are just as recognisable as tools of his scathing political humour. And people are still dumb enough – or, I suppose, polite enough – to fall for it.

In the first segment, he interviews Bernie Sanders as Billy Wayne Ruddick, an “alt-right” conspiracy theorist who rides a mobility scooter, and who believes that Obamacare is to blame for his diabetes because it “made him go to the doctor.” Both this segment and the second, in which he poses as an increasingly extreme liberal documentarian, are the weakest of the show’s opening half-hour, as they test the limits of politeness and patience rather than people’s beliefs. The typically unflappable Sanders does start to lose it at Ruddick’s suggestions for solving economic disparity in the U.S., but not in the way that would make for great television. And while “I’m a cisgender white heterosexual male, for which I apologise,” is a great introductory line for a New Age left-winger, the dinner with the staunch Republican couple devolves into a skewering of the character Cohen is playing rather than the people hosting him, who continue to treat him as a guest in their home even as it becomes increasingly clear that he’s deliberately trying to rile them. 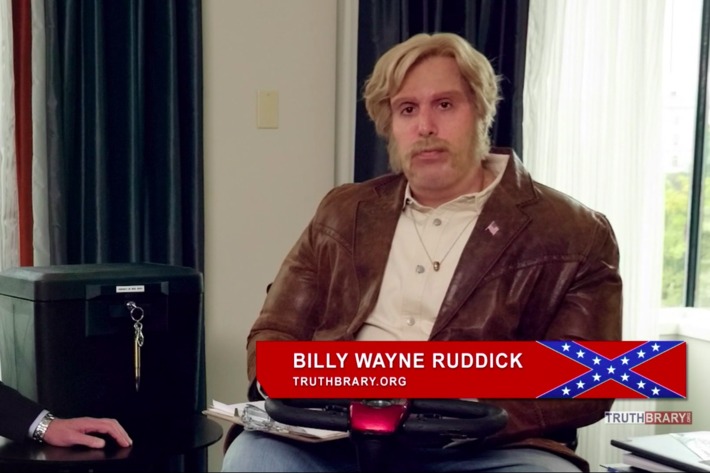 The question, though, is whether humanising two diehard Trump supporters is a bad thing. Many would suggest it is, but many would also suggest that anyone who supports Trump in any capacity is automatically an enemy of democracy and freedom, which is too simplistic of a moral position for good satire to hold. Who Is America? isn’t so much an attack on conservatism as it is a takedown of modern America’s self-serious trends and institutions; increasingly-absurd left-wing do-gooderism has become such a fixture of contemporary life (particularly on social media) that the idea of a child encouraged to “free bleed” on the American flag, or one’s wife having an open affair with a porpoise, are as ripe for mockery as anything else. The segment isn’t lacklustre because it has the wrong politics, but simply because it’s unclear whether the point it’s making is an accident or not.

Funnier (and more obviously absurd) is the third segment, in which Cohen meets with an uppity art gallery owner disguised as an ex-con who paints in his own s**t and spunk. It’s a delightful riff on modern art’s insistence that anything at all can be rich with meaning provided it’s presented earnestly, and Cohen’s innate ability to pivot around his patsy serves him well here, as he eventually has her removing pubes to contribute to his brush. But that’s nothing compared to the sheer insanity of the final skit, in which Cohen, as Israeli Col. Erran Morad, convinces sitting United States’ Congressman to help him film an instructional video which teaches four-year-old children how to use guns. 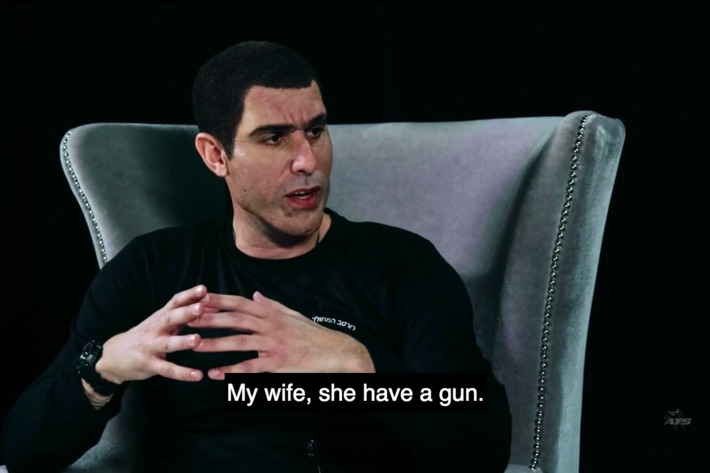 This would be funny if it wasn’t so petrifying, but the point of Morad’s child-arming campaign – “Kinder Guardians” – isn’t to be funny, but to put the public positions of these people through the wringer of logical absurdity. If these grown men can be so easily convinced to support the arming of toddlers – most do so gleefully – then what real, legitimate campaigns can they also be persuaded to endorse? And what actual dangers might that present for the American people? One gun lobbyist says, earnestly, that because children haven’t developed a conscience yet, “they can make very good soldiers.” That unironic suggestion of a home-grown pre-pubescent militia is the reason why a show like Who Is America? very much needs to exist.

Of course, the furthest ends of a divided nation are so entrenched in their views that Cohen’s examination won’t move them; they’ll insist that elected officials saying such things is egregious, which is true, or they’ll point out that these people were conned by our most prominent con-man into saying things they don’t really believe, which, I suspect, is half-true. (They were definitely conned.) But the meaningful truth of it all is that regardless of circumstance, these people said what they said. That should be worthy of consideration by even the most cynical citizenry, and if Who Is America? accomplishes one thing, it’s showing how easy it is to convince important people to eagerly humiliate themselves.