Another typically great Star Wars comic, Darth Vader Annual 2 fleshes out the relationship between Vader and Tarkin in a story that ties directly into the events of Rogue One.

Another typically great Star Wars comic, Darth Vader Annual 2 fleshes out the relationship between Vader and Tarkin in a story that ties directly into the events of Rogue One.

DARTH VADER ANNUAL 2 IS PART OF THE CURRENT STAR WARS CANON. CHECK OUT THE TIMELINE.

Continuing Marvel’s usual extremely high standard of Star Wars comics, Darth Vader Annual 2, written by Chuck Wendig, continues to develop the odd relationship between Grand Moff Tarkin and Darth Vader in a story that connects directly to the events of Rogue One.

With the Death Star nearing completion, Vader is placed under the authority of Tarkin and despatched to Geonosis in order to smoke out a saboteur who has been meddling with construction of the Empire’s new planet-destroying super-weapon. Between Rogue One itself, Catalyst: A Rogue One Novel, and a number of other tie-in books and comics, the Death Star had seemingly been covered from all conceivable angles in current Star Wars canon. But the increasingly testy rivalry between Tarkin and Vader gives this story some character, even if it isn’t exactly revealing any new truths about the project.

The most interesting thing about their relationship has always been Vader’s deference to Tarkin, and in Darth Vader Annual 2 we see that it doesn’t come easy. Tarkin, a genius strategist and political maneuverer, is little match for Vader physically, but his position within the Empire and his ability to ferret out information allows him to get under Vader’s helmet, so to speak, in a way nobody else can – and in a way Vader can do nothing about. Wendig captures the dialogue between the two very well, evoking the on-screen versions of both, and their bitter dislike of one another is at the centre of the issue. 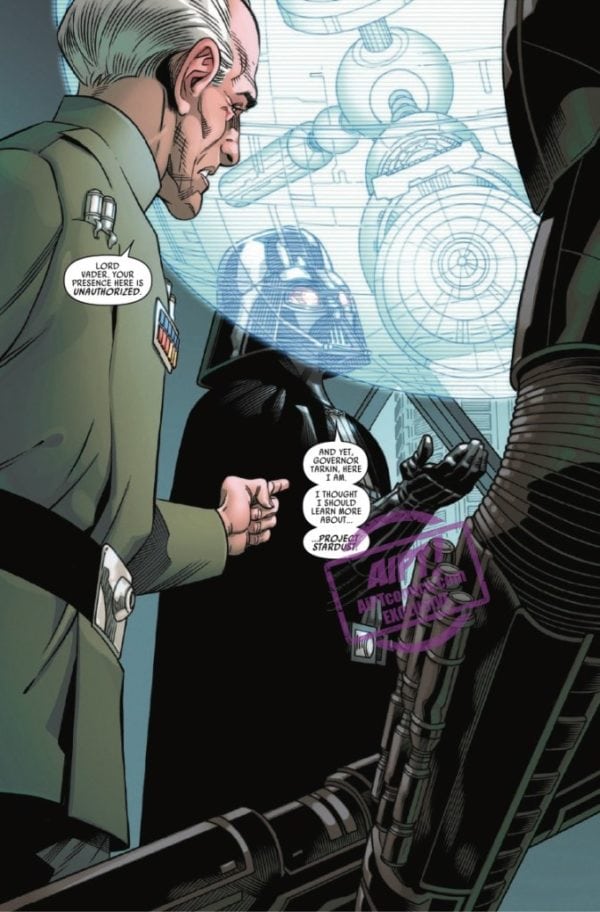 Leonard Kirk’s art bolsters this conflict, and also Vader’s internal struggle. During an argument with Tarkin we see Vader daydream about killing him, the fantasy rendered in red, and upon arriving on Geonosis we see similarly crimson flashbacks of his time fighting there during the Clone Wars. It helps to humanise Vader, to see him grappling with both his former identity and his rage-driven impulses, especially when Tarkin turns his own insecurities against him.

While the meat on the bones of Darth Vader Annual 2 might not be anything new, it works as such things usually do by folding familiar characters and locations into the story, connecting continuity dots and fleshing out the fiction. Orson Krennic and Galen and Lyra Erso all play minor roles, giving galactic events a richer sense of connectedness. We might not strictly need any more insight into the construction of the Death Star, but the revelation that Vader is slightly jealous of it is something that’ll stick with Star Wars fans for a while.