“Who Is America?” Episode 2 Review

Difficult to watch but impossible to turn away from, Who Is America? Episode 2 is incredible television that exposes the rot at the heart of contemporary society.

Difficult to watch but impossible to turn away from, Who Is America? Episode 2 is incredible television that exposes the rot at the heart of contemporary society.

I’m afraid to leave the house – Sacha Baron Cohen could be anyone. Then again, I’m reasonably confident that I wouldn’t be duped by a terrible actor slathered in hilariously fake-looking prosthetics; which makes it more amazing that so many people in Who Is America? Episode 2, including former Vice President Dick Cheney and Georgia State representative Jason Spencer, fall hook, line and sinker for that exact thing.

Oh, Jason Spencer. He’s only in the first 5-10 minutes of Who Is America? Episode 2, but his appearance was the most noteworthy and will be, one assumes, the most legitimately damning. Convinced by Cohen’s ex-Mossad anti-terrorism expert, Erran Morad, that he’s filming an instructional self-defence video, the Georgia politician learns techniques that include screaming the n-word as loud as he can, doing a terribly racist impersonation of a Chinese man (gibberish interspersed with occasional recognisable words, like “sushi”, “konichiwa”, “red dragon”, and “Ho Chi Minh City”) in order to take an up-skirt photograph using a selfie stick, and dropping his trousers to ram his bare backside towards a potential kidnapper in an attempt to imply they’re gay.

I know I said this last week, but this isn’t funny – it’s absolutely f*****g terrifying. This man is an elected representative who served four consecutive terms. (Luckily he was ousted in May of this year.) And yet he was remarkably easy to convince. In a statement since the recording, Spencer stated that he had asked for the provocative language to be removed in the edit; he did not, I’m sure you’ve noticed, refuse to use it in the first place. 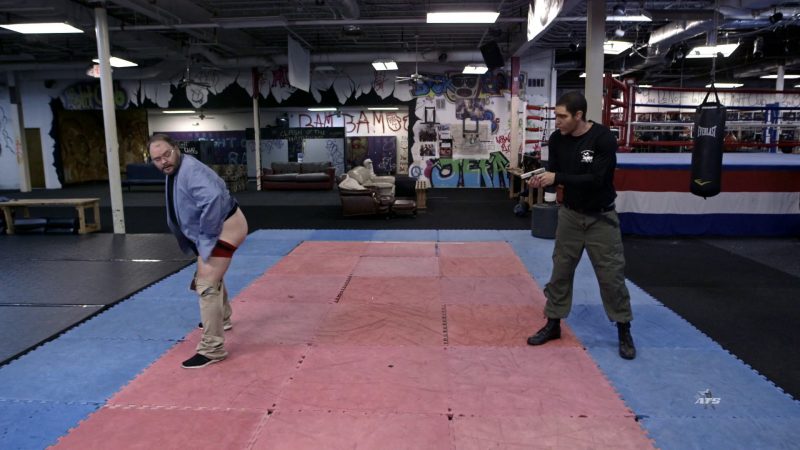 It isn’t just the right-of-centre that Cohen goes after in Who Is America? Episode 2, though, cornering former news anchor Ted Koppel as his Trump-supporting conspiracy theorist character, Billy Wayne Ruddick Jr. Ph.D., in order to discuss the crowd size at Trump’s inauguration. Koppel is polite, but also quite obviously aghast at the claims being made, which include a photo clearly taken in daylight that Cohen argues was taken at 11:56pm in the glare of a “solar eclipse.” Eventually, Koppel concludes the interview on the grounds that it is, quite rightly, a waste of time.

Former Bachelor contestant Corinne Olympios, on the other hand, does no such thing. Conned by Cohen’s Italian photographer, Gio Monaldo, into believing she’s filming promotional materials for a charity, she records a video urging people to adopt a child soldier in order to get them better training and munitions, puts on a hazmat suit to create fake footage of her in Sierra Leone, and then flat-out makes up a story about an African warlord not committing a massacre because he recognised her from the television. She describes the made-up experience as “humbling”. And while she looks slightly embarrassed throughout it all, I’d nonetheless describe her participation in the segment as “thirst”.

I’ll tell you who can help with that, though – Dick Cheney, whose famous pro-“enhanced interrogation techniques” stance is so strong that he’s willing to sign the bottle that Erran Morad uses to waterboard terrorists. He also concedes that what happened in Desert Storm is probably his “favourite war”, before gleefully reeling off the technologies and weapon systems that allowed him to facilitate the deaths of, as recounted by Morad, “100,000 actual terrorists and 700,000 potential terrorists.” At one point Cheney says, “I never thought of it as having a favorite war.” “Of course,” Morad interrupts, “but you’ve got to enjoy it too!” Cheney’s smirk suggested he did. 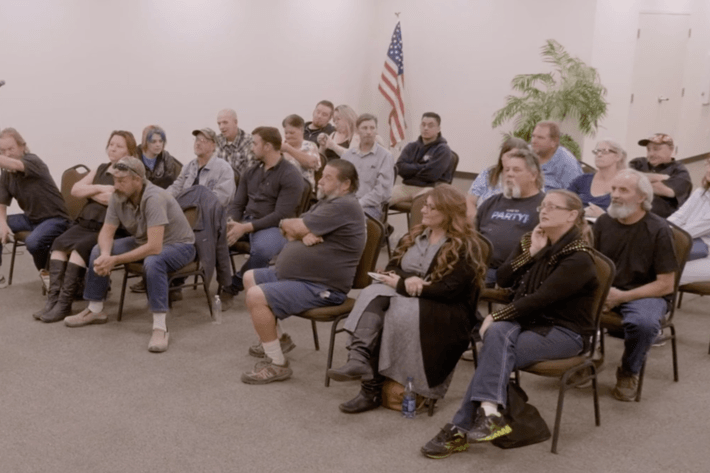 In Kingman, Arizona, Cohen disguised himself as self-hating white liberal Nira Cain-N’Degeocello in order to propose the construction of a $385 million mosque, the largest outside the Middle East, to be funded by the Saudi Government and the Clinton Foundation. The response from the focus group was predictable, but still a little shockingly sad. A bearded man explains that when he hears the word mosque, he thinks of terrorism, and that had he been allowed to bring his weapon, he would have probably shot Cohen dead for the suggestion of building one. Another man proudly admits he’s racist against Muslims. But my favourite attendee was the dude who triumphantly declared, “This town’s lucky to have black people in it.” When Cohen responds by saying that he’s quite right and that African-Americans add a lot to society, the guy is appalled at the suggestion that he meant black people being present was a good thing. “He’s saying,” interjected the potentially-lethal bearded chap from the second row, “there are black people in Kingman that aren’t welcome here either, but we tolerate them.”

In the final scene of Who Is America? Episode 2, Jason Spencer cuts off a fake terrorist’s prop p***s and eagerly eats it. I’m presenting that without comment.

It’s quite incredible to see elected officials parade around with their trousers around their ankles in order to combat ISIS. But the most damning thing of all is the proud, unfettered, righteous racism spewed by non-famous, everyday citizens. Who is America? I hope it isn’t them.