“Habeas Corpus” was an uneven second instalment of Castle Rock that would benefit from divesting itself of heavy-handed references and trusting in its potential.

“Habeas Corpus” was an uneven second instalment of Castle Rock that would benefit from divesting itself of heavy-handed references and trusting in its potential.


In Castle Rock‘s debut episode, Henry Dever returned home to answer his own twisted hero call. The second outing, “Habeas Corpus”, resumes in the chaos of Shawshank, where water tower prisoner the Kid has managed to murder half the inmates doing nothing besides flickering lights while strolling through the facility with an intense, chilling stare (think Magneto without the fabulous helmet). Or did he? Poor prison guard Dennis (Noel Fisher) pulls the alarm only to find the scenes of mayhem were only in his mind. That Dennis was the mystery caller who summoned Henry indicates his connection with the Kid is more intense than anyone should be comfortable with. Notably, “Habeas Corpus” ends its cold open with a title sequence featuring close-ups of King’s works. The first visible word circled on the page? The Devil.

What follows is an episode where the devil is mentioned (and mentioned), allegedly to press the viewer to question who is the true devil of Castle Rock. All signs point to the bug-eyed Kid, but are things ever that simple? Hopefully not. Locke fans disappointed by Lacey’s (Terry O’Quinn) death in Episode One can rest at ease–the ex-warden narrates the disturbing history of Castle Rock, calling each house one “stained with someone’s sin.”  Lacey’s pursuit of meaning in his dead town led him to build the cage where he would house the Kid (who he implies is the devil), an action called upon by God, or so he tells Sheriff Pangborn in his suicide note. Despite my love of Scott Glenn, his warning to new warden Porter (Ann Cusack) to keep the devil locked in a box is one of the weakest in the episode. Yes, it is worthwhile to know this wasn’t just a rogue operation by a religious zealot, but it feels poorly crafted. Paired with the dog scene later on, I give Glenn the VIP award for trooping through these lacklustre scenes. Thankfully the end of the episode indicates he is going to have more interesting things to do.

His warning does not go unheard and the Kid is moved from the infirmary into the general population, complete with a heavily inked new cellmate who just happens to favour swastikas. The intention is to allow the problem to solve itself. A dead devil is certainly a tempting alternative. Of course, this cellmate does not survive the episode, mysteriously dying of previously undetected, aggressive cancer (because, you know, the devil).

Henry, in the meantime, is following what little lead he has, visiting Lacey’s home where his blind wife Martha (Francis Conroy) provides limited insight into her husband’s action. What Henry finds, aside from a file of newspaper clippings documenting the town’s history of darkness, is stacks of “verse of the day” calendars, all torn to the same Biblical passage, Acts 16:33: “Even at that house night the jailer cared for them and washed their wounds. Then he and everyone in his household were immediately baptized.” 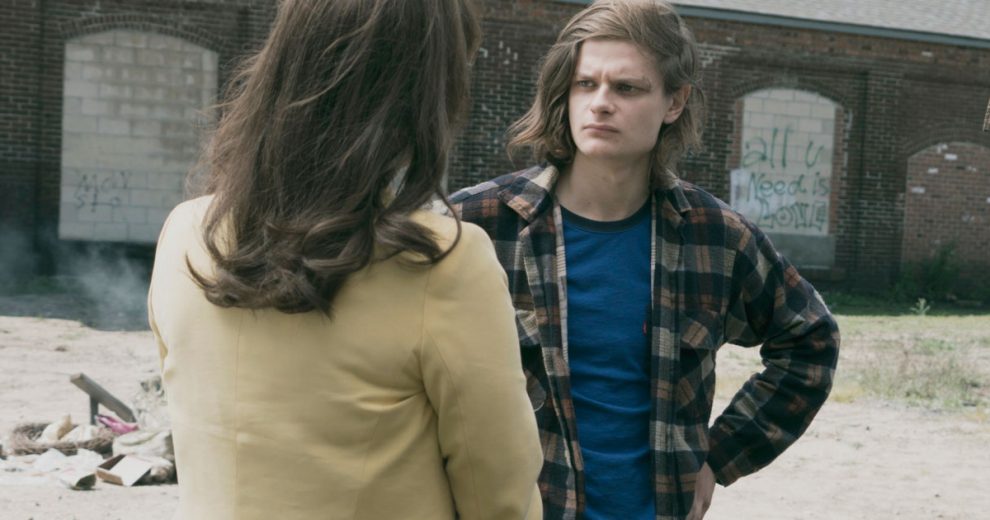 Superficially, the passage seems self-explanatory enough, or at least why it would appeal to the warden–a jailer caring for an injury before being baptized, ie. reborn. What is more interesting is the context of the actual passage. After Paul and Silas are arrested for preaching, an earthquake breaks open the prison doors, effectively freeing them. The jailer, so distraught that he will be punished for the jailbreak, prepares to kill himself. Instead, Paul and Silas minister to him, resulting in the mentioned baptism of the jailer and his family. So two men who are wrongly imprisoned save and convert a troubled jailer. Was Lacey looking for a saviour for his own redemption? It would be easy to laser in on that idea. However, note that the original story is about both Paul and Silas performing the baptism together. Could this be our Kid/Henry duo? Yes, the Kid is literally imprisoned, but by all indications from straight shooter Jackie Torrence (Jane Levy, bringing some much-needed pep), Henry’s childhood tragedy created a metaphorical prison for him.

Martha, for instance, takes no hesitation in damning him to Hell. At least the pastor now overseeing Henry’s late father’s parish seems happy to see him, noting the value of a redemption tale. If nothing else, that pastor gives Henry a way into Shawshank where, with Dennis’ help, he finally lays eyes on the man who invoked his name.

“Habeas Corpus” does give us more insight into Molly (Melanie Lynskey). Turns out she lived across the street from Henry and was an ardent admirer to the extent that she was questioned about his disappearance. Sure, now she’s an anxious drugged-out real estate agent, but there is a psychic affliction she describes as empathy dangled before us. In the police questioning flashback, we see the police tell her how cold Henry will be outside while she is warm inside. Left alone, she exhales vapour as if she is able to physically manifest her empathy.

Castle Rock provides an intriguing contrast to another show about coming home, HBO’s limited series Sharp Objects (catch up on our reviews here). Here we have characters coming home after tragic events have alienated them. They are outsiders viewing the ruins of crumbling towns, tasked with navigating a mystery that undoubtedly speaks to greater sins. Wind Gap and Castle Rock also represent settings as character–think about how present the towns themselves are in the plot and character development, and how much time is spent visually navigating the decay. Where they truly diverge is in the implications. While Sharp Objects is crafted in the tradition of the Southern Gothic, playing on Gillian Flynn’s skill at creating monster women, Castle Rock relies on the aura of Stephen King to do much of its heavy lifting. Sometimes it is more effective than others. As the show progresses, it might do well to consider stepping away from the heavy-handedness of “Habeas Corpus” (the dog scene… I mean, come on) and let the show breathe into its new narrative. Even King fans will tire of close-ups on Cujo newspaper articles. But there is good stuff here, threads worth weaving.