At its best, Who Is America? still manages to be hysterical and deeply terrifying, but this third episode had a few misfires, feeling a little aimless and uneven as a result.

At its best, Who Is America? still manages to be hysterical and deeply terrifying, but this third episode had a few misfires, feeling a little aimless and uneven as a result.

It’s often difficult to determine who comes out of a Sacha Baron Cohen show looking the worst. Nobody tends to emerge squeaky-clean, but a few manage to escape with their reputations relatively intact. Others are less lucky. Steered along by Cohen’s characters, they indulge their darkest impulses, their desires to say repugnant and reprehensible things, emboldened by being in the presence of what they believe to be an ally. It’s the beauty of a show like this one, which proves just how easy it is to have prominent public figures and sometimes sitting policymakers say and do heinous things. The problem with Who Is America? episode 3 is that it chose, mostly, the wrong targets, and didn’t end up condemning anyone besides those who’re already ripe for condemnation.

That isn’t to say it wasn’t funny – one sketch in particular was hilarious. It also isn’t to say that this problem is new to the series. In the premiere episode, Cohen’s liberal snowflake character, Dr. Nira Cain-N’Degeocello, went for dinner at the house of two Republicans who were exceedingly polite to him despite his obvious, constant attempts to insult them. He has two segments in Who Is America? episode 3 that played out in much the same way, to the detriment of whatever point Cohen is trying to make with the character.

The first was an interview with Atlanta rapper Bone Crusher and former Republican State Representative from South Carolina, Chip Limehouse. Matters turned awkward quickly when Cain-N’Degeocello tried to criticise Bone Crusher’s referral of himself as a “black man” as opposed to the more politically-correct “Afro-marginalized,” but it got weirder once he told a relatively detailed story about having sex with a man. Bone Crusher was content just to roll his eyes, while Chip got increasingly agitated and aggressive. It continued the show’s persistent theme of right-wingers being much easier to rile, but it didn’t really expose Chip in the way that, say, Jason Spencer was exposed last week.

Cain-N’Degeocello’s other segment was a rap battle against prominent Atlanta battle rapper Ness Lee. Now, full disclosure: I enjoy battle rap immensely, and find it to be one of the purest forms of the written and spoken word you’re likely to find anywhere – at least when it’s done well. Cain-N’Degeocello, needless to say, didn’t do it well. But when he conjured something halfway-decent – a line, perhaps unsurprisingly, about the size of his dick – the crowd and his opponent embraced him. I don’t know who this sketch was supposed to criticise, but it didn’t really manage to criticise anyone. 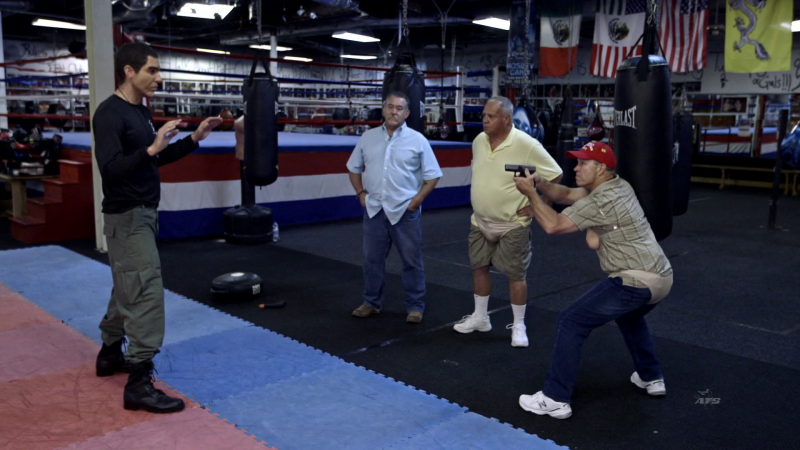 As always, the better segments of Who Is America? episode 3 were those belonging to Cohen’s Israeli anti-terror expert Erran Morad. In the first he interviewed Roy Moore, the disgraced former Senate candidate from Alabama, about a revolutionary new device the Israelis had invented to detect paedophiles. The problem here is that Moore figured out what was going on too quickly for the joke to really stick. Yes, the new device identified him as a paedophile, but so has the media. It would have been a better idea if Roy Moore wasn’t, you know, the nakedly detestable Roy Moore. But it did allow for some gems, such as when he described equality as being a fundamental part of Alabama’s history.

But the best and, typically, most terrifying sketch was saved for the three die-hard Trump-voting Republicans whom Morad recruited for a sting operation to catch Mexican rapists. The plan was to throw a fake quinceañera. One of the men was disguised as a fifteen-year-old girl, wearing a dress, a wig and a fake vagina. Another hid in a piñata, his face covered in KY jelly to deflect Mexican punches. (I swear I’m not making this up.) The guacamole on the table was laced with Rohypnol. By the time the police turned up and found three men covered in lubricant, carrying fake firearms and genitals, one of them wearing a dress, the other holding a video camera, advertising a quinceañera with the offer of “free young p***y” on a roadside billboard, I was so stunned by what I was watching that I could scarcely believe it was real.

Of course, the beauty of Who Is America? is that it is real. These people, possessed of such a fractured, fearful mindset, are perfectly willing to accept the notion that any celebration outside their culture is automatically a ploy to ensnare and rape underage girls. And they’re ready – even eager – to do absolutely anything, no matter how absurd, to attack their perceived enemies. It’s deeply unsettling and frightening and, yes, absolutely hysterical. When Who Is America? episode 3 laboured over that segment, it was masterfully ludicrous. I just wish it chose every target so carefully.