An uneven episode, “The Box” delves deeper into Henry’s past, culminating in a shocking final sequence.

An uneven episode, “The Box” delves deeper into Henry’s past, culminating in a shocking final sequence.

Prison Guard Dennis Zalewski (Noel Fisher) is breaking down. Specifically, his mind is unravelling, something foreshadowed in episode 2. We see this throughout “The Box,” whether he is going through the trappings of his daily grind, confronting Henry (André Holland) in a bar about a random cage sketch, or trying to bond with the Kid (Bill Skarsgård) over their shared incarceration. This last scene, with the awkward fist bump and music shift, implies that more than some awkward male bonding passed between the two. The final scene of the episode brings into question how heavy a hand the Kid had in Dennis’ ultimate breakdown.

Henry, on the other hand, is curious about his past. He’s started having waking dreams with flashes of a dirt floor and chain link. In the process of trying to move his father’s body from its sad final resting place, Henry discusses with Alan (Scott Glenn) the days of his disappearance, as well as his plans to relocate his mother, Ruth (Sissy Spacek), to Houston when he leaves in a week. Shrewdly, Alan pre-plants the idea of moving with Ruth, who is naturally resistant. So when Henry tries to ask her about those eleven days, she snaps at him that she won’t be leaving her home. The beat change here, as with the earlier Alan/Henry scene, is awkward. It is understandable that Ruth would want to avoid discussing the past but the writing in these two scenes is too plot driven. Spacek and Glenn are fantastic actors and the bones of interesting characters are present. Allowing a bit more character development, rather than being random exposition points for Henry, would better serve the narrative. (Fingers crossed that Spacek will get an episode of her own like “Local Color.”)

Speaking of narrative, Henry’s sudden pressing need to uncover the truth of his disappearance leads him down a rabbit trail after Vincent Desjardins, a name he finds in newspaper archives (and certainly familiar to King fans). The Desjardins house is an odd mix of creepy disrepair (a piano fallen through the floor) and practicality (a neatly set breakfast table). Juxtaposing these ideas–the decayed with the functional–is a solid metaphor for Castle Rock itself. Things are certainly broken yet the townspeople carry on, as we see in the entertaining sequence where Molly (Melanie Lynskey) tries to sell the Lacey house, even with an urn in the freezer.

The Desjardins backyard contains a wooden box that certainly could have held a little boy for eleven days. Joseph, Vincent’s brother, has inherited the house and is currently running the worst concept for a barber shop since Sweeney Todd. It turns out Vincent isn’t the concern; not only does Joseph have Henry’s previously missing police file, we learn that he was questioned during Henry’s disappearance. His chief defence? “I never touched you.” It’s an unsettling sequence because the physical space, music, and bizarre nature of the exchange make it feel like Henry is getting answers when actually he is being led in circles. That it takes place in broad daylight makes it more unsettling. 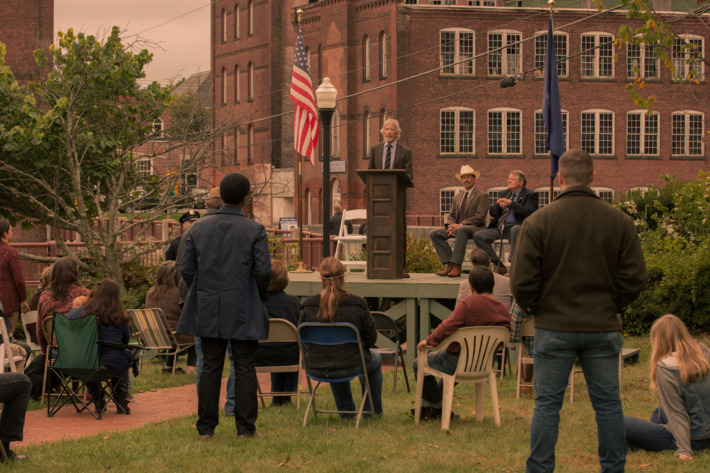 Henry latches onto the Joseph Kidnap idea, rushing to discuss with Alan his failings as Sheriff during the investigation. Alan reveals that Reverend Dever wrote out “Henry did it,” before dying. Shaken, Henry goes to the only person who seems to feel anything other than contempt towards him: Molly. Whatever transpires between them is left unclear, which is fine. More importantly, Henry wakes up the next morning and makes plans to depart Castle Rock. His voicemail for Dennis pushes the young guard over the edge. The sequence that follows is disturbing, mostly due to its shrewd execution.

Dennis hangs up before the voicemail finishes and we are left with only basic sound–jangling keys, pinging electronic buttons, ominous clapping in response to “If you’re happy and you know it, clap your hands.” He returns to the place we have seen him most, looking at Shawshank through the box of monitors. Cue Roy Orbison’s “Crying.” And then we watch Dennis through the monitors, moving from screen to screen, executing his co-workers. It is such an effective scene because it keeps us separate from the action, passive observers squinting at black and white images. When it does switch us to the real action, we see Henry, just arrived at the warden’s office, confused and fearful when Dennis enters gun-wielding and spattered with blood. Henry watches, hands pressed to his ears, as the SWAT team down sad, sweet-faced Dennis, the soundtrack blown out to muffled grinding.

Final thought: “The Box” Bible Verse of the Week, or BVW as I am calling them, comes from Revelations 19:12-13, spouted by the Kid when warden underling decides to threaten him into revealing his name. The verse itself refers to the second coming of Jesus. It, coupled with the possible powers of the Kid, calls to mind John Coffey of The Green Mile. That gentle giant could take away the evils of the world. Does the Kid bring them back?