‘Death of the Inhumans’ #2 | Comic Review

Death of the Inhumans #2 continues the dark demise of the Royals, given additional weight by the feeling that all just might be for real.

Death of the Inhumans #2 continues the dark demise of the Royals, given additional weight by the feeling that all just might be for real.

The history of Donny Cates’s Death of the Inhumans is particularly weird and complex, even by comic book standards. It involves Marvel’s desire to seed the MCU with X-Men-like characters despite not having the rights to any live-action X-Men, the plan for Games of Thrones-style storylines involving a complex web of royal houses, a huge push of several concurrent books, and a disastrous TV series. Now, Death of the Inhumans #2 continues to cull Marvel’s Inhuman-shaped blunder, continuing on from the last issue by visiting even more death and despair upon the Royals.

In Death of the Inhumans #2, Black Bolt seeks revenge for the deaths of Lockjaw, Maximus, and Triton at the hands of the super-Inhuman Kree enforcer, Vox. He’s still presented with the same ultimatum from the Kree Empire: Join or die. And he’s taking it literally.

For once, the “death of” in the title feels like it might be somewhat literal; the behind-the-scenes politicking regarding the property has bled into the material, and with Marvel seemingly eager to properly erase the blemish, and with Cates on-hand to presumably do it with some fanfare, the overwhelming sense of Death of the Inhumans #2 is that most of this s**t is going to be for real. 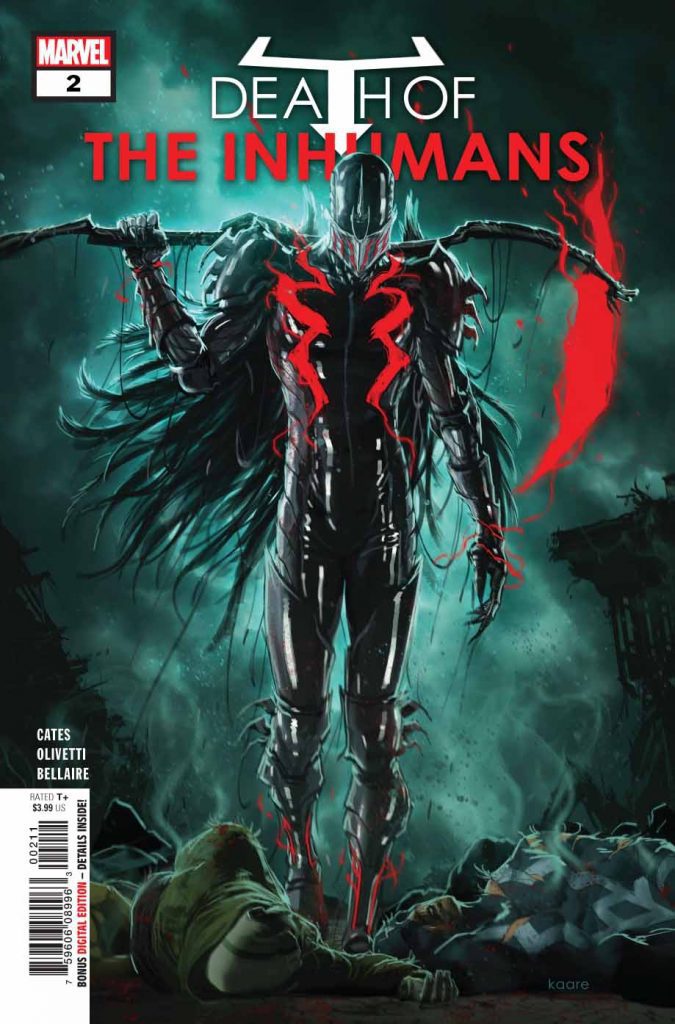 If so, it’s a bold choice. This issue maintains the same dark and heavy tone as the previous, feeling like something atypical of Marvel in the current climate, and weighty enough that the narrative stakes are realer, more concrete than usual. While it’s difficult to build too much sympathy for eugenics-based, formerly slave-owning royalty, it’s rare in comics that events have any kind of permanence, which is what gives the bloody happenings in Death of the Inhumans #2 some real impact, particularly a final panel that I won’t spoil.

And it is bloody. The last issue featured a fair helping of death and carnage, but overall it was relatively heavy on set-up and light on action. Not so here. Death of the Inhumans #2 is a tight, focused issue devoted almost entirely to bloodletting on both sides; Cates isn’t just talking the talk, he’s talking the walk.