It’s rare in the midst of television’s current golden age to come across a show like The Bletchley Circle: San Francisco, which is a proper, old-fashioned turd. I’m almost thankful for it. This week alone, HBO’s Succession and Sharp Objects reached their peaks, Paramount’s Yellowstone found a groove, and the second season of The Sinner arrived on very good form. It’s nice to have something to get properly riled up about.

Except it’s hard to even get riled up about The Bletchley Circle: San Francisco, because it’s just bad in predictable, uninteresting ways. The acting is wooden; the dialogue is leaden with exposition and unfunny jokes and po-faced, toothless social equality bellyaching; and the plot wavers between hilariously contrived and genuinely surprising, but only because the reveals weren’t properly set up, were sped through cursorily and, on further inspection, didn’t make any sense to begin with.

For those who missed the first episode, it ran thusly. Millie (Rachael Stirling), a former code-cracker at Bletchley Park during the war, discovered that a recent murder in San Francisco included the same mysterious symbol that graced the hand of a similar victim who was offed during an introductory flashback. I should note that The Bletchley Circle – much like the original series that was axed several years ago to the detriment of nobody – exists in a strange pocket dimension where serial murderers conveniently leave codes knocking around that explain all their schemes.

So, Millie turns to her old crime-fighting colleague Jean (Julie Graham), who just so happens to have communicated with a code-breaker in San Francisco known as Major Sixth. The two went to San Francisco and discovered that Major Sixth was, in fact, a woman, Iris (Crystal Balint), and Iris had a friend, Hailey (Chanelle Peloso), and all four women set out on the trail of the dastardly, somewhat embarrassingly easy-to-track ruffian. 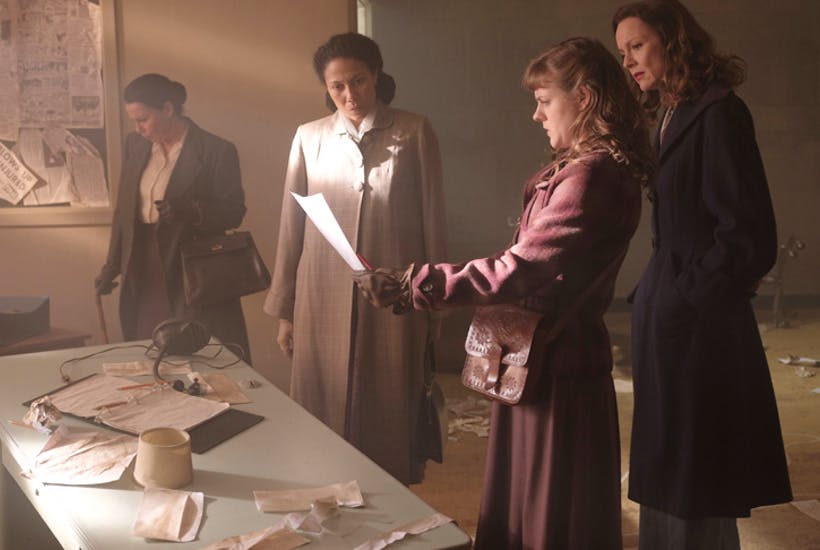 And when I say easy to track, I really mean it – they caught him in this, only the second episode. Well, he essentially caught himself, having revealed himself and his conspirators in one hilariously rushed and jumbled scene that the heroines stumbled into quite by accident. It was nice of him to do their work for them, anyway, especially after the women had spent most of The Bletchley Circle: San Francisco being patronised by various cackling evildoers. (Who were all, of course, white men.)

As far as subtext goes, I’m not sure that highlighting how late-50s America wasn’t particularly ideal for women or black people or, most especially, black women, is a particularly noteworthy viewpoint for a television show in 2018. One could always, I suppose, open a history book – or their eyes. But adhering to the tedious idea of white men being the source of the entire world’s ills at least gives The Bletchley Circle no shortage of villains. It had all the classics, from the disinterested police officer to the property developer who wanted to flatten a predominantly-black neighbourhood in the name of urban renewal.

Now we’re halfway through a season with nothing to show for it, I would at least expect The Bletchley Circle: San Francisco to dream up something at least resembling character development and a proper narrative arc, rather than 85 minutes of gawping at charts and 5 minutes of having the baddies stroll in and awkwardly reveal themselves without warning. As it stands the show is like a game of Cluedo, but there’s only one character and he rolls the dice himself.