Better Call Saul returns with “Smoke”, which is a depressing episode but for all the right reasons.

Better Call Saul returns with “Smoke”, which is a depressing episode but for all the right reasons.

Better Call Saul returns and in miserable fashion. The onset of depression the episode provides is understandable due to Jimmy having to deal with the loss of Chuck. In case you missed it, Season 3 ended with Chucky leaving an oil lantern flaming, and whilst he was sleeping away in bed, it tipped over and set his house on fire. The finale left whether or not he died as a cliffhanger. Well, “Smoke”, the premiere episode of Better Call Saul Season 4, confirms he has died.

This is a loss that needed to happen eventually, though it feels like a heavy one. By watching Better Call Saul you understand that everything is pre-determined slightly due to it spinning off as a prequel to Breaking Bad. The two lawyer brothers have been at war, whether politely or in an uncivilised manner since the first season, but it is time to move, as Jimmy will clearly have bigger, more illegal fish to fry. What “Smoke” did confirm once again is that Jimmy is clearly emotionally manipulative and he is not a character I would like in my life. As a character on TV, I do not mind him.

Better Call Saul Season 4 will be without Chuck McGill. We will miss his non-existent disease of being allergic to electricity. It was so bizarre, his mental condition, but it made great television in the sense that the actor Michael McKean pulled it off convincingly, making us believe the character actually believed it. Whether he did or not, I guess we will never truly know. 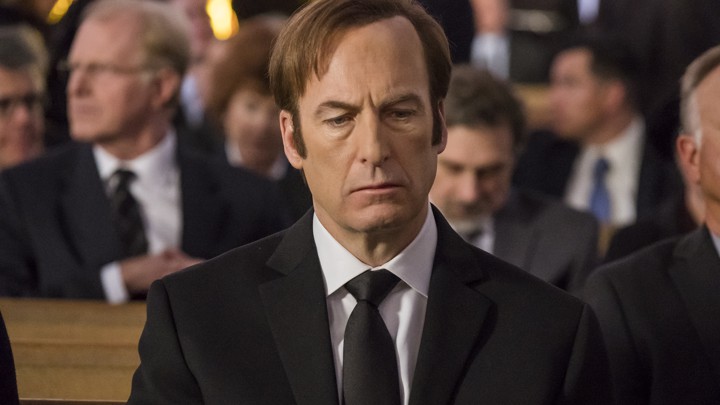 “Smoke” was deliberately depressing, showing an almost despondent Jimmy, who only moved with energy when he was served a shot of tequila by his fed up and injured partner, Kim. The show represented the phase of early grieving convincingly, reducing the use of movement and sound and allowing the silent space to demonstrate that Jimmy is in the early part of the process. However, as usual with Jimmy, his grievance has to mean something more in benefit to him, so when Howard feels guilty for Chuck’s death, he does not do the human thing and comfort him but in spite, he provides an off-hand comment and walks away smiling whilst feeding his fish, much to the shock of Kim.

Meanwhile, Mike does lighten up “Smoke” slightly when he finds what I believe to be a medical bill from a company named Madrigal at the house his close family live in. He takes it upon himself to recon inside the company and embarrasses them about their security standards. This part of the story was not resolved, making us wonder what he will do next week. Also, “Smoke” does give a slice of action regarding Nacho’s attempted assassination of Hector from the end of Better Call Saul Season 3, but it did not really move, with Gus seemingly suspicious about the pill swapping motion in his hands.

As I close out this recap, it’s interesting that Better Call Saul Season 4 opened up with the usual black and white forward-flash into Jimmy’s future. I always find it unusual and sometimes forget that this ties into Breaking Bad and that one day, the two timelines may merge when Walter is introduced. I feel we are still far away from that, but as “Smoke” demonstrated, we are getting closer. The opening episode was a successful return.