While Doomsday Clock will likely provide a stunning and incredible wrap-up to the series, the wait for issue 12 is long, and the team needs to pick the energy up for the remaining 6 issues.

While Doomsday Clock will likely provide a stunning and incredible wrap-up to the series, the wait for issue 12 is long, and the team needs to pick the energy up for the remaining 6 issues.

It takes a lot to get me excited about a comic book these days, but Doomsday Clock ticked all the boxes.

As a huge fan of Gibbon’s and Moore’s masterpiece, and someone who remembers reading it when it was released, Watchmen has always held a special place in my heart. The 12-issue series has quite rightly secured its place in comic book history, and that, we thought, would be that.

A mismanaged attempt to breathe new life into the characters of that story arrived in 2012, with a who’s who of comic creators delivering the Before Watchmen line; prequels to Watchmen focusing on the characters in the original work.

It had varying degrees of success, and has since fallen down the memory hole. Jump to 2017 and we were thrilled to see the announcements that Geoff Johns would be in control of bringing the Watchmen crew kicking and screaming into the DC Universe.

Well, we are 6 issues in, and I thought you might appreciate a few words on how the series is going. 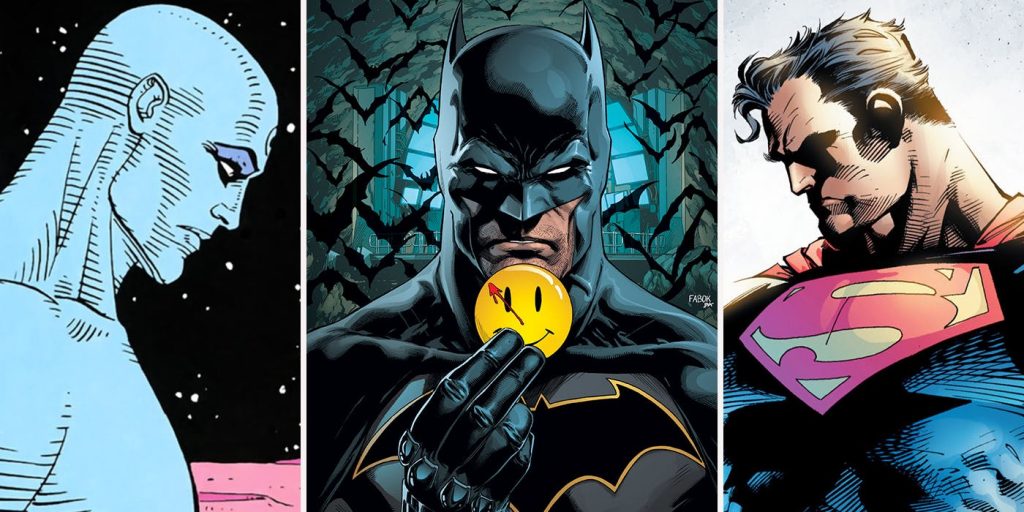 I don’t want to spoil Doomsday Clock for you, so I will do my best to avoid major plot points and reveals, just in case you are waiting for the trade to catch up with this.

Issue #1 opens with the Watchmen world in disarray. It’s 1992 and things have not gone well since Rorschach’s journal has revealed that Ozymandias was behind the invasion of Earth at the end of Watchmen.

We see riots in the streets and an escalation of events that is leading to a destructive end to that world, and more shockingly we see Rorschach himself, even though we know he should be dead.

This is a conceit that Johns uses well in Doomsday Clock. It builds mystery very early on and as a reader, we already begin to ask questions of this world.

By the end of the first issue, we have seen Ozymandias and Rorschach, been introduced to Mime and Marionette (new villains), seen glimpses of Nite Owl and mentions of Doctor Manhattan, and we get a 4-page outro featuring Lois and Clark. It’s a great start to the series, tightly written with art by Gary Frank that is evocative of Gibbons’ style, and sticking rigidly to the 9-panel grid that Watchmen itself was presented in. The first page itself looks and feels like the first page of Watchmen issue #1, and this is a structure that permeates every issue so far.

Issue 2 begins the fascination that Johns has with his new villains Mime and Marionette. The duo seem like Joker and Harley knock-offs, but as the issues progress you get the feeling that they are going to play a very important part in proceedings. The pair of violent sociopaths feature heavily here, and we see them encounter Dr. Manhattan for the first time. DC fans are rewarded this issue as we see Lex Luthor and Batman take their places, with the Watchmen characters bleeding into iconic locations like The Batcave. 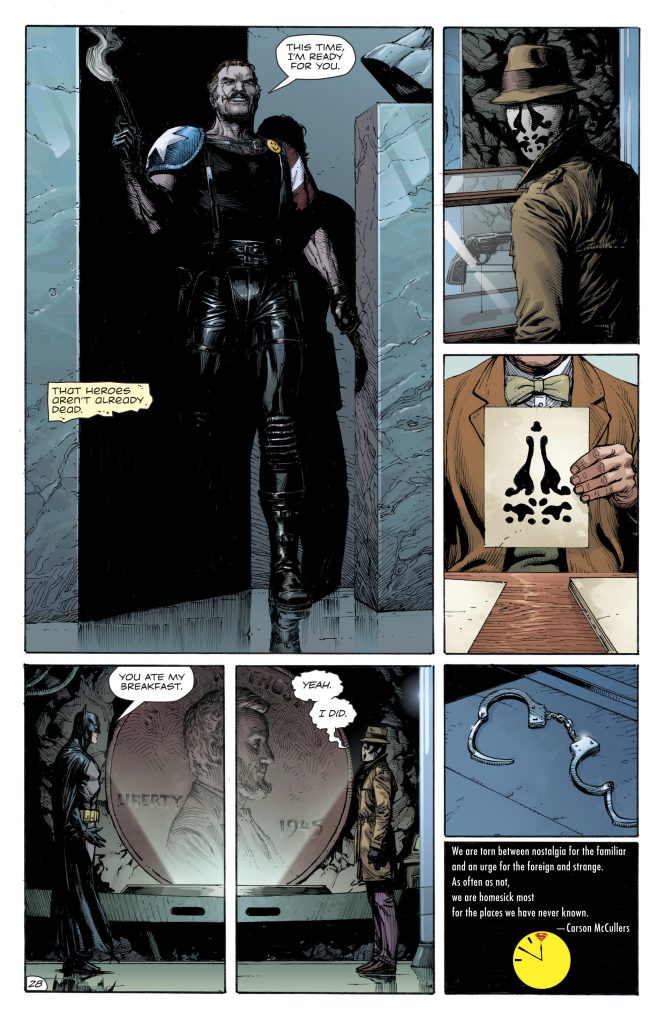 So far the creative team behind Doomsday Clock have hit a lot of beautiful notes, and issue 3 starts with a reveal that will shock the fans of the original series. We get more Batman interaction and a surprise reveal from Rorschach. There is more from Mime and Marionette, enforcing my observations on the pair and how important they may be, and there’s another shock ending that comes from nowhere and makes perfect sense.

Johns is so far batting 3 for 3; the series has plenty of mystery and the artwork seems to actually improve each issue.

Issue 4 focuses on Rorshcach and explores a bit more of the Watchmen mythos, and is a slower issue that concentrates on character more than the overarching plot. It’s the first issue that falls a little flat, but only because the previous issues have been so good.

Now, here’s a fly in the ointment. DC has decided by now that Doomsday Clock will appear every 2 months. It seems that the dreaded deadline doom struck the creators, and not wanting to rush the art, replace the artist or reduce the page numbers in any way, the only way forward was a bi-monthly schedule. Talk about taking your foot off the accelerator. Two months between issues really act as quicksand for a series and trust me when I say it’s impossible to read a new issue of this series without going back to re-read the previous one. Some readers may be put off by this, and issue 5 also seems to be slowing things down. There is some nice stuff with the DC stars, and a great Joker entrance, but the story seems to be folding in on itself just now, and along with a 2-issue wait between issues, it felt slightly unsatisfying.

Issue 6 is just out, and once again Mime and Marionette take center stage, despite a lot of super villain Easter Eggin all over the place. Batman is unconscious for the whole issue and sadly it feels that at the middle of this series, the engine has stalled. The story is getting bogged down with the detail, and we really need more input from the characters we paid to see, The Watchmen. To be honest I’m not sure where the whole thing is going. I expect some face off with Dr Manhattan and Superman is imminent, but just now something needs to happen to keep this train moving forward. It’s a blast to see the integration of the universes here, and the art is spectacular, but Johns better have an ace up his sleeve as I can envisage regular readers dropping this book and waiting for the trade, which won’t be out until at least 2019.

For the record, I’m hanging in there with Doomsday Clock. It’s a special book that is head and shoulders above most others being published, and the art alone is worth the price of admission. It is definitely aimed at Watchmen fans but frustratingly, it often leaves them in the shadows. However you have to admire the sheer ambition of the project, so I will continue to support it.