With the arrival of the Kid in Castle Rock, Castle Rock shifts gears, finding its footing “Harvest”, in a visually strong episode.

With the arrival of the Kid in Castle Rock, Castle Rock shifts gears, finding its footing “Harvest”, in a visually strong episode.

The year is 2016 and Henry (André Holland) has a battery of tests run to diagnose some undisclosed auditory issue. In the present, the gunfire of last week’s massacre still rings in his ears. Five days after poor Dennis Zalewski (Noel Fisher) brought Hell with his handgun to Shawshank, wildfires rage through a myriad of Castle named towns, his client’s hearing has been postponed, and his adopted father’s remains have succumbed to something particularly gruesome called exploding casket that involves dripping goo. Sound is certainly a prominent component in Castle Rock, be it Henry’s noises or Molly’s (Melanie Lynskey) telekinesis. How those connect to each other, and the other mysteries of their past, certainly is intriguing.

Elsewhere in “Harvest”, Warren Porter (Ann Caster) is reevaluating every career choice that brought her to Shawshank. A brisk tongue-lashing from her superior to handle the Kid (Bill Skarsgård) in whatever way necessary dumps the Kid in grey sweats outside the gates of Shawshank, free at last. This is of course after a probation video advocates that parolees “Reframe your narrative,” “Tell your own story,” “Be your own hero,” and “Chose the life you want to live.” What that means to the Kid, who doctors claim is suffering from retrograde amnesia, who knows.

The crucial point of “Harvest” is the extension of the Kid’s power as he is unleashed upon the world. With fires creeping ever closer, Henry must find a place to stash his newest client as they wait for a bed at Juniper Hill hospital. He elects Molly’s office, an oddly empty building that gives a great deal of space to one so long in confinement. Until now, in fact, the Kid has been shown folded into cells or chairs, an origami man with never blinking eyes and blank expressions. Seeing him unfold to his full height outside the gates of Shawshank is unsettling.

Even more unsettling is the sheer impact of the Kid on people. After dark, he skulks through the streets of Castle Rock, letting himself into a random house where, shrouded in shadow, we watch the Kid as we hear a child’s birthday party turn from gleeful to violent. What is so brilliantly disturbing about the Kid thus far is how we never see him actually do, well, pretty much anything. Certainly, his figure is ominous, but the greater power is what happens to those around him unfortunate enough to stumble into his radius. For Molly, the telekinetic noise of being near to him as he stands against the golden ash-filled sky is deeply terrifying, listening to “the pain of everyone in this town, all at once.” Violence, chaos, death–something wicked this way comes. 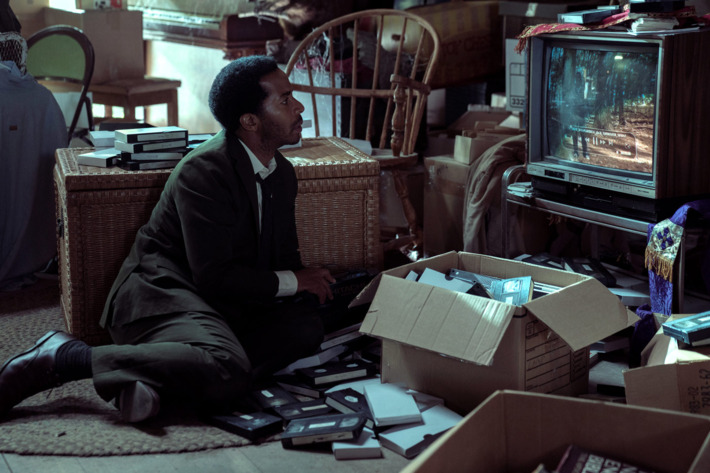 I had previously bemoaned the lack of viable narrative awarded to Alan (Scott Glenn) and Ruth (Sissy Spacek). This week did give them an escalated sense of value within the story. Her mental frailty, and his deep love for her, is visible not just to the viewer, but Henry as well. Alan’s struggle becomes that much clearer–he had tried to marry Ruth years before only to be rejected. Now he finds himself watching her slip further away from him. Her leap from the bridge during Alan’s honour ceremony seems like a red herring. Maybe it is to do with the Kid; it seems more likely that this is just further demonstration of deterioration.

Jackie Torrence (Jane Levy) has danced on the fringes of the narrative, a minor character with no real purpose within the story. We find out her connection to the infamous Jack Torrence and her role as the ultimate fangirl for all trauma in Castle Rock’s past, as she spends an afternoon smoking pot with the Kid. (I recently read that King thinks people should stop looking so heavily for Easter Eggs. I’m all for that, but the writers need to stop inserting things like a character named Jackie Torrence who talks about her axe-wielding uncle, Jack. Come on.)

Our final big reveal in “Harvest” is that Alan and the Kid have met before. Twenty-seven years before, to be exact. Alan was younger then. The Kid was not, as he was stowed in Warren Lacey’s trunk. “Are you the devil?” Alan demands of the ageless Kid. His beef is not that someone let the devil out of his box, but that the Kid should remain forever young while Ruth crumbles bit by bit. Yet the Kid can help her, he promises. At what cost, we must wonder.

“Harvest” was the fifth episode of Hulu’s Castle Rock. Check out our full series coverage.