Marvel’s First Family return in Fantastic Four #1, a masterful, triumphant issue which feels as momentous a reintroduction as the team deserve.

Marvel’s First Family return in Fantastic Four #1, a masterful, triumphant issue which feels as momentous a reintroduction as the team deserve.

It has been almost three years since the First Family of Marvel Comics were actually together, properly, in a Marvel comic. Today, August 8, 2018, 57 years after their first adventure and right on time for a new one, Fantastic Four #1 debuts with the creative team of Dan Slott, Sara Pichelli, and Marte Gracia as part of Marvel’s on-going “fresh start” initiative.

And Fantastic Four #1 feels like a fresh start, albeit one enriched by over half a century of beloved history. This is a comic that revels in the long-standing relationships between these iconic characters, burning their connection for fuel. In the absence of Reed and Sue, Johnny Storm and the Thing are trying to live their lives; the former in hopeful denial, and the latter trying to replace the sense of family and togetherness that he now lacks. 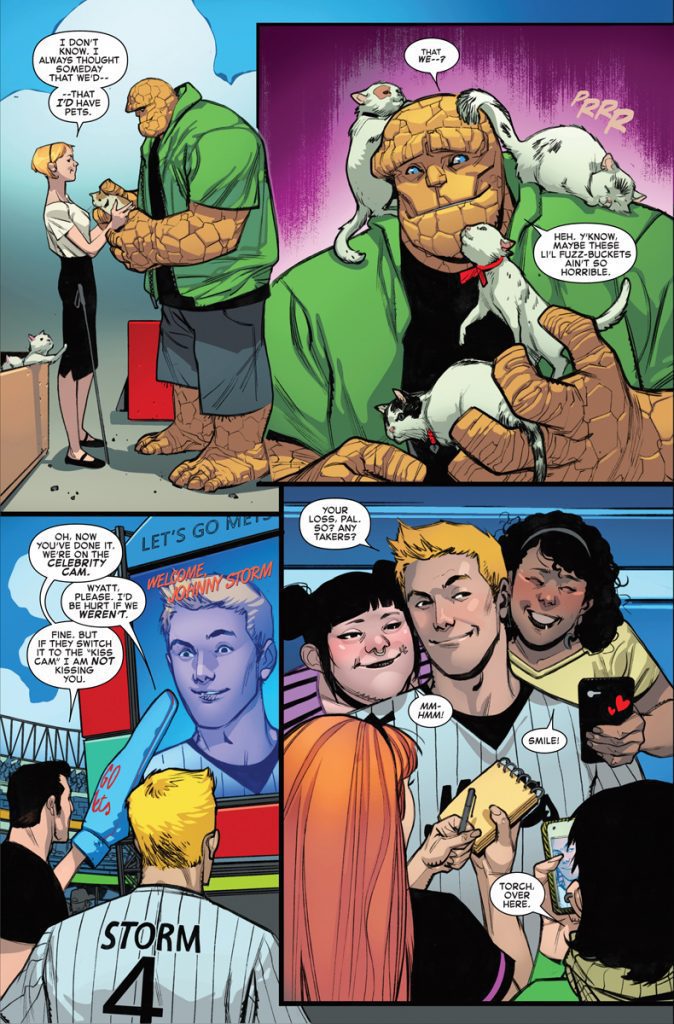 It manifests in different ways. When a gang of kids set off a fake Fantastic Four beacon, creating a moment of hope that the family will return, the contrasting reactions are brought into sharp relief by artist Sara Pichelli, whose sublime grasp of the characters really enhances Slott’s storytelling in Fantastic Four #1 through the nuances of body-language and expression. For the Thing, the beacon only confirms that Reed and Sue aren’t ever coming back; it inspires him to recount a prior adventure, and to propose to Alicia Masters. But for Johnny, that slim possibility that they’re out there drives him out-of-character, demanding unduly harsh punishments for the kids who set off the beacon, and being aggressively resentful of the Thing’s desire to move on.

Fantastic Four #1 plays with expectation and disappointment masterfully, in service of a climax so well-delivered that it literally gave me goosebumps. It takes a little while to get there, and the issue does tend to meander ever so slightly, but the strong emotional core of the Fantastic Four, their bonds, hopes and worries, keeps the notion of family as the lynchpin of their triumphant return.