Season 4 takes the familiar faces of Ballers to a new city with the promise for new developments in the premiere, “Rough Ride”.

Season 4 takes the familiar faces of Ballers to a new city with the promise for new developments in the premiere, “Rough Ride”.


Ballers may be the ultimate placeholder series. When it first debuted in 2015, it followed up the conclusion of an insane Game of Thrones season (“Shame!”). As the show has been renewed, it has pushed later into the summer, following those dramatic HBO series’ that leave us gutted and tiding viewers over until a stronger series, football season, and possibly the next Rock movie come along. Even the show’s timelines run in fictional off-seasons.

The show, however, isn’t just a placeholder in the current series; it could also be a placeholder for another fantasy male lifestyle show, Entourage. Those who watched Entourage (also produced by Mark Wahlberg) in their dorm rooms or roommate-packed apartments can now tune in after the kids are in bed to watch modern gladiators struggle with middle age against the backdrop of sports. Instead of actor cameos, we have athlete cameos. Even the female characters have many of the same traits–hot (not just pretty, but hot), smart, tough (and always slightly bitchy) but generally just side stories to the real journey of the male lead characters. And of course the occasional drugs and boobs. Perhaps that is why I have a soft spot for Ballers with its well-cut suits and fast cars–like most things associated with Dwayne “The Rock” Johnson, it has a savviness in understanding its demographic. There also isn’t a chance that my heart is going to get pulverized by the gruesome death of a major character. We all need off-season.

When we last we saw the boys, Spencer (Dwayne Johnson) and Joe (Rob Corddry) had turned down the offer to be part of the team bringing football to Sin City, despite literally spending the entire season trying to do just that. Spencer has integrity, after all. Instead, they returned to the agency to save jobs and expand like mad (this is actually one of the things that bug me about Ballers–the final scene of each season always feels like a such a throw away). Ricky Jerret (John David Washington, currently winning raves for BlacKkKlansmen) decided to give up football, which was breaking his mind and body a piece at a time, to be a daddy. And Charles Greane (Omar Miller) was making a go for a General Manager position with the LA Rams. 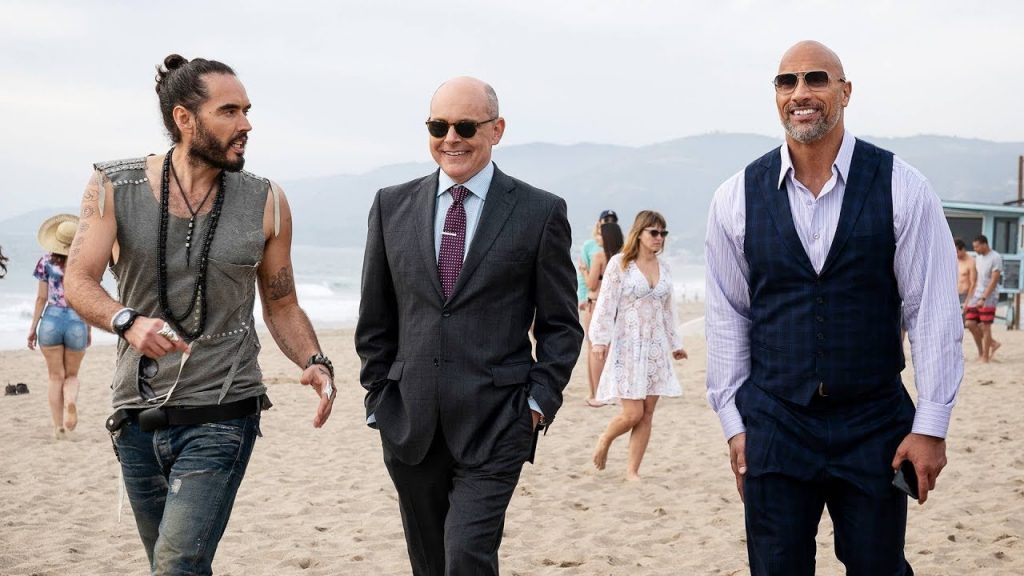 Season 4 opens with all our key players gathered together for some pricey wine and a send-off as Charles heads west for his new gig. It’s a fun scene that highlights all the Miami neon that is so quintessentially Ballers. One month later in LA, the glow has dimmed. Spencer and Joe are in town for meetings including one with extreme sports mega-man Lance Klian (Russell Brand). Brand is everything you would expect in this role–motor-mouthed and frantic, spewing sexual innuendo from under his wild mop of hair–in essence, a perfect foil for controlling, buttoned-up Spencer. The deal seems like a perfect expansion, save Spencer’s hang-up about LA due to his brother’s suicide. On the upside, Spencer receives a phone call from his season 3 nemesis Candace Brewer (Emayatzy E. Corinealdi) congratulating him on his place on the NFL Hall of Fame ballot. Ballers often mirrors recent sports scandals, so this may be the Terrell Owens shout out for the season.

Poor Charles experiences his own growing pains as the new big man for the Rams, where the lack of both cookies and blitzing have employees pushing against his You Win In the Locker Room approach to management. His promise that they will all keep their jobs is most definitely going to prove premature. Meanwhile, Ricky is house hunting with Amber (Brittany S. Hall) and TTD (Carl McDowell), who will all apparently be living together with the new baby in some sort of “it takes a village” arrangement. Not surprisingly, baby girl hasn’t cut teeth yet and Ricky is looking to get back into the league. Sad times that the Browns are currently his only option. With Charles at the Rams and Ricky in LA, we all know that will soon change.

By episode’s end, Spencer has decided to stay in LA to face his demons over his brother’s death and try to wrangle what will surely be a thorny deal with Lance. He is also supposed to scout a promising high school QB, but his interest is more about the kid’s mom (Joy Bryant). These pieces, along with the Hall of Fame, look like our character arc for the season. Past seasons have set up similar things (CTE, fatherhood), only to see Spencer remain fundamentally the same by season’s end. Let’s see if this off-season Spencer can grow something besides his wallet.